A new bombshell report by Rolling Stone, titled “Inside Taylor Hawkins’s Final Days as a Foo Fighter,” makes the disturbing claim that the legendary drummer was on the brink of exhaustion from playing physically taxing, nearly three-hour shows, and at the time of his death was considering scaling back his Foos duties or even quitting the band entirely. Hawkins died at age 50 on March 25, just hours before the Foo Fighters were scheduled to play Festival Estéreo in Bogotá, Colombia.

“Honestly, I think he was just so tired. Tired of the whole game,” blues singer Sass Jordan, for whom Hawkins drummed in the ‘90s, told Rolling Stone. Jordan also recalled Hawkins venting to her, “Oh, my f***ing God. I can’t look at the goddamn tour schedule. It gives me anxiety.” At that time, there were 62 dates on the Foo Fighters’ calendar for 2022, throughout North America, South America, Europe, and Australia.

Rolling Stone conducted more than 20 interviews with Hawkins’s friends and colleagues, among them Jordan, Pearl Jam drummer Matt Cameron, and Red Hot Chili Peppers drummer Chad Smith. Foo Fighters frontman Dave Grohl and the other surviving Foos declined to be interviewed for the piece; their publicist and management denied the allegations to the magazine’s four reporters, and have not yet responded to Yahoo Entertainment’s request for comment. While Jordan has retweeted Rolling Stone’s article in a seeming show of support, both Cameron and Smith have blasted the publication — alleging that they were misled to believe they were contributing to a celebratory Hawkins retrospective, not an exposé. 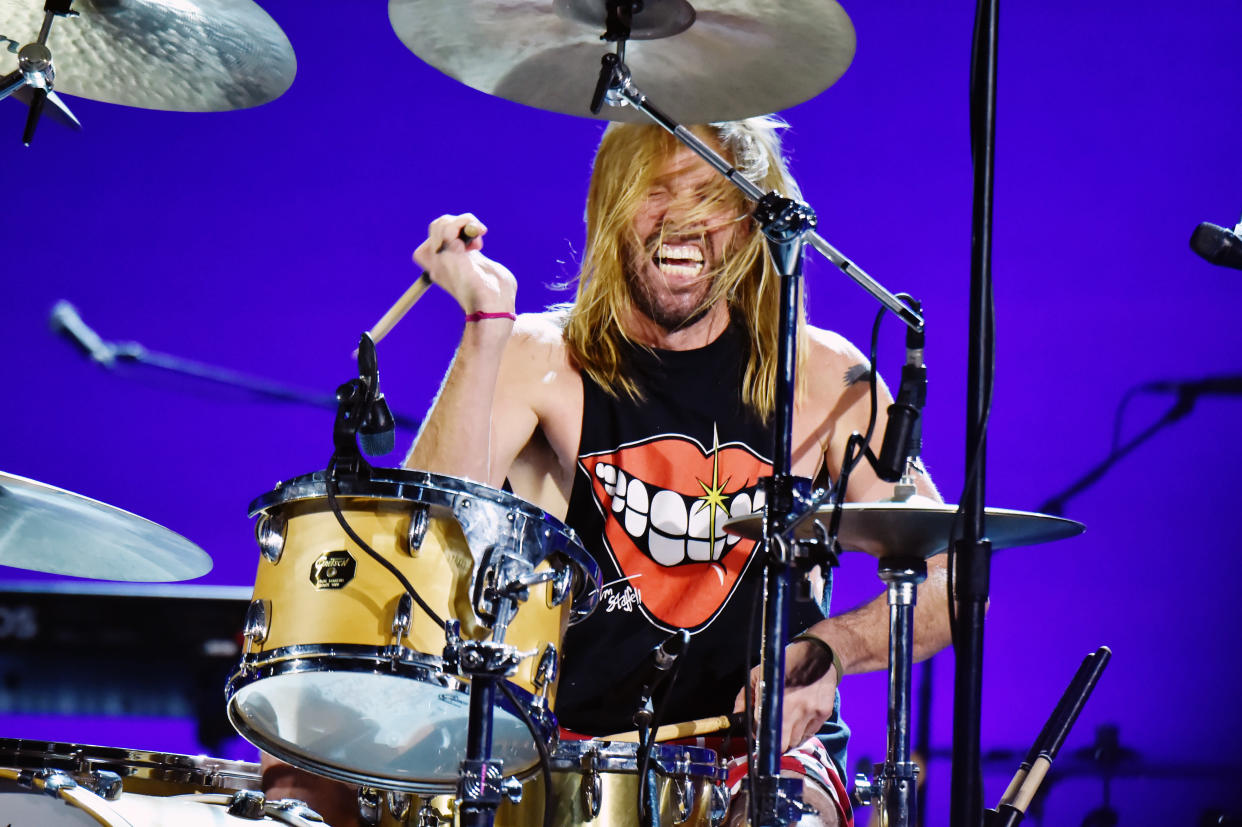 “Taylor was one of my best friends and I would do anything for his family. I was asked by Rolling Stone to talk about Taylor for a tribute article and I certainly didn’t expect it to be a piece about his last days. Had I known that, I never would have talked to the magazine, and I apologize for any pain my participation in the article may have caused his family and his musical friends. I miss him every day,” Smith exclusively told Yahoo Entertainment. Cameron posted a statement on Instagram expressing similar regret: “When I agreed to take part in the Rolling Stone article, I assumed it would be a celebration of his life and work. My quotes were taken out of context and shaped into a narrative I had never intended. … I am truly sorry to have taken part in this interview and I apologize that my participation may have cause harm to those for whom I have only the deepest respect and admiration.”

The Foo Fighters were one of the first actively touring bands to get right back onstage once COVID restrictions eased up in 2021, starting with a six-song set at SoFi Stadium’s Vax Live all-star event on May 2, followed by a full 23-song show at the 610-capacity Canyon Club in Agoura, Calif., to celebrate the “reopening” of Los Angeles County nightlife on June 15. Rolling Stone actually interviewed Hawkins at his L.A. home that June morning, at which time he confessed that he was “really nervous” about the intimate club gig. “I have major stage fright, major, major, major. Like today is like, I’m in hell right now,” he said. Hawkins also mentioned that he had sleep apnea and an enlarged heart (or “a runner’s heart”) and was “trying really hard to figure out how to continue to keep the intensity of a young man in a 50-year-old’s body, which is very difficult.” However, he assured the publication that he’d recently had “everything checked” by a doctor and was told he was in “amazing shape.”

By mid-2021, it was all systems go for the Foo Fighters. While other bands of their age were still easing back into post-pandemic life and had few dates on the books, the Foos reopened New York’s Madison Square Garden just five days after the Canyon Club show; headlined several festivals, including Lollapalooza; received the Global Icon Award at the 2021 MTV Video Music Awards; and were inducted into the Rock & Roll Hall of Fame’s Class of 2021 by Paul McCartney. They also theatrically released a horror-comedy flick, Studio 666, and performed at the movie’s premiere afterparty at Hollywood’s Fonda Theatre. Overall, the band played about 40 shows in 2021, and as Hawkins looked ahead to their even more packed 2022 schedule, he “knew he didn’t have it in him" but "was trying to deliver,” according to another Hawkins colleague who spoke to Rolling Stone on the condition of anonymity.

“There’s only a handful of guys in our profession that still play this intense, high-energy ‘90s rock music,” Cameron explained to Rolling Stone. “We both had to strike that balance of ‘we never want to complain,’ but there are real, specific things about what we do that’s really f***ing challenging and really difficult. … It’s like we have to be able to sort of run a marathon every time we hit the stage, just because the music sort of calls for that type of energy.”

Cameron also told Rolling Stone that Hawkins “had a heart-to-heart with Grohl and, yeah, he told me that he ‘couldn’t f***ing do it anymore’ — those were his words.” The story’s anonymous source corroborated Cameron’s account, saying, “The fact that [Hawkins] finally spoke to Dave and really told him that he couldn’t do this and that he wouldn’t do it anymore, that was freeing for him. That took f***ing balls. That did take a year of working up the guts to do.” However, Cameron added, “I guess they did come to some understanding, but it just seems like the touring schedule got even crazier after that. … [A band like the Foo Fighters] is a big machine [with] a lot of people on the payroll. So you’ve got to really be cognizant of the business side of something when it’s that big and that has inherent pressure, just like any business. … He tried to keep up. He just did whatever it took to keep up, and in the end he couldn’t keep up.”

According to Rolling Stone quotes attributed to Smith, Hawkins lost consciousness on board a Chicago plane in December 2021. “He just said he was exhausted and collapsed, and they had to pump him full of IVs and stuff. He was dehydrated and all kinds of stuff,” Smith said. After this health scare, which was “one of the straws that broke the camel’s back,” Smith said Hawkins told him, “I can’t do it like this anymore.” Smith also revealed that in his final few months, Hawkins “was getting into lifting weights and drinking these electrolytes and was really trying to do things to help play at the level that he wanted to play at,” and recalled a time when Hawkins confessed to him, “Man, I hurt. My body hurts.”

Hawkins's final concert with the Foo Fighters was at Lollapalooza Argentina on March 20, 2022. Five days later, he was found dead in his Bogotá hotel room before the band was set to headline the Estéreo Picnic Festival. (In lieu of that performance, candles were placed onstage to honor Hawkins.) Four days later, the Foo Fighters indefinitely canceled all of their future shows "in light of the staggering loss of our brother.” Hawkins's official cause of death has still not been revealed.