EL PASO, Texas (AP) — Migrants along the U.S. border with Mexico sought shelter from the cold early Wednesday as restrictions that prevented many from seeking asylum in the U.S. remained in place beyond their anticipated end.

The U.S. government asked the Supreme Court on Tuesday not to lift the limits before Christmas, in a filing a day after Chief Justice John Roberts issued a temporary order to keep the pandemic-era restrictions in place. Before Roberts issued that order, they had been slated to expire Wednesday.

Just after midnight, when Title 42 was supposed to be lifted, all was quiet on the banks of Rio Grande in El Paso where the Texas National Guard was posted. Hundreds of migrants had gathered by the concertina wire put up by the Texas National Guard but left earlier in the evening after being told by US officials to go to a gate to be processed in small groups.

First Sergeant Suzanne Ringle said one woman went into labor in the crowd on the riverbank and was assisted by Border Patrol agents. She added many children were among the crowd.

In the Mexican city of Juarez, across the border from El Paso, hundreds of migrants remained in line hoping that the restrictions would be lifted and they would be let through.

In Tijuana, which has an estimated 5,000 migrants staying in more than 30 shelters and many more renting rooms and apartments, the border was quiet Tuesday night as word spread among would-be asylum seekers that nothing had changed. Layered, razor-topped walls rising 30 feet along the border with San Diego make the area daunting for illegal crossings.

Under the restrictions, officials have expelled asylum-seekers inside the United States 2.5 million times, and turned away most people who requested asylum at the border, on grounds of preventing the spread of COVID-19 under a public health rule called Title 42. Both U.S. and international law guarantee the right to claim asylum. 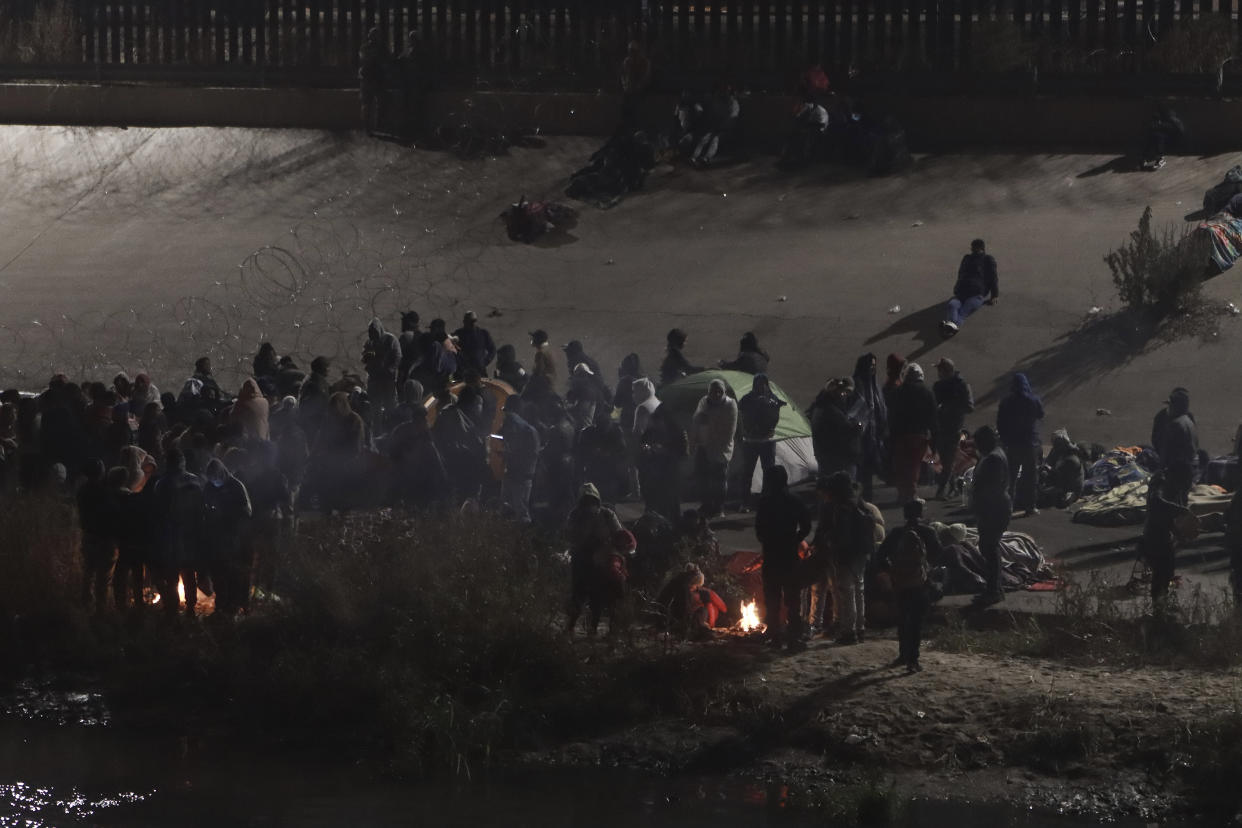 The federal government also asked the Supreme Court to reject a last-minute effort by a group of conservative-leaning states to maintain the measure. It acknowledged that ending the restrictions will likely lead to “disruption and a temporary increase in unlawful border crossings,” but said the solution is not to extend the rule indefinitely.

With the decision on what comes next going down to the wire, pressure is building in communities along both sides of the U.S-Mexico border.

In El Paso, Democratic Mayor Oscar Leeser warned that shelters across the border in Ciudad Juárez were packed to capacity, with an estimated 20,000 migrants prepared to cross into the U.S.

At one point late Tuesday, some migrants were allowed to enter in batches through a gate in the border wall between two bridges that connect downtown El Paso with Ciudad Juarez, which is not uncommon at this spot on the border. Word that the gate was opening sent hundreds of people scrambling along the concrete banks of the Rio Grande, leaving smoldering campfires behind.

The city rushed to expand its ability to accommodate more migrants by converting large buildings into shelters, as the Red Cross brings in 10,000 cots. Local officials also hope to relieve pressure on shelters by chartering buses to other large cities in Texas or nearby states, bringing migrants a step closer to relatives and sponsors in coordination with nonprofit groups.

“We will continue to be prepared for whatever is coming through,” Leeser said.

Texas National Guard members, deployed by the state to El Paso this week, used razor wire to cordon off a gap in the border fence along a bank of the Rio Grande that became a popular crossing point for migrants who waded through shallow waters to approach immigration officials in recent days. They used a loudspeaker to announce in Spanish that it's illegal to cross there. 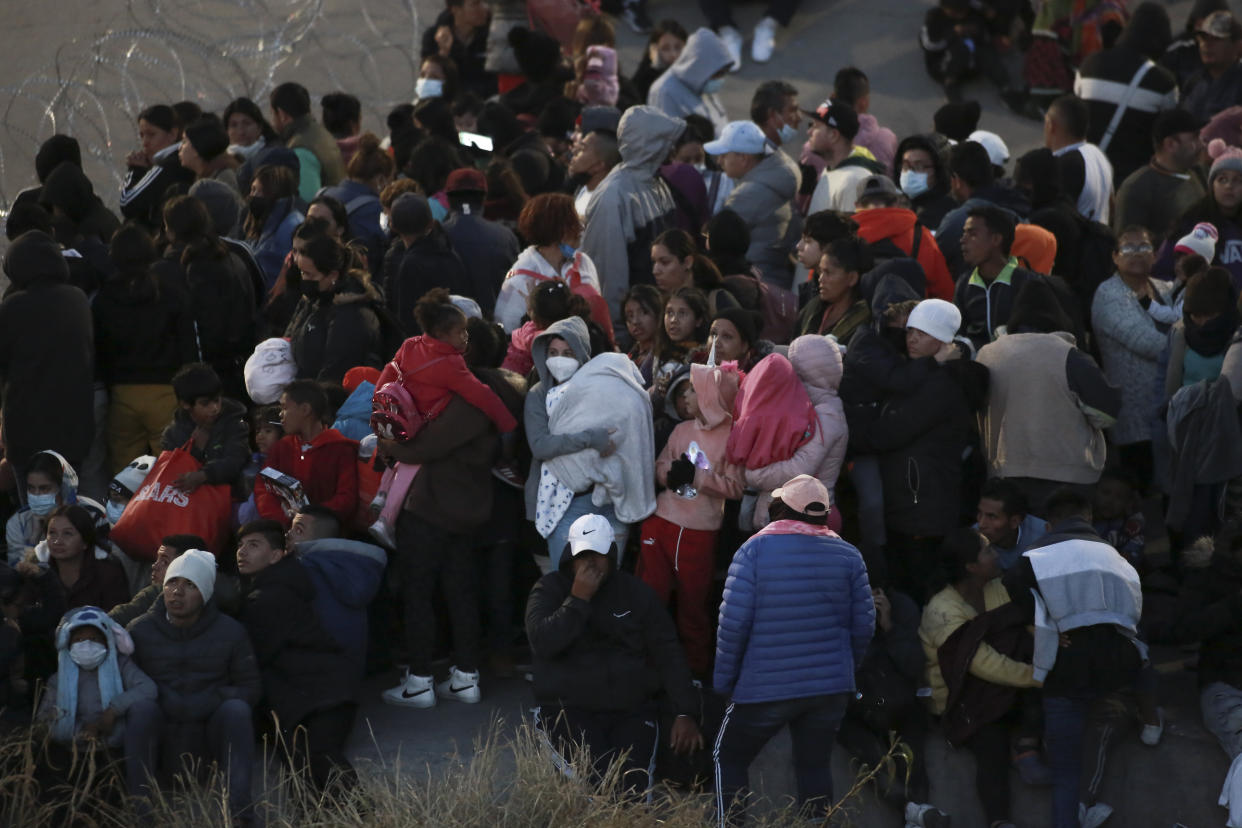 Texas said it was sending 400 National Guard personnel to the border city after local officials declared a state of emergency. Leeser said the declaration was aimed largely at protecting vulnerable migrants, while a statement from the Texas National Guard said the deployment included forces used to “repel and turn-back illegal immigrants.”

In San Diego, a sense of normalcy returned to the nation's busiest border crossing despite uncertainty leading up to Roberts’ decision. The San Ysidro Chamber of Commerce said it learned from U.S. Customs and Border Protection that the more modern, western half of the airport-sized pedestrian crossing would reopen to U.S.-bound travelers Wednesday at 6 a.m. The lanes, which lead to an upscale outlet mall, have been closed to almost all migrants since early 2020 to accommodate Title 42 processing.

The reopening comes “just in time for last-minute shoppers, visiting family members and those working during the holidays,” the chamber wrote to members. It said it didn’t know when the area would reopen to travelers going to Mexico from the United States.

Immigration advocates have said that the Title 42 restrictions, imposed under provisions of a 1944 health law, go against American and international obligations to people fleeing to the U.S. to escape persecution, and that the pretext is outdated as coronavirus treatments improve. They sued to end the use of Title 42; a federal judge sided with them in November and set the Dec. 21 deadline.

Conservative-leaning states appealed to the Supreme Court, arguing that an increased numbers of migrants would take a toll on public services such as law enforcement and health care and warned of an “unprecedented calamity” at the southern border. They said the federal government has no plan to deal with an increase in migrants. 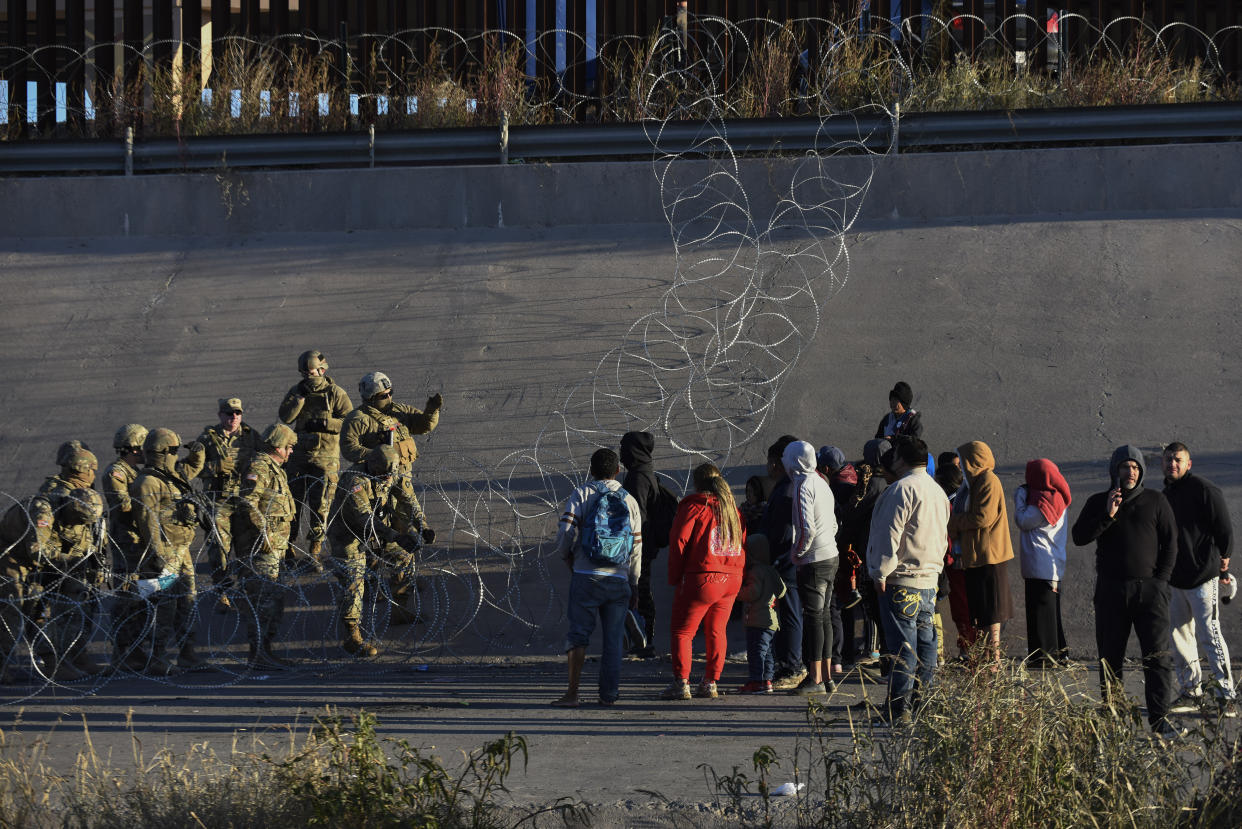 The federal government opposed the appeal, and told the court Tuesday that it has marshaled more resources to the southern border in preparation for the end of Title 42. That includes more Border Patrol processing coordinators, more surveillance and increased security at ports of entry, according to President Joe Biden's administration.

About 23,000 agents are currently deployed to the southern border, according to the White House.

“The solution to that immigration problem cannot be to extend indefinitely a public-health measure that all now acknowledge has outlived its public-health justification," the Biden administration wrote in its brief to the Supreme Court.

At a church-affiliated shelter in El Paso a few blocks from the border, the Rev. Michael Gallagher said local faith leaders have been trying to pool resources and open up empty space. On Tuesday, a gym at Sacred Heart Church gave shelter to 200 migrants — mostly women and children. Outside the church early Wednesday, dozens of people slept on the street.

Title 42 allows the government to expel asylum-seekers of all nationalities, but it's disproportionately affected people from countries whose citizens Mexico has agreed to take: Guatemala, Honduras, El Salvador and, more recently Venezuela, in addition to Mexico.