Severe winter weather is hitting most the nation, and the Hawaiian Islands is no exception, having recently experienced its own cold front, strong winds and heavy rainfall – even hail and snow.

“We had impacts on a number of islands,” Joseph Clark, a forecaster for the National Weather Service, told USA TODAY. Oahu, Maui, Molokai, Lanai and Hawaii Island were hit the hardest while Kauai experienced the least impact, he added. Snow topped Hawaii’s tallest summits.

‘Our deities are alive and well’: Native Hawaiians find a spiritual connection to Mauna Loa eruption

A turbulent flight: 36 people injured amid turbulence on Hawaii flight

Clark said much of the islands received heavy rainfall, even in parts where there’s typically very little rain at all, and strong winds knocking down trees.

Some parts of Hawaii, such as Oahu’s north shore and Lanai City on Lanai, even experienced “small hail,” which is fairly uncommon but can happen with strong thunderstorms, Clark said.

All Hawaii airports are operating as normal; however, there were hundreds of delays this past weekend due to the bad weather. Some passengers said they were stranded at Maui’s Kahului Airport for 20 hours.

National Weather Service meteorologist Scott Rozanski said Tuesday that the weather is typical of the kind of storm Hawaii occasionally gets in December and January. He called these storms “infrequent but not unusual.” 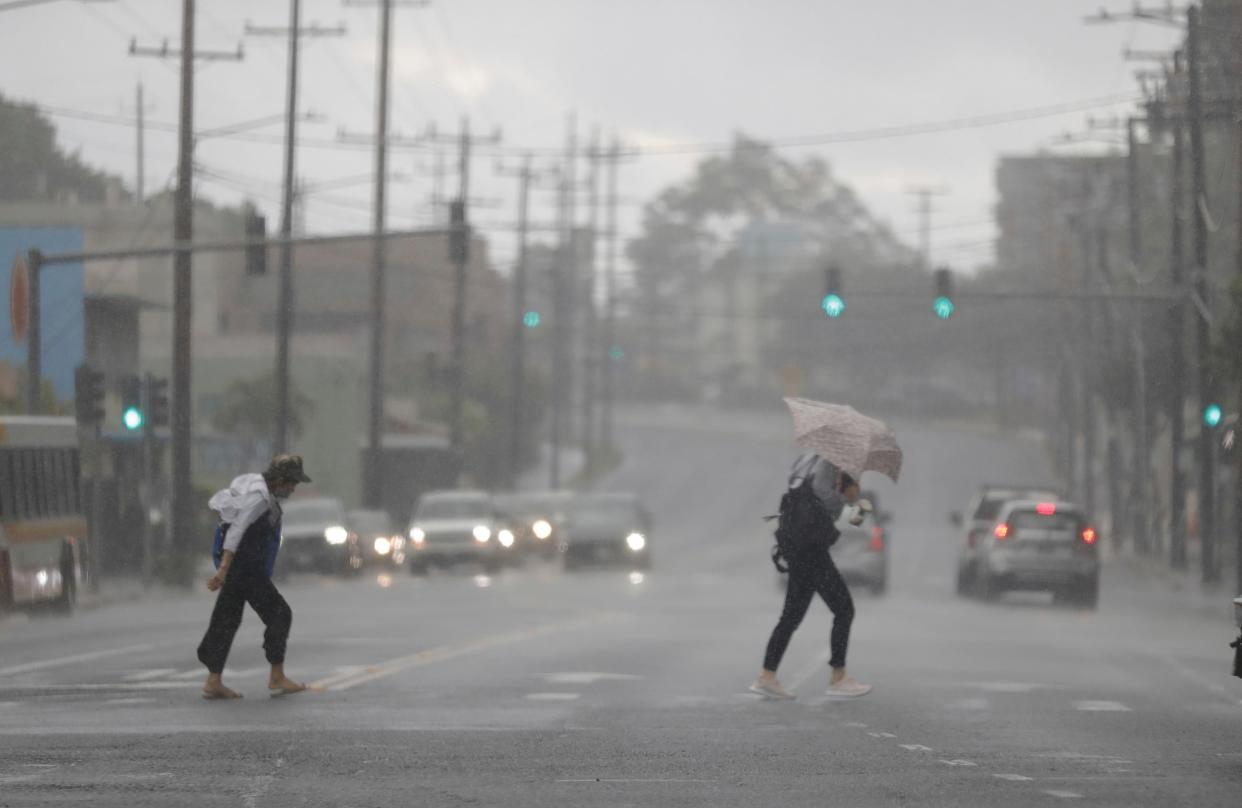 As of Tuesday, the storm has calmed down and people can expect more quiet weather as Christmas approaches in Hawaii. However, there are some closures that may impact people’s plans for the holiday week.

Did the storm cause any damage?

Cleanup efforts are on their way across the islands after the storm knocked down trees into power lines and cars, flipped a small plane that wasn’t in use, uprooted trees and flooded areas.

Since Sunday, thousands of people lost power from the storm on Oahu, Hawaii Island and Maui. As of Wednesday at 11 a.m. local time, power on Maui and Oahu have been restored except for a few pocket outages, according to Teri Theuriet, a spokesperson for Hawaiian Electric.

Those on Hawaii Island may have to wait a bit longer as repairs are needed on two damaged transmission lines, which are being worked on. Over 40,000 customers lost power at some point during the storm on Hawaii Island. As of Wednesday, Theuriet said about 800 are still without power. “Our crews are working as quickly as possible to safely restore power, and we anticipate restoration to be completed by Friday,” Theuriet said.

Talmadge Magno, the director of Hawaii County Civil Defense Agency, said that downed trees and flooding have blocked some roads.

Some Hawaii Island residents in rural areas reported damaged homes while others said they are trapped at home due to storm debris blocking their property.

Is there snow in Hawaii?

Just in time for Christmas, snow can be found on two islands: Hawaii Island and Maui.

Snow fell on Mauna Kea and Mauna Loa, including where a vent was spewing lava only a few weeks ago as Mauna Loa erupted for the first time in 38 years. Winter snow on these mountains is not uncommon at high elevations. Mauna Kea rises to 13,803 feet (4,207 meters), and Mauna Loa is 13,679 feet (4,169 m).

The storm was still battering the Big Island as it moved east on Tuesday. Magno said his agency expects to report the extent of the storm damage to the Hawaii Emergency Management Agency on Friday.

Over on Maui on Tuesday, there were sightings of snow atop the summit of Haleakalā from Sunday or Monday night.

Are there any closures or dangers from the storm?

There are some closures due to the aftermath of the storm but roads and attractions are slowly but surely reopening.

Some parts of Maui are only allowing local traffic as the roads are closed for cleanup, like oart of South Kihei Road, in the popular tourist area of South Maui. Hana Highway, known for its scenic yet dangerous winds, was closed to visitors except for local traffic on Monday. “Boulders, rocks and broken branches are blocking portions of the highway,” a press release for Maui County stated. “Visitors are asked to postpone planned trips to Hana until weather and road conditions have improved. Hana residents are currently without power and dependent upon generators.”

Haleakalā National Park’s Summit District is closed to visitors as park personnel is currently cleaning up the area. All wilderness cabin and tent camping reservations for Wednesday are canceled. However, the park’s Kīpahulu District is open, including its campground and all trails.

As of Wednesday, Hawaii Volcanoes National Park closed Hilina Pali Road “from the gate Kulanaokuaiki Campground to the Hilina Pali Lookout” after a five-acre wildfire caused by lightning from the storm was spotted on Tuesday.

The road to the summit at Mauna Kea also remains closed for snow plowing. The Center for Maunakea Stewardship said the road will likely stay closed for another day or so. 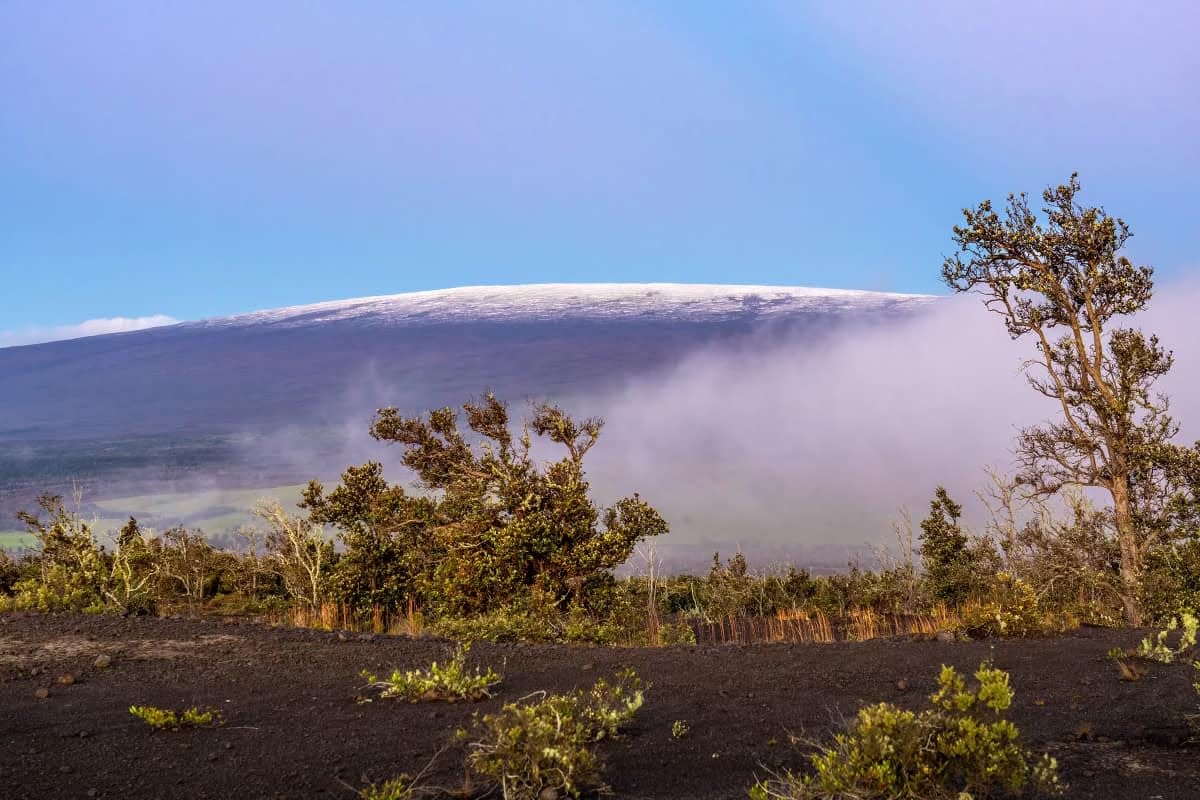 Beachgoers should act with caution as high surf advisories are issued for the islands. North-facing shores can expect up to 25 feet of surf.