NEARLY all of England will be under tougher Covid restrictions from next Wednesday as fresh tier rules come into play.

But fury is mounting over the sleepy towns and villages where rates are still low – but they have been dragged into extra rules as a result of their wider local areas. 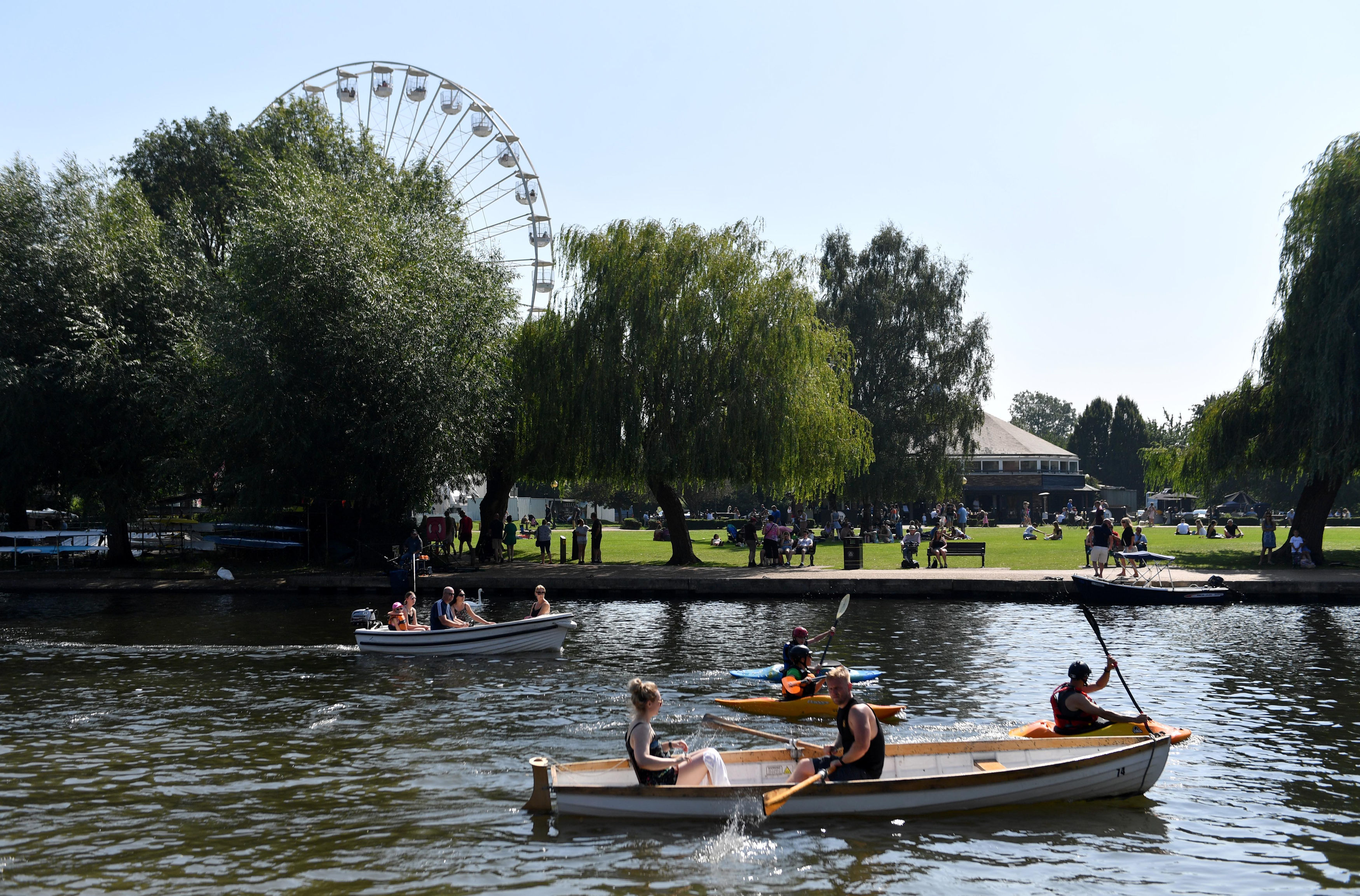 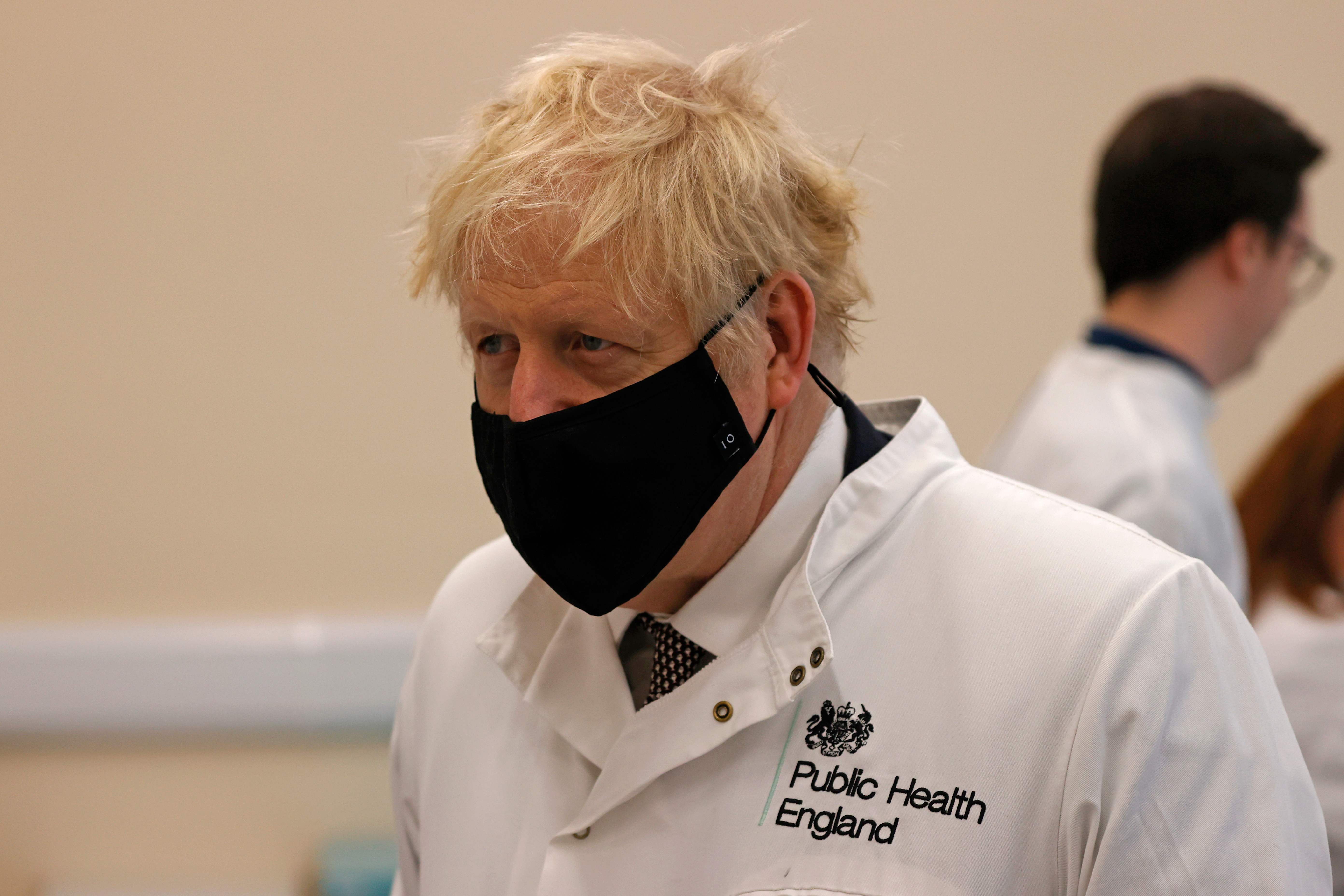 99 per cent of England will be under Tier 2 or 3 next week – banning indoor socialising and slapping extra rules on pubs and restaurants.

Five areas across the nation will jump from Tier 1 straight up to 3 after cases in some parts of their areas shot up.

And residents in hundreds of areas going from Tier 1 to Tier 2 are fuming with the unfairness of the new rules.

Boris Johnson, visiting the Public Health England laboratory at Porton in Wiltshire today, acknowledged the restrictions are "frustrating" – particularly for people in areas of low infection – but said they are necessary to control the disease.

He said: "The difficulty is that if you did it any other way, first of all you'd divide the country up into loads and loads of very complicated sub-divisions – there has got to be some simplicity and clarity in the way we do this. 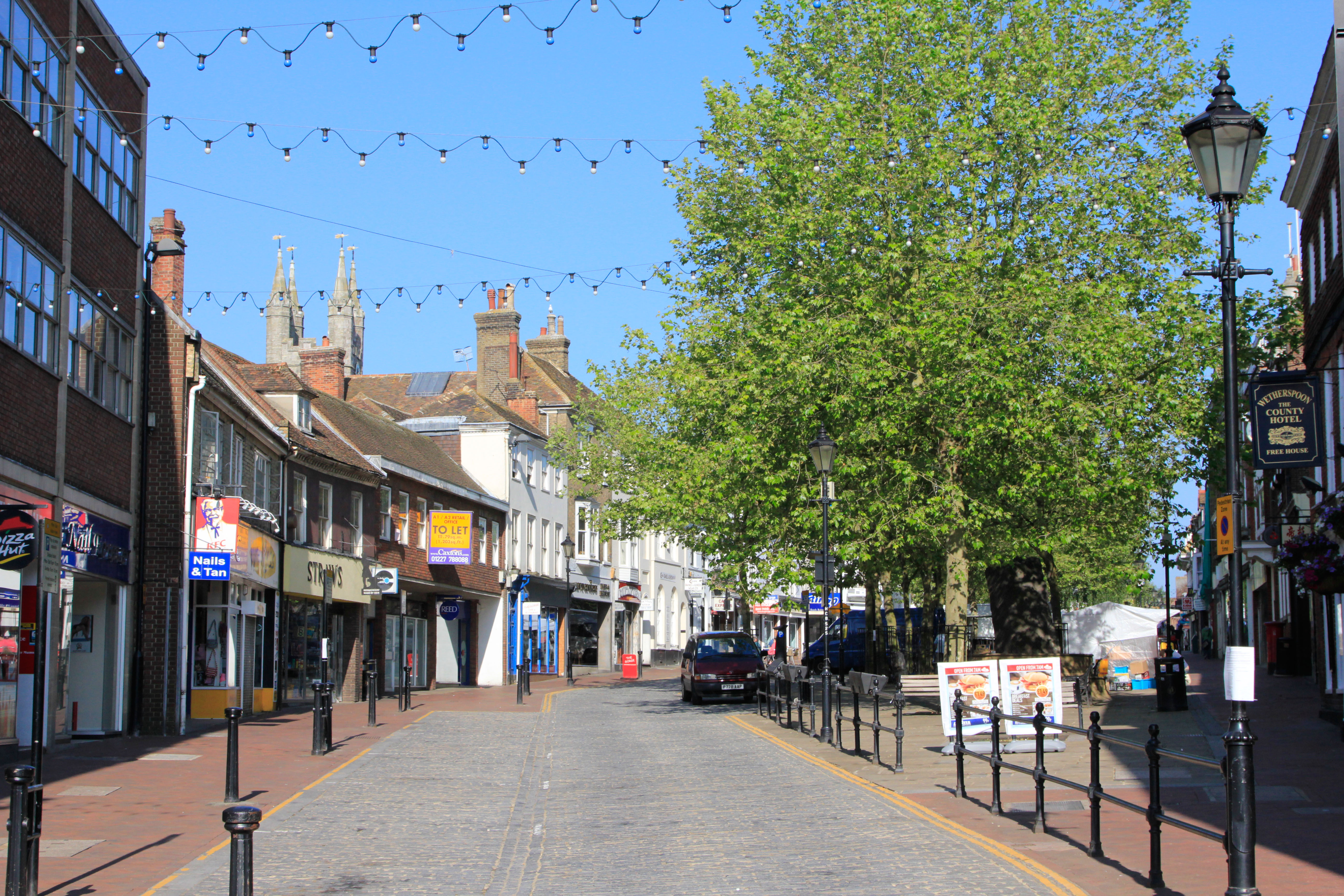 Ashford, Kent, is one of just a handful of areas which has leapt from Tier 1 to Tier 3.

Similarly, another Kent area, Tunbridge Wells, is also in a tricky spot.

It’s had only 140 cases in the last seven days but its pubs will be forced to stay shut next week.

Overall Kent is seeing some of the highest rates in the country.

Swale and Thanet have the two highest rates of Covid-19 infection in England, and Medway has risen to fourth.

Ministers are particularly concerned about the rates of people testing positive in the over 60s.

Kent’s MP, former Cabinet Minister Damian Green said today he needs to be convinced before he can back the new laws in the Commons next week – and mutinous locals will refuse to stick to the new rules as they are so harsh.

He urged the PM to think again and take a more localised approach so low infection areas are not bundled into the same category as Covid hotspots because they are in the same county.

He told The Sun: “In Kent we have a town called Tenterden which has a Covid rate of pretty much zero. There have been weeks when there has been literally nothing there.

"My real fear is that if people think these rules have been applied unfairly in their area then there is a big chance they will start to disobey them."

He added: “There is a lot of anger. My email inbox has not been this full since the Dominic Cummings lockdown row.

"If they can take a localised approach to Slough, why can't they do the same elsewhere?"

Tunbridge Wells’ MP Greg Clark, the former Business Secretary said today he was “very disappointed that Tunbridge Wells has been put into Tier 3, when Covid infections are about half the national average and falling”.

He added: “We need the full analysis to be made public and the decision reviewed. Local MPs have written today to @MattHancock, who has agreed to meet.” 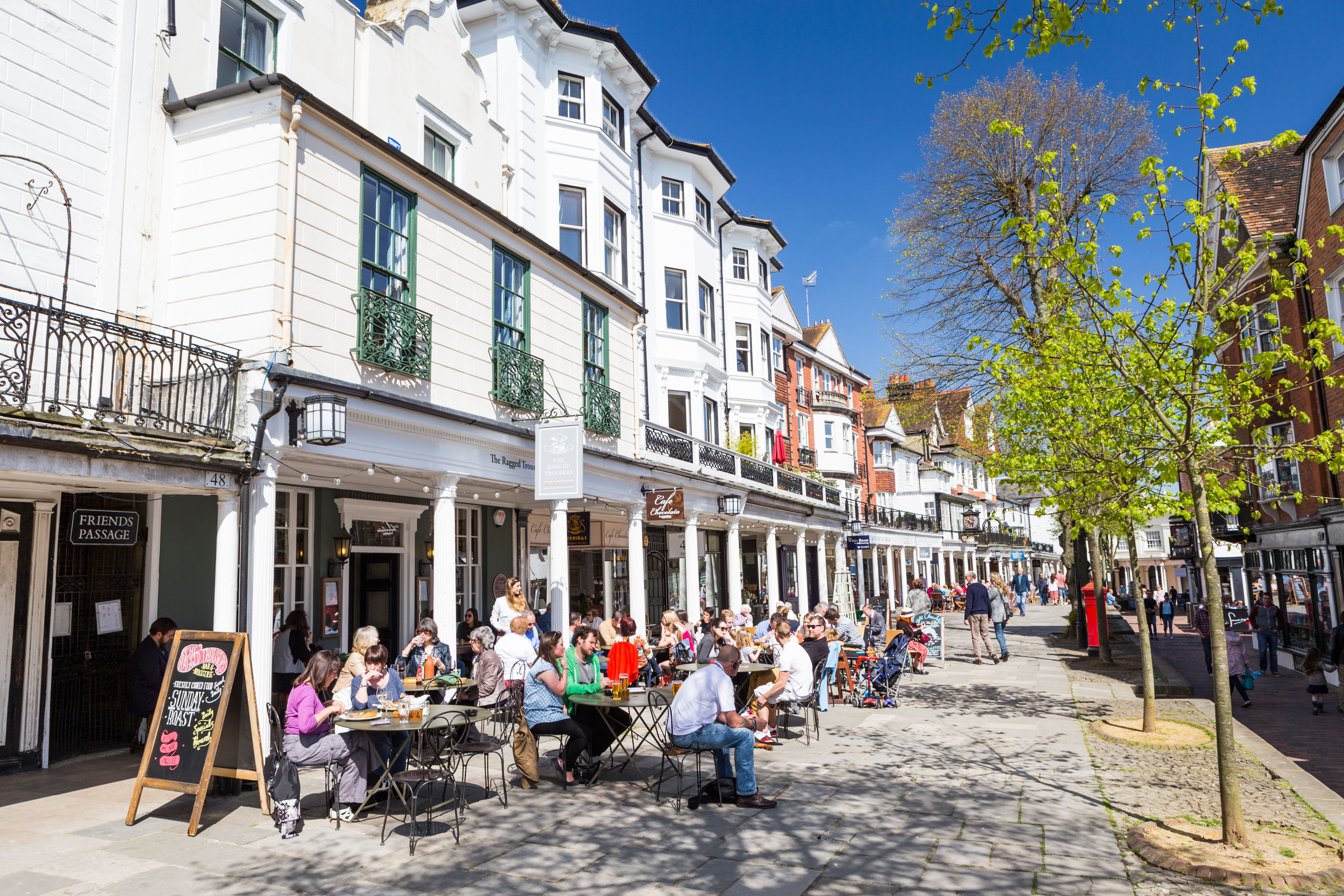 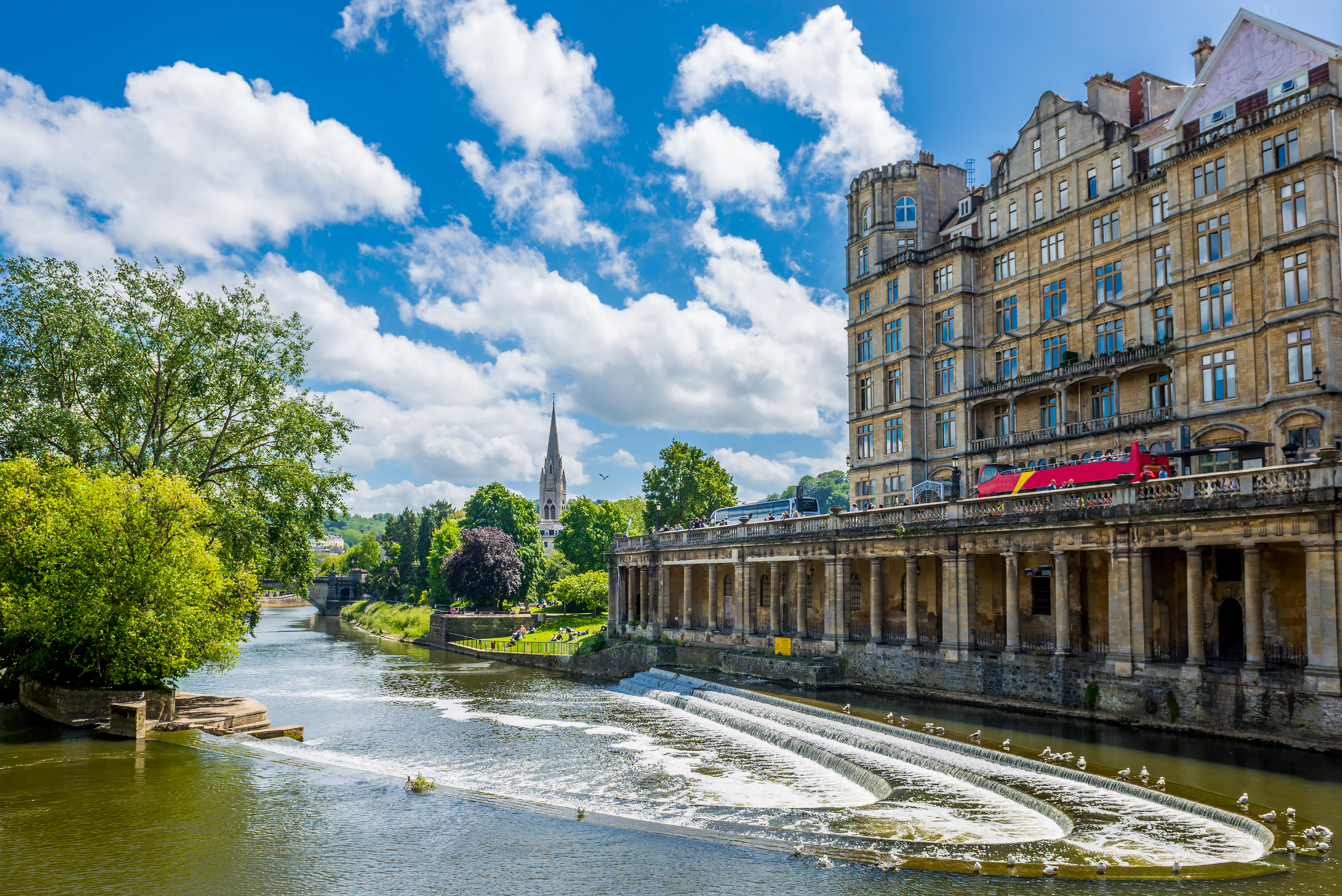 Bath – in North East Somerset – has jumped from Tier 1 to 2.

Nearby areas North East Somerset and Weston Super Mare have also been slapped with new rules from next week.

MPs Liam Fox and Jon Penrose were furious over the move.

In a joint statement they begged ministers to move to a more regional system – pointing out their infection rates have been slashed during the national lockdown.

They said: "This isn't right or fair.

"We hope that at the review point in 14 days time, the methodology can be changed so that North East Somerset can be treated on its own merits."

The seaside resort of West Bay, which provided the dramatic backdrop to TV crime series Broadchurch, is the only place in England where no positive tests have been reported since March.

Yet from next week the fishing village will be plunged into Tier 2 – banning friends and family from seeing each other.

“There is widespread frustration and disappointment that Dorset went into the national lockdown and is coming out with more restrictions at the end.”

Public Health England’s own research on Dorset admits that case rates are falling across the area to the latest of 131/100,000.

But they are still worried about the cases in the over 60s and hospital admissions are rising, so have chosen to put it in Tier 2.

Poole MP Robert Syms said he was likely to vote down the measures.

He blasted: “I have told Health Secretary that both urban and rural Dorset are bitterly disappointed to be in tier 2 .

“I am not happy this could last until next April so I am likely to vote against next Tuesday.”

West Oxfordshire had just 87 recorded cases that will, but the area will face tougher rules.

Now it will be shoved in with no mixing rules round in cities including Liverpool and even London.

Burford Mayor John White said yesterday: “The biggest problem we have had in Burford is the damage this had done to small businesses.” 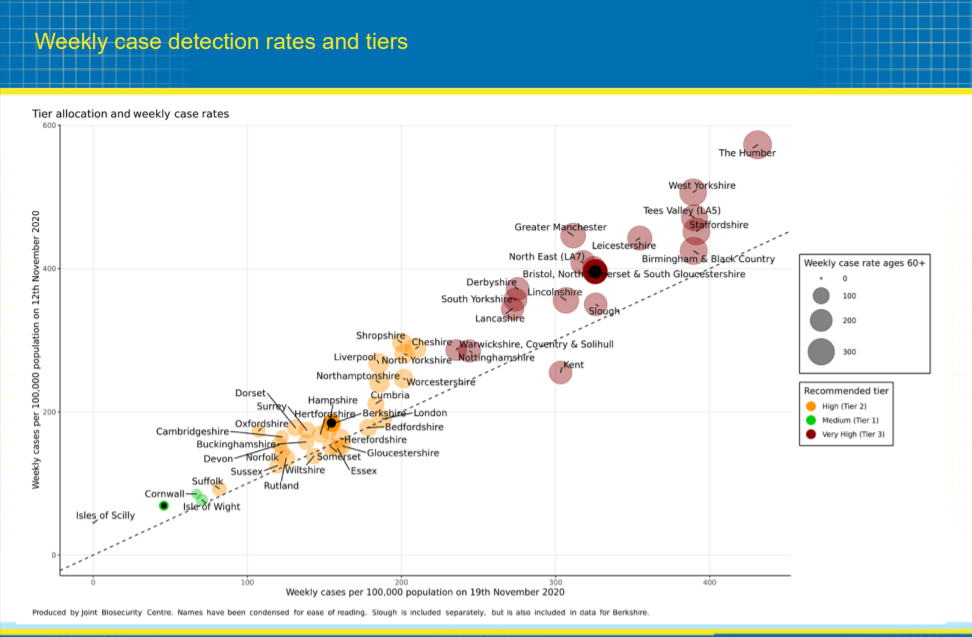 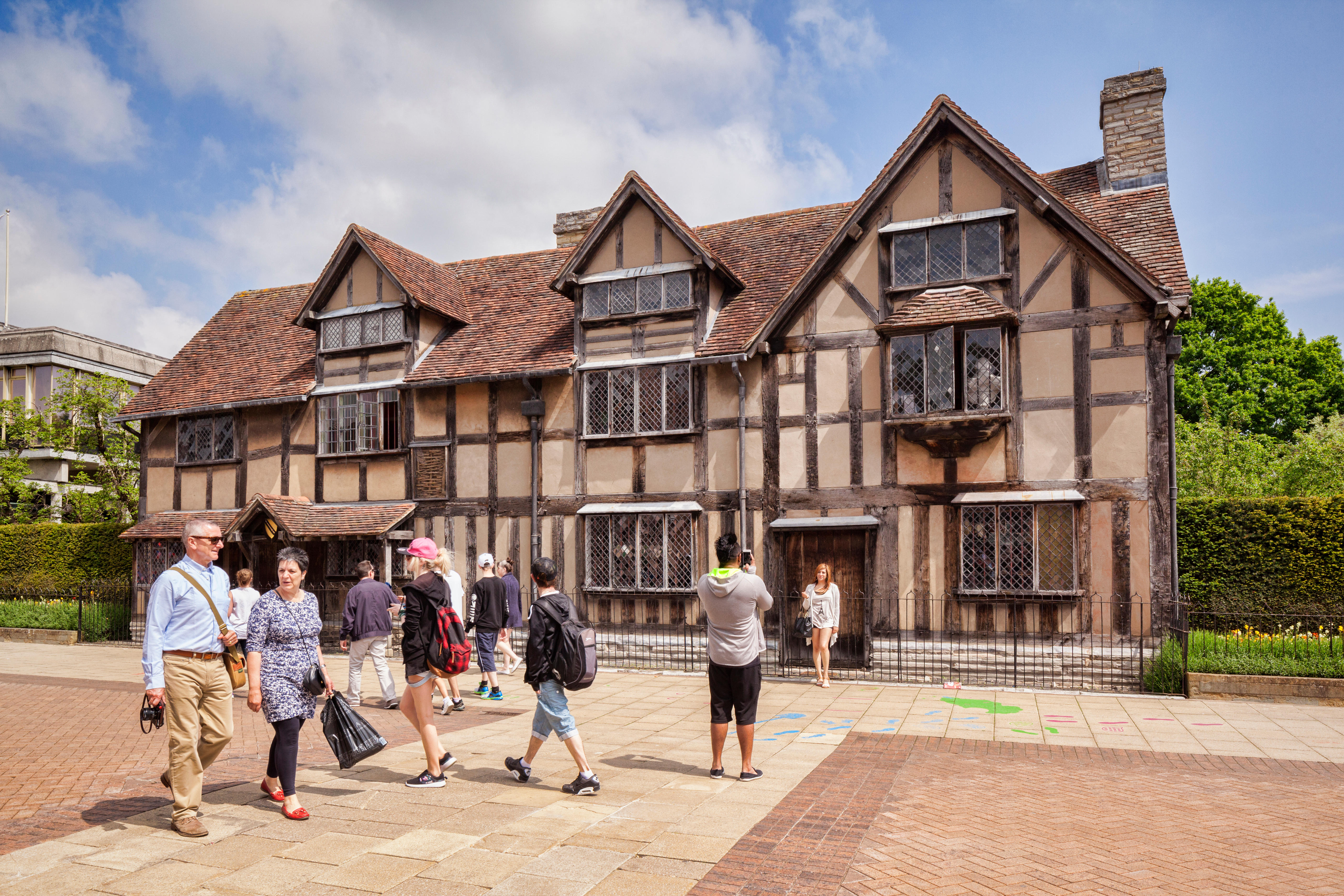 That’s lower than Cornwall and the Isles of Scilly – which has 338 cases in the last seven days, comparatively, and a similar rate per 100,000 – and will be in Tier 1.

The pressure on the local NHS remains high there too.

Business minister Nadhim Zahawi came out to say he was shocked at his area being put into a higher tier – and said he was determined to get it into Tier 2 by the time of the December 16 review.

He said yesterday: “Hugely disappointed that we are in tier3.

“The high numbers of infection (especially over 60) & hospitalisation in North Warwickshire, Solihull is the challenge.

“North & South Warwickshire need to work together to get the infection rates down and go into tier 2 in two weeks time.” 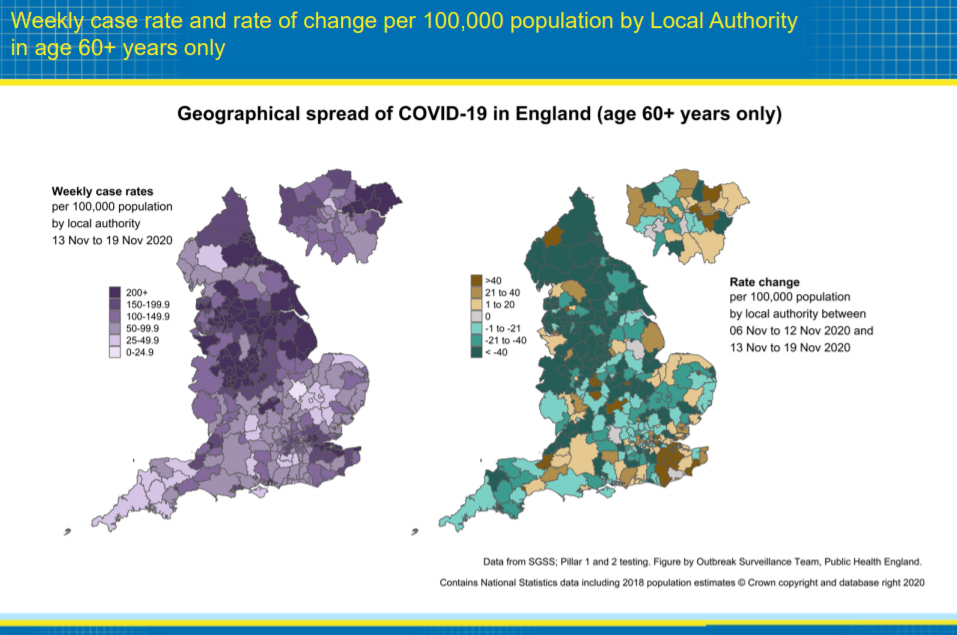 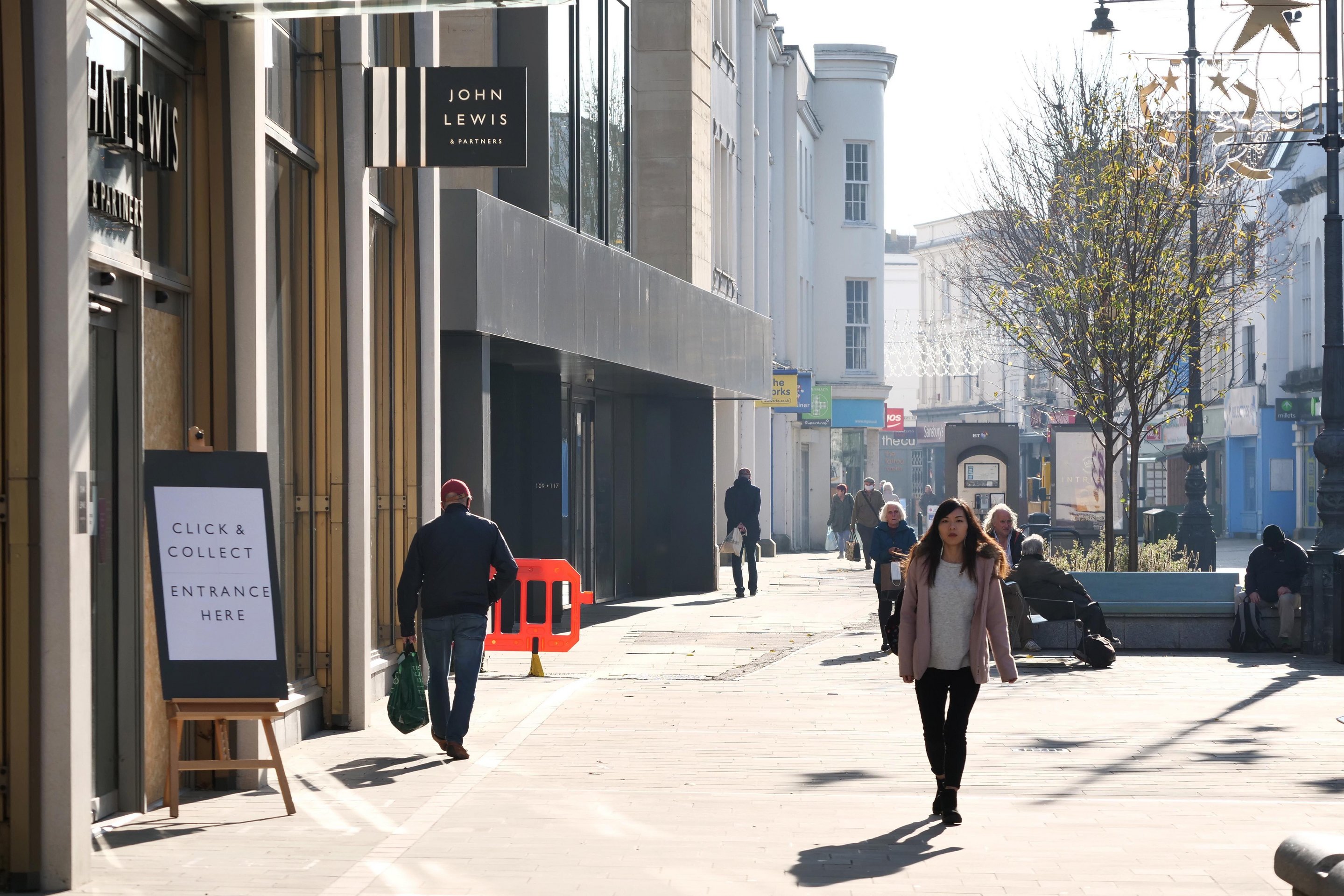 But it will also jump from Tier 1 to Tier 2 next week, infuriating residents who feel they have been obeying the rules.

Residents in areas which haven’t gone down a tier are also infuriated with the way they are worked out.

Despite being a central part of the capital, Kensington and Chelsea has the lowest cases per borough this week of all of London – with 205 cases – down 13% on last week.

Richmond is the second lowest, with 214 cases.

Yet they are in the same Tier next week as Redbridge, which has recorded nearly five times the number of cases – 923 – making its case rate soar above 300 per 100,000.

Ministers have been under fire for treating London – and other major cities including Manchester and Birmingham – as one area after the lockdown is lifted, rather than dividing them up into boroughs.

MP Stephen Hammond said this week: "London is a wonderful, diverse city – it's not just one unit.

"We ought to look at London on a borough-by-borough or sub-regional basis.

"I don't see why Londoners should suffer when the rest of the country is being looked at on a more localised basis." 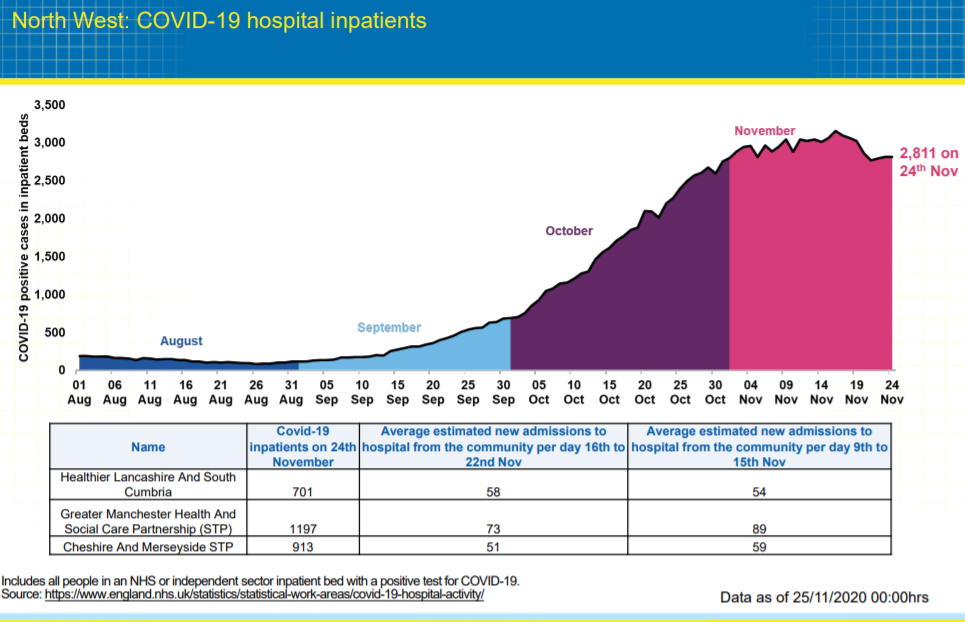 And the situation is similar in Stockport, where the rates of infection have been falling too down to 208.6 per 100,000, but they have been lumped in with the rest of Manchester.

It means their infection rates are below the national average, but the entire city faces Tier 3 for months.

Altrincham and Sale West MP Sir Graham Brady – who represents nearby Trafford – says he will vote against the measures as a result.

Weekly case rates remain very high, especially amongst those aged over 60, at around 260 per 100,000 people, Public Health England claimed. 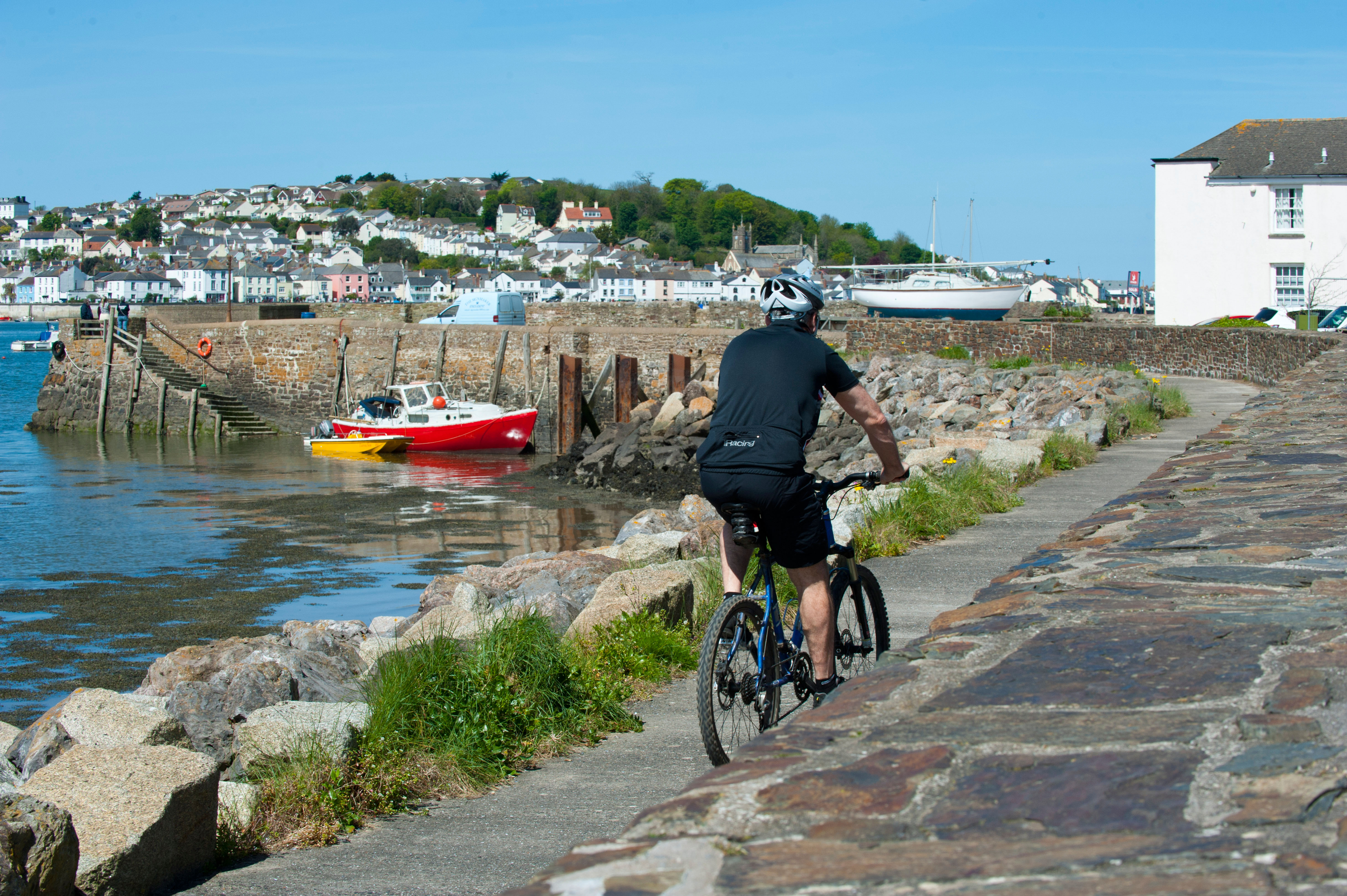