Washington: When snow began falling over Dallas last weekend Emilia Rodriguez Carrasco felt a rush of excitement. This was the first time she and her husband Daniel, who moved from Sydney to Texas in October, had ever seen real snow.

The novelty turned into a nightmare a few hours later when the power went down in the Carrascos’ apartment. They were among four million people in Texas left without electricity after heavy snow and sub-zero temperatures caused the state’s power grid to melt down. 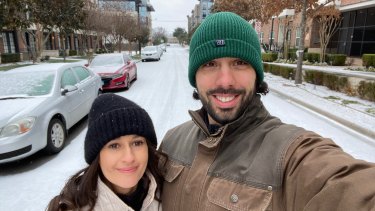 Australian expats Emilia and Daniel Carrasco were excited to see snow for the first time before their power went down.

When they first spoke to The Sydney Morning Herald and The Age, the Carrascos had not had any power, heat or running water for 55 consecutive hours. The temperature in Dallas had dropped as low as -16 degrees Celsius. The one candle they had in the house was quickly burning down.

“We didn’t have the sort of clothes and equipment you need for weather like this,” Emilia said.

“I’ve been sleeping in my gloves and a beanie. We’re doing what we can to get through it.”

To keep warm, Daniel was clad in a thermal top, jacket and coat as well as three pairs of socks.

The worst part, Emilia said, was the lack of water. “If we could just have a warm cup of tea, make some instant noodles or have a shower that would make a big difference,” she said.

At her home in Austin, Sarah Haverin was woken up on Tuesday (AEDT) by the sound of her 18-month-old son crying. The power had gone off a few hours earlier and he was freezing cold. Later that day their water was shut off.

When Haverin, originally from the Mornington Peninsula, spoke to The Herald and The Age she had been trapped inside for six days. The roads near her home were covered in a layer of ice that made it dangerous to drive. 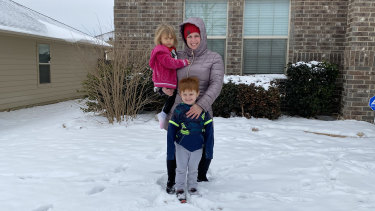 Rebekah Sawyer with children Wyatt and Emma outside their home in Fort Worth, Texas.

“The gas stations all around us are selling out of gas, and that’s if you can even drive there because of the ice,” she said.

“There are cars overturned on the street that haven’t been towed. It’s kind of apocalyptic.”

She took to boiling snow on her stove-top in order to have water to wash her family’s dishes. “We have about six inches of snow in our garden so we thought we may as well use it,” she said.

Luckily, Haverin and her husband had a generator handy which allowed them to heat the house overnight.

“It’s been sitting in the garage taking up space for a year; now we’re so grateful that we have it,” she says. 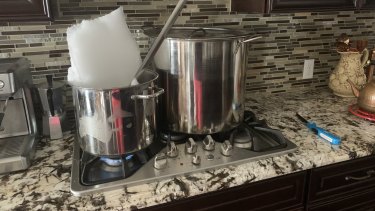 Sarah Haverin has been boiling snow at her home in Austin in order to have water to wash her dishes.

“I’m really concerned for the elderly and those with very young children. The houses here are not built to withstand this weather. I’ve lived in Texas for 11 years and this prolonged period of freezing temps and snow is unheard of here.”

At least 36 deaths have been linked to the winter storms across the US, with most fatalities occurring in Texas. A woman and a child in Houston died from carbon monoxide poisoning after trying to use their car to heat their garage.

Sean Hanrahan, who runs Platypus Brewing in Houston, was forced to close his Australian-themed tap room and restaurant for several days when the power went down. 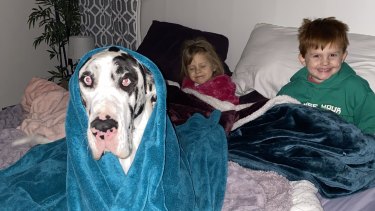 “We’ve had to toss our fresh fruit and veg and I’m concerned about one beer we had in active fermentation,” he said. “We may have to open the tank and pour that down the drain which would be a loss of thousands of dollars. That’s a big ouch.”

Other Australians in Texas reported the pipes in their homes had burst, in one case flooding their kitchen.

Rebekah Sawyer, a single mother who moved from Brisbane to Fort Worth in 2019, said: “It’s been pretty rough keeping a three-year-old and four-year-old entertained with no power, no water, no heat, no yummy food.”

Her mobile phone coverage and Wi-Fi went down, meaning she couldn’t make calls or use the internet.

The water in Sawyer’s home is running again but she is wary of drinking it because of a contamination order.

“Even if you boil the water it’s disgusting,” she said. “It’s so cold that no one’s car is starting; I’m out here trying to jump my car now.”

The upside, she said, was spending time with her children without the distraction of screens for a few days. She also learnt to cook on a grill for the first time.

To Emilia Rodriguez Carrasco’s relief, the power in her Dallas apartment came back to life on Friday (AEDT) after being down for 60 hours.

“I’m never going to take having a hot shower or being able to wash my hair for granted again,” she said.