Al Horford thanked God, because in Game 4 of the Eastern Conference semifinals, he was touched.

Two years after he left the Boston Celtics in free agency, Horford's former team gave him another chance, reacquiring a contract the Philadelphia 76ers and Oklahoma City Thunder had written off in the meantime. The 15-year veteran paid off every cent with a playoff career-high 30 points that saved the Celtics' season and gave him one more title shot with a team he led to back-to-back conference finals an NBA lifetime ago.

Facing the possibility of a 3-1 series deficit against the best player alive and his defending champions, Horford scored 16 points on 6-of-6 shooting in a stunning fourth-quarter comeback that brought Boston's second-round slugfest with two-time MVP Giannis Antetokounmpo and his Milwaukee Bucks to a 2-2 series draw.

Another playoff shortcoming in a career full of them stared Horford in the face. A minute into the third quarter, Antetokounmpo dunked on Horford and glared into his eyes, earning a technical foul for taunting. Horford had drawn the league's toughest defensive assignment once Robert Williams III was a late injury scratch and Grant Williams got himself into foul trouble, and Antetokounmpo was abusing the old man.

Horford merely nodded his head in response and said aloud, "OK," as if he were marking the moment.

GIANNIS WILL NOT BE DENIED 😱

"I don't know what he said to me, but the way he was looking at me and the way he was going about it really didn't sit well with me," Horford told reporters, "and at that point something switched with me."

Milwaukee's lead swelled to 76-65 with 15:13 remaining on Antetokounmpo's 13th point of the third quarter. Antetokounmpo had 28 points and 16 rebounds to Horford's 14 and five at that point. The season was slipping away. So, too, might have been Horford's last best chance at a ring. The final year of the $109 million deal he signed in 2019 is not fully guaranteed next season, nor is Boston's pathway to the Finals.

So, a month from his 36th birthday, Horford went to work in the fourth quarter opposite the most dominant force since Shaquille O'Neal and punched out with a 116-108 win. At the 10-minute mark, he drove around Antetokounmpo, dunked over him and flexed, inadvertently elbowing the Bucks superstar and earning his own technical foul. The payback tied the game for the first time since the final minute of the second quarter.

"A lot of people at 35 cannot even play that way," Antetokounmpo, 27, said of Horford in his postgame news conference. "Hopefully, we can be blessed when we are in his position, and when we get old we're still in the league and we can still compete at the highest level. That's the goal. He's playing amazing, and he's the reason they were still in the game. You've always got to give credit where credit is due."

Horford was not done doling out punishment. His 3-pointer with eight minutes left gave Boston its first lead of the second half, 88-85. Milwaukee would not submit, retaking the lead, so Horford found Jayson Tatum for a layup and a tie midway through the fourth. Horford drilled another 3 for a lead on the next possession. His and-one another 30 seconds later gave the Celtics a two-possession lead they would not relinquish.

"I remember coming in my rookie year and seeing Al Horford," said Tatum, the 24-year-old rising star who scored 30 points of his own. "I've been seeing him play my whole life. … He's helped me a great deal in the three years that we've played together, and I'm very lucky and fortunate to be able to call Al a teammate."

Horford lay on the court after withstanding that last hit and watched the ball find the net for his only 30-point game in four seasons on the Celtics. Tatum tapped his chest, as if to resuscitate Horford, who has been given another basketball life. He is two wins from beating the team that ended his last tour of duty in green and 10 from NBA immortality, because a championship would secure his spot in the Hall of Fame.

"I'm just really grateful for this opportunity that I have," said the five-time All-Star. "… That's from sitting at home [last year]. That's from watching the playoffs. That's from not knowing what my future was holding."

The Bucks are hell to play, but Al Horford can see the light. 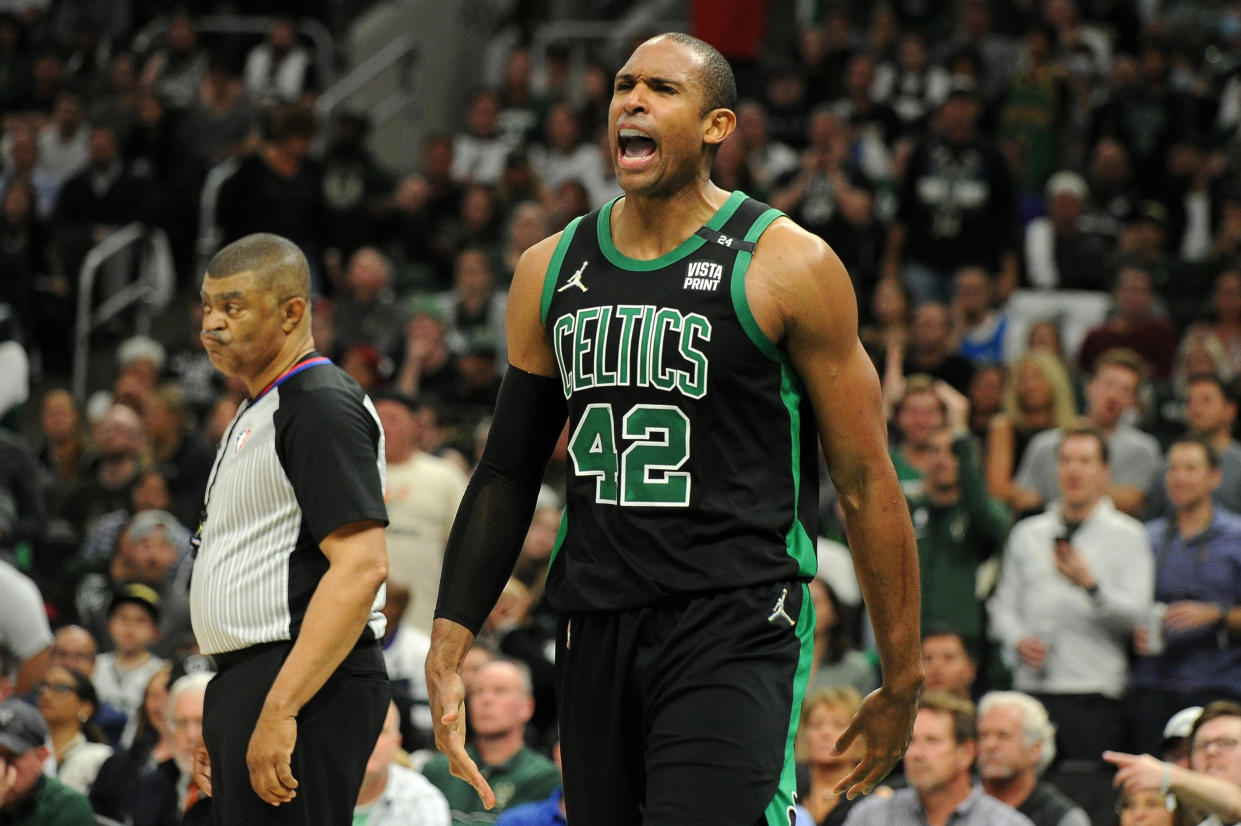