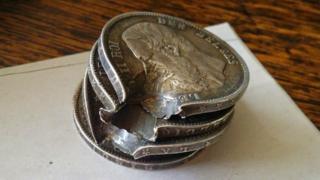 These coins both endangered and saved the life of a soldier in World War One.

Shot after the noise of them “clinging together in his breast pocket… gave his position away… the bullet that should have killed him ricocheted off of the coins thus saving his life”.

Optatius Buyssens’s great-grandson Vincent posted a photo of the coins on Reddit and it received more than 130,000 upvotes in 24 hours.

The digital strategist, 28, of Antwerp, has never had such a popular post.

“He got kicked in the head by the German soldier who shot him but tricked the soldier into thinking he was dead,” Vincent adds.

“When the German soldier left, he and another wounded comrade managed to crawl to safety.”

Optatius had a medical condition that initially barred him from joining the Belgian army.

But he eventually managed to volunteer and was shot, according to Vincent’s dad and Optatius’s grandson, Phillippe, on 26 September 1914, in the Belgian town of Lebbeke.

“Three of the coins are from Belgium and three are from France,” Phillippe adds.

After the War, Optatius had heart problems but he lived until 1958.