Protesters calling for the monarchy to be abolished smeared the Australian flag with fake blood as they paraded through central Melbourne on a public holiday to mourn the Queen.

The protesters had marched from a “healing” event on Thursday at Birrarung Marr carrying signs reading “land rights, not royal rights” and chanting “abolish the monarchy – down with the king”. 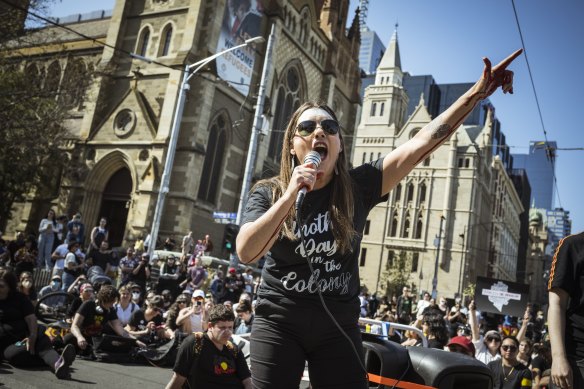 At the intersection of Flinders and Swanston streets, Greens Senator Lidia Thorpe, her hands covered in fake blood to highlight the impact of colonisation, addressed a seated crowd of about 500 people.

“The Crown’s boot is on our neck and we’re sick of it,” Thorpe said. “You want to mourn the coloniser who brought the pain and the genocide and the murders here to our people. Shame.

“While everyone mourns the Queen, we have 10-year-old babies trying to take their lives in Don Dale prison.”

On the route from Birrarung Marr, protesters had paused at the British Consulate on Collins Street, where some smeared fake blood on a metal coat of arms fixed to the wall of the building. 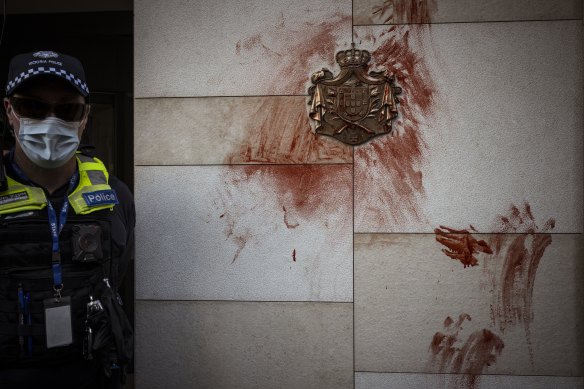 Handprints in fake blood on a coat of arms outside the British Consulate in Melbourne.Credit:Chris Hopkins

That did not appear to be the British symbol and was more probably associated with the Cartier store that occupies the building’s ground floor.

They also stopped at Parliament House to repeat chants for Australia to sever ties with the monarchy and return Aboriginal land.

Maylene Slater-Burns, a Kamilaroi woman among the protesters, said the public grief acknowledged over the monarch’s death flew in the face of Aboriginal people calling for a day of mourning for decades.

“There should be a day of mourning to acknowledge our people, our suffering; our continued loss of culture and kin,” said Slater-Burns, who wore a possum skin as a symbol of mourning over her right shoulder. 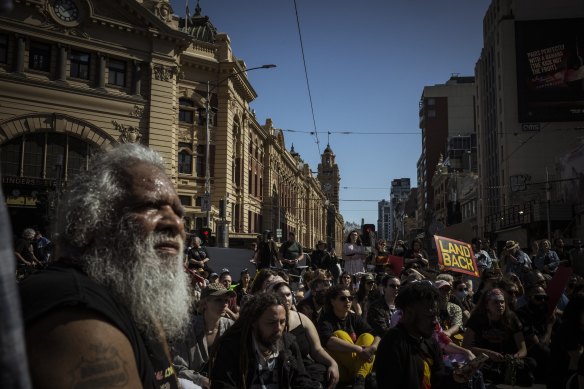 Uncle Charlie and around 500 supporters of Indigenous rights, rejecting a public holiday mourning the death of Queen Elizabeth II.Credit:Chris Hopkin

She pointed to Premier Daniel Andrews’ election commitment this week to replace the Aboriginal name of a rebuilt Maroondah Hospital with a tribute to the Queen as “a step backwards” and a “painful message” to First Nations people.

“Dan Andrews … needs to have a really hard think about the decisions that he’s making and whether it’s in the best interests of First Nations people. And is he really an ally in our fight for recognition?” Slater-Burns said.

Aboriginal rights activist Gary Murray, who addressed the crowd, said he considered himself “caught in a bind” on Australia rejecting its ties to the monarchy.

His grandfather-figure Sir Douglas Nicholas was the first Aboriginal person to be knighted in Australia – a title Murray said he did not believe in but brought Nicholas “extra weapons” to negotiate with.

Murray told The Age that advocates needed to continue to fight for Aboriginal self-determination and sovereignty.

“[The monarchy] doesn’t fit into that,” he said. “We have to sort our own political systems out as First Nations.”

Activist and academic Gary Foley, who addressed the crowd twice, said that Australia needed to acknowledge its history of colonisation. But he saw no hope of Australia becoming a republic before a referendum is held on an Indigenous Voice to parliament.

“Progress will never be made until Australians come to terms and understand their own history and face up. That’s not going to happen in my lifetime,” he said.

Larissa Jane Ryan, a 31-year-old Wamba Wamba and Dhudhuroa woman, lost her parents and sister all before she turned 30 and links their deaths with the impact of colonisation.

“This process has been really sad to see,” she said. “Everyone’s just jumped on the wagon of Queen Elizabeth dying, instead of stopping to think about the impacts of the history of this country.”