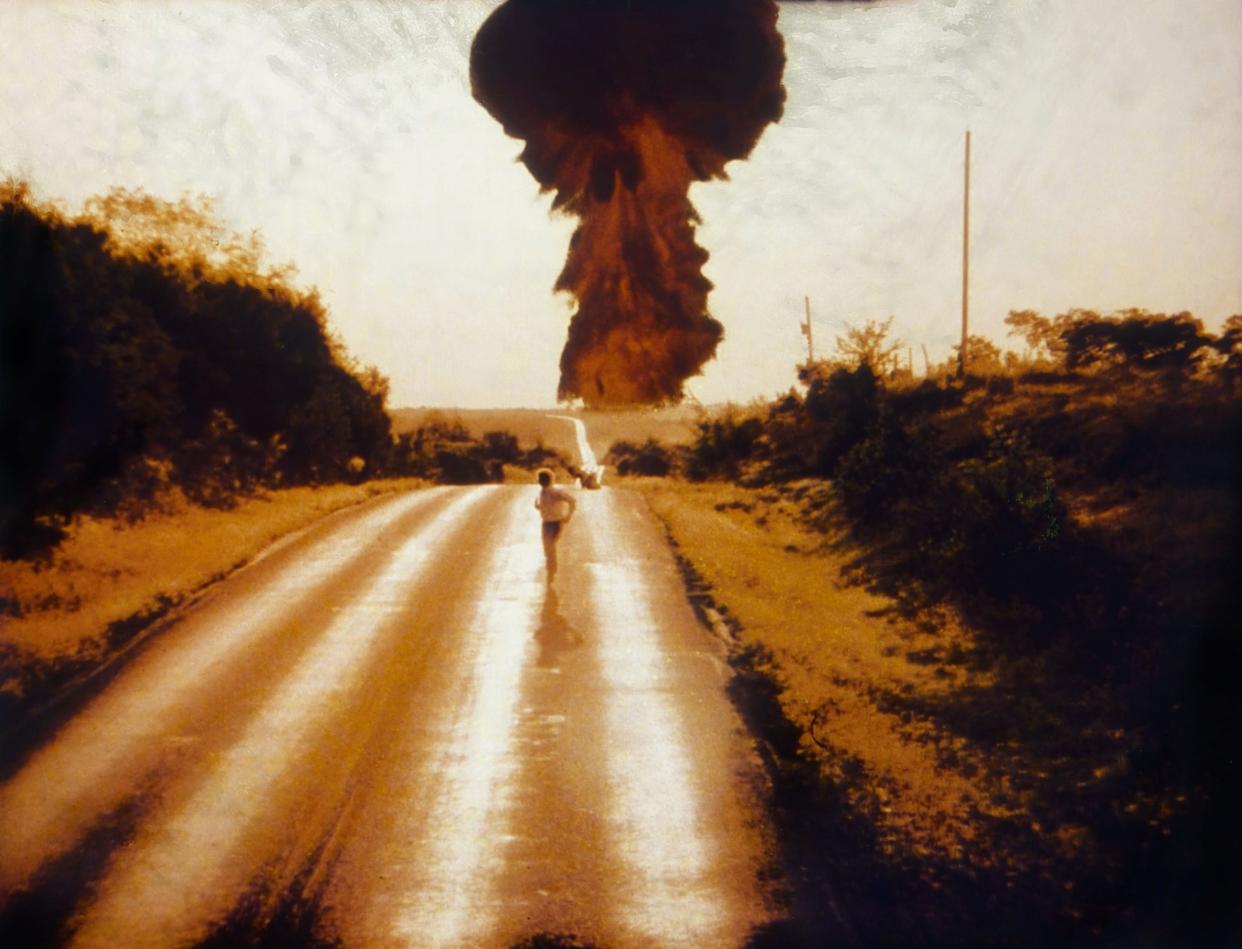 When Hollywood has imagined the end of the world in recent years, climate change, viruses and zombies have generally been the culprits. But Russia's invasion of Ukraine in February has reignited Cold War fears of a nuclear apocalypse, directing the spotlight back onto post-fallout fare like 1959's On the Beach and 1983's The Day After. And the latter film's director, Nicholas Meyer, tells Yahoo Entertainment that he's among those who fear that we're now closer to the precipice of a nuclear exchange than we've been in some time.

"These are very scary times," Meyer says on the phone from his home in California. "Looking at who's in charge now in Russia, Vladimir Putin's a very different-minded leader than Mikhail Gorbachev back in the day. And we've got a lot of young men with huge responsibilities on battlefields where the slightest miscalculation could lead to widespread devastation beyond what is only Ukraine. Things didn't get better after 1983."

Premiering on ABC on Nov. 20 of that year, The Day After depicts an escalating conflict between the Soviet Union and the U.S. that crosses the point of no return when both countries fire nuclear missiles at each other. The film's nightmare-inducing centerpiece sequence depicts American cities and landscapes being leveled by the ensuing blasts, and includes actual footage of nuclear bomb tests conducted in the Nevada desert. The last hour of the film depicts the survivors — played by a cast that included Jason Robards, Steve Guttenberg and JoBeth Williams — struggling to rebuild society amidst the ruins of a vanished world.

As devastating as The Day After is, Meyer says that it's actually an optimistic depiction of the kind of nuclear holocaust that's top of mind again now. "That was nuclear war on a good day as opposed to what the reality is likely to be. The very fact that [Putin] is threatening to use nuclear weapons that are characterized as 'small' — whatever the hell that's supposed to mean — is, at best, cold comfort."

Meyer was born in New York City on December 24, 1945 — four months after the U.S. detonated nuclear weapons over Hiroshima and Nagasaki, effectively ending World War II — and grew up in the shadow of the bomb. "I remember being a kid and having to wear dog tags and ducking under desks," he says now. "I also remember worrying every time that a low-flying plane went over Manhattan. I would think: 'Is this the one carrying the bomb?' I guess I was an imaginative child!"

As an adult, Meyer put that imagination to work as an author and filmmaker, penning bestsellers like The Seven-Per-Cent Solution and helming blockbusters like Star Trek II: The Wrath of Khan. The success of that 1982 film brought him to the attention of The Day After team at ABC, although he resisted the job opportunity at first suspecting that the network would get cold feet… which they did.

"The network was against this movie being made," he recalls. "Everyone believed that no sponsors would come near it, and they were right. It was largely done commercial-free." In fact, ABC's wariness of The Day After continues today. While the film has been released on DVD and Blu-ray, it's not currently available to stream on Hulu, which is owned by the network's parent company, Walt Disney. "They haven't talked to me about it," Meyer says, adding that he'd like to see The Day After on a major streaming platform. 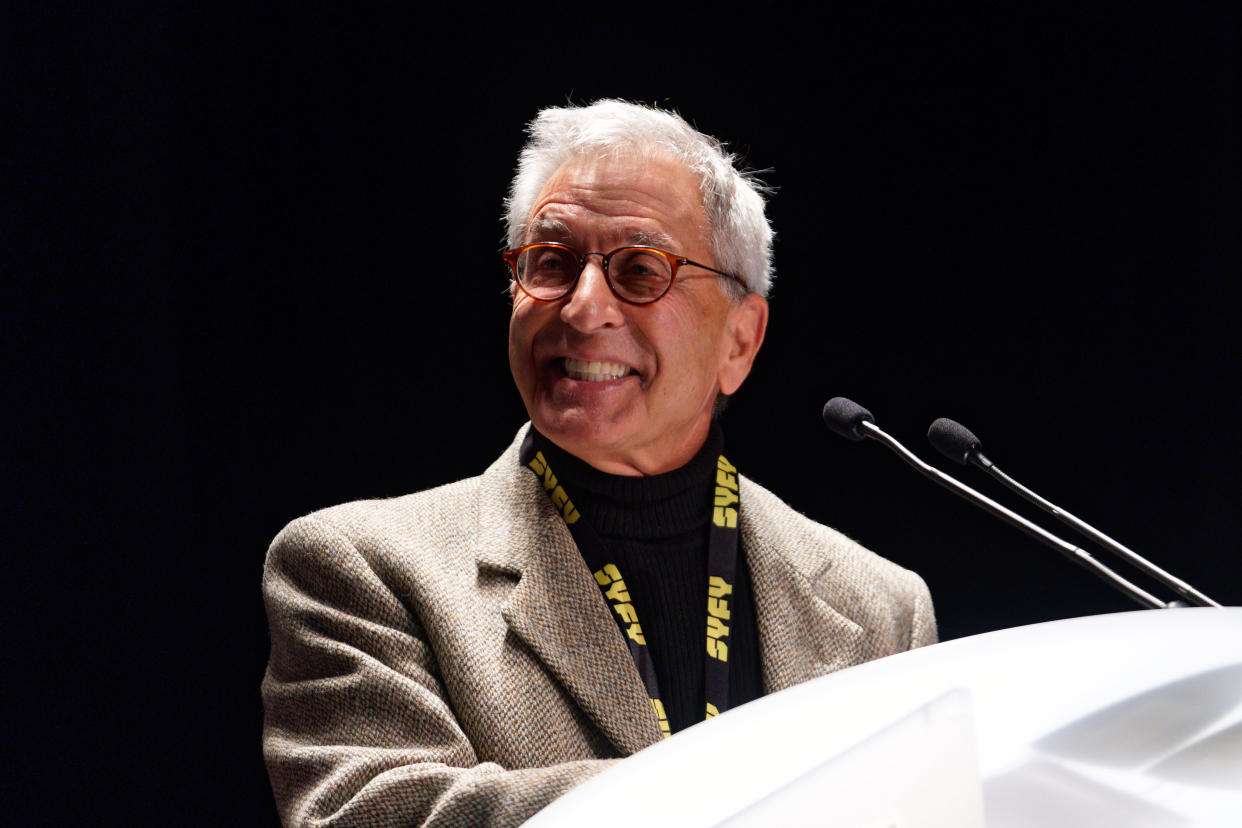 It's worth noting that ABC's prediction that nobody would tune in turned out to be wildly off-base. An estimated 100 million people watched The Day After when it premiered, and some of them were as young as Meyer was when he ducked-and-covered in school. At the time, experts advised against parents letting their children watch the film, and Meyer is equally unsettled by the knowledge that millions of kids were part of that initial audience.

"If I had had my kids at the time, I would not have shown them the movie — certainly not if they were younger than 14," he says. "And yet evidently people did let kids watch it and many were infinitely distressed by what they encountered. I didn't want them to experience it: I didn't see the benefits of that."

While the children who watched The Day After live were understandably horrified, their nightmares could have been much worse had ABC aired some of the more graphic material that Meyer filmed for his planned three-hour cut. Those excised scenes include more footage of the radiation-ravaged victims and post-blast violence. "I remember a scene of a girl screaming in a hospital bed that featured a close-up shot of a cockroach — the idea being that the only thing that was going to survive the radiation was cockroaches," Meyer says. "It wasn't X-rated graphic, it was just hitting nails devastatingly on the head and was deemed to be too much." 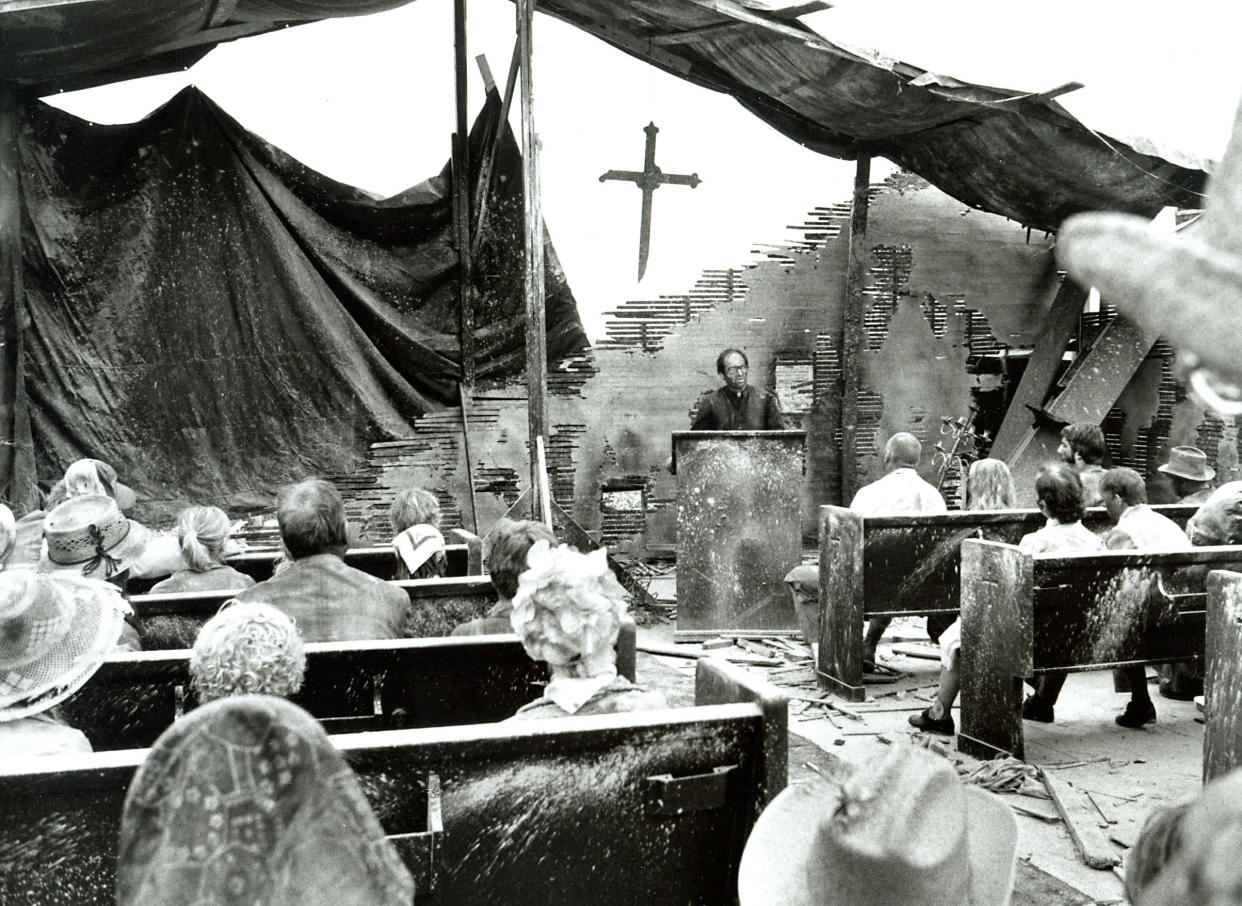 Besides children, the audience that was perhaps most profoundly affected by The Day After were government officials, including President Ronald Reagan. Having entered the Oval Office as a staunch opponent of nuclear arms control, the former actor underwent a profound transformation on the issue during his two-term administration, ultimately forging an alliance with Gorbachev that resulted in the signing of a landmark 1987 disarmament treaty. As Meyer eventually came to learn, The Day After helped instigate that policy reversal, although — contrary to rumor — he never heard from Reagan directly.

"There are a number of sources about what happened after he saw the movie," he says, pointing to Reagan's own diaries, as well as the observations of his official biographer, Edmund Morris. "[Morris] said the only time he ever saw Ronald Reagan flip out was after screening The Day After."

In his 2009 memoir, The View From the Bridge, Meyer recalled being accused by Reagan's more conservative supporters of spreading Soviet propaganda. But the director reiterates that he never set out to criticize the president directly. "It's not my recollection that we were ever trying to get Reagan," he says, fact-checking the rumor that the president heard in the film is supposed to be a Reagan stand-in. "That was never our intention: We just wanted a presidential voice."

"Remember, The Day After is not a movie about the military, politics or policy," Meyer continues. "It's about us doing what we do. It may have had a propagandistic effect, but it was not made as propaganda. It just said, 'What would happen and what would it be like?' People have trouble visualizing that, and the movie visualized it for them. That's why people like Reagan were so affected." 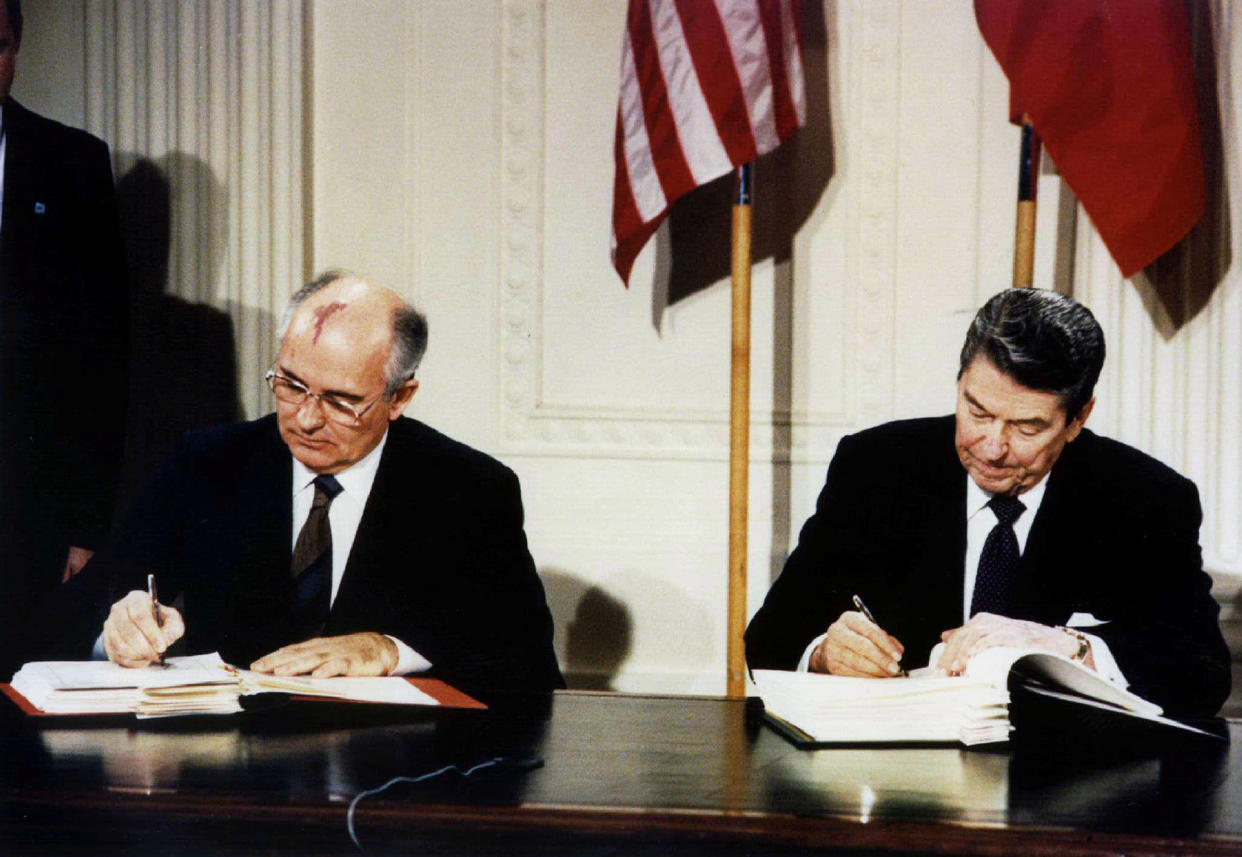 Successive administrations, however, seem less concerned by the implications of nuclear war. In 2018, former president Donald Trump withdrew from that 1987 treaty and Putin followed suit, stoking fears of a renewed arms race. Meyer also suspects that "close calls" with nuclear blasts — think of the famous 1980 socket wrench incident in Arkansas — are being increasingly hushed up by those in power.

"Whether there were close calls or not in the Trump administration, we got by by the skin of our teeth," he says. "Meanwhile [he] rearranged the world, legitimized fascism and did a whole bunch of other things. Will we ever recover from that? I don't know. Right now this country is totally split."

Even the current Oval Office occupant isn't immune from missteps. In March, President Joe Biden departed from his prepared remarks and said that Putin "cannot remain in power" — leading some to speculate whether he was calling for regime change. (He later walked those statements back, saying it was a "personal feeling" and not a policy shift.) Meyer says he's willing to give Biden the benefit of the doubt.

"I'm an admirer of his, but I think he sometimes puts his foot in his mouth. I don't think it's anything compared to Donald Trump! It's a walking gaffe every time he opens his mouth. But Biden is certainly guilty of gaffes, and I think he shouldn't have opened his mouth [to say] 'this guy has got to go' because it was bound to be interpreted by some eager beavers who were fans or detractors as a statement of policy. It was just an ill-advised remark." 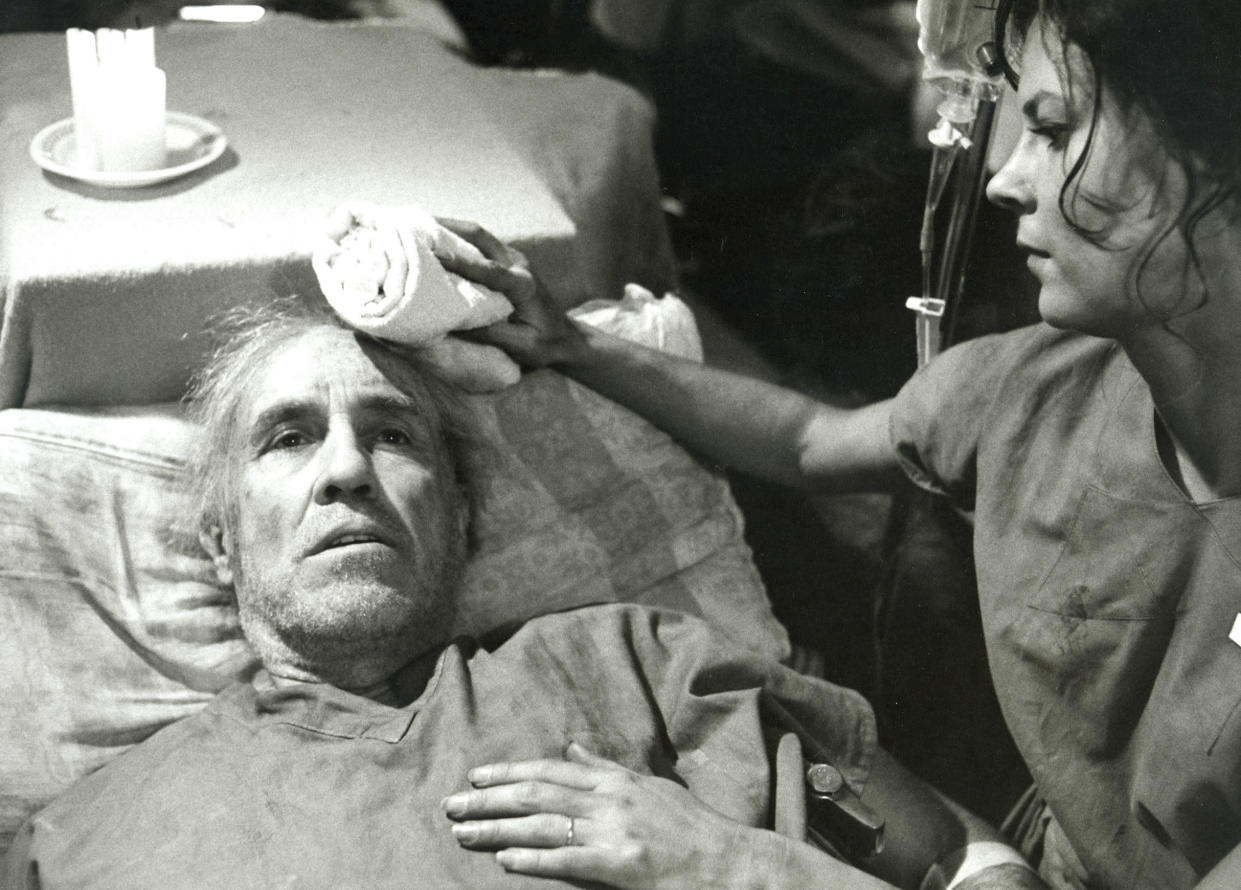 The Day After ends on an ambiguous note that doesn't tip its hand one way or the other about the prospects of humanity's long-term survival. Meyer declines to share his own feelings about the endgame of that specific post-nuclear scenario. "The movie is the movie: It's got to be what people take away from it." But looking at today's headlines, he sees some of the same willful denial amongst society at large that's depicted in the film before the nukes start flying.

"The news that is too unpalatable, most of us refuse to process at all. For example, nobody wants to deal with the reality of climate change, so it's very easy for people to fall into the arms of those who tell you that it's all a hoax. And up until the invasion actually began, the citizens of Ukraine didn't think it was gong to happen, whereas a lot of other people, including me, thought, 'Well yeah, [Putin's] going to do this.' The only thing that's different now is that things happen so fast, and then we're onto the next thing. Will Smith slapping Chris Rock is front and center now, but it'll burn off and we'll be onto the next thing."

Having taken the rising temperature of the times, Meyer says that he and his producing partner, Frank Spotnitz, are pitching a "global version" of The Day After to streaming services in the hopes of expanding on the impact of the 1983 film. So far, though, the duo have struggled to find any takers.

"I guess streamers are worried that the controversy surrounding a proposal to do something like this will alienate, if not sponsors, then certainly subscribers, but I don't know if that really holds," he notes. "The people who thought that nobody was going to watch The Day After turned out to be wildly wrong. I still get letters and e-mails about that movie every day."

The Day After isn't currently available to stream, but can be purchased on Blu-ray and DVD.