Markets have stabilized following Russia's Feb. 24 invasion of Ukraine, as if the bombs and missiles won't derail the global economy. But the economic war running parallel to the shooting war is getting hotter, warranting more attention than investors may be devoting.

Much of the analysis of Russia’s war in Ukraine focuses on brutal land battles for terrain as invading and defending forces fight village-by-village in eastern and southern Ukraine. But just as important are multinational efforts to choke the Russian economy, by slashing the energy revenue that funds Russia’s military and denying foreign technology Russia needs to maintain and replenish its weaponry. Like tank and artillery battles, the economic combat is attrition warfare in which whoever lasts longest is likely to win.

The economic war is intensifying as the improbable starts to seem possible: Ukraine could win. The usually taciturn U.S. Defense Secretary, Lloyd Austin, has started to talk about the U.S. and NATO deliberately weakening Russia, en route to a Ukrainian victory. Heavy weapons, such as tanks and artillery, that Western nations were reluctant to give Ukraine at the start of the war are now flowing more freely.

In response, Russia has now stopped supplying natural gas to Poland and Bulgaria, its strongest move yet to punish nations aiding Ukraine and a signal that Russia could tighten the taps or shut them completely if it feels increasingly threatened. “All three parties to the conflict, NATO, Russia and Ukraine, are escalating,” the Eurasia Group warned in an April 27 analysis. ”Further escalation becomes more likely as animosity builds.”

Poland and Bulgaria can probably get by without Russian gas. But Russia and its energy customers are now beginning to “weaponize” oil and gas shipments, which is one of the more alarming scenarios analysts drew at the outset of the war. If Russia halts gas shipments to other European nations or the entire continent, it would cause skyrocketing prices in Europe and probably cause a recession there, which could undermine support for aid to Ukraine by raising the cost on millions of European voters.

At the same time, European nations are considering a phased boycott of Russian oil, which they can replace from other sources more easily than Russian gas. Even so, a broader embargo of Russian oil would raise global prices for everybody and add to inflation in Europe, the United States and elsewhere. Tightening the screws on Russia’s economy generates collateral damage in many other countries.

Sanctions on Russia’s financial system are having the intended effect. But those sanctions still allow room for Russia to sell oil and gas, and Russia happens to be benefiting from high energy prices caused in part by its own invasion of Ukraine. Some analysts think Russian President Vladimir Putin timed his invasion of Ukraine on the departure of former German Chancellor Angela Merkel in December, or even Joe Biden’s replacement of Donald Trump as U.S. president last January. But it’s more likely high energy prices in the run-up to Russia’s Feb. 24 invasion persuaded Putin he’d have a cushion of energy revenue, even with inevitable sanctions. 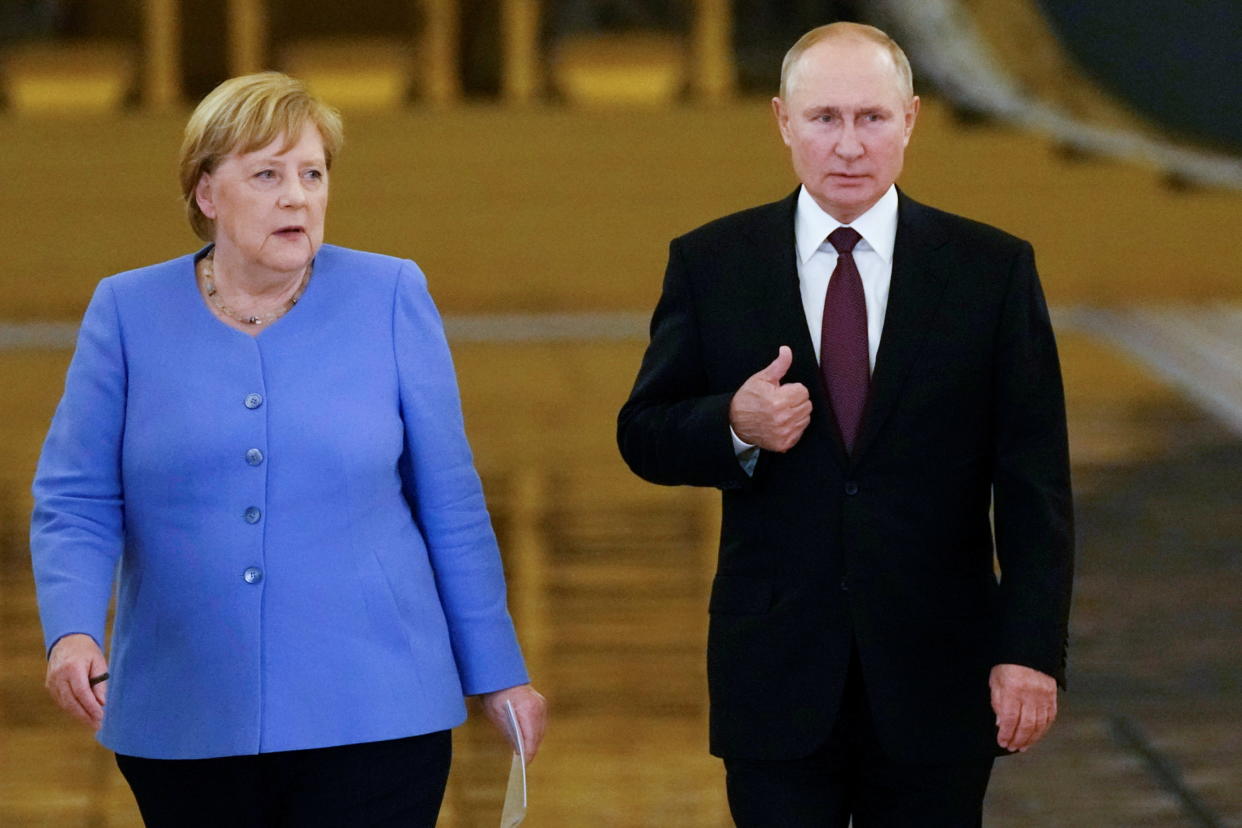 Russian energy revenue hit $76 billion in the fourth quarter of 2021, the highest level in 10 years, according to the Institute for International Finance. The research group thinks higher oil and gas prices now could be pushing Russia’s energy revenue higher still, even with sanctions. That’s why European nations and others imposing sanctions are now considering going further by stopping oil purchases altogether or tightening financial sanctions in a way that would effectively prohibit the financing required for those transactions to go through.

If either of these things happen, a key factor is whether large energy purchasers such as China and India would buy most or all of the oil Russia would be unable to sell elsewhere, which they might get at a sizable discount to global prices. If they do, it would obviously be a lifeline of sorts to Putin’s military financing. The United States is leading the effort to cut Russia off, a pressure campaign that could remake global relations for years to come. The military battle inside Ukraine probably won’t metastasize into World War III, but the economic battle may force fence-sitter nations to pick sides and suffer the consequences.

An opaque fight over technology

Global energy markets provide minute-by-minute accounting of how the energy war is likely to affect prices and the global economy. The battle over technology available to Russia is far more opaque. The United States and many other nations have passed sweeping bans on sales of computer equipment and many other items to Russia, in a broad effort to impose pain on Putin and the Russian economy. Some of that technology has military applications that could directly affect Russia’s offensive in Ukraine.

Russia has vast stockpiles of Soviet-era military hardware, but its stores of advanced weapons are more limited. British researchers examining the remnants of Russian weaponry in Ukraine discovered a heavy reliance on components from the United States and other countries now helping Ukraine battle Russian forces. Russia’s war-making capabilities include U.S.-made circuit boards in the advanced Iskander-K cruise missile, U.S.-made fiber-optic gyroscopes in the 9M949 artillery rocket and a British-made oscillator in the TOR-M2 air-defense system.

“Almost all of Russia’s modern military hardware is dependent upon complex electronics imported from the U.S., the UK, Germany, the Netherlands, Japan, Israel, China and further afield,” Jack Watling and Nick Reynolds wrote in a recent report for the research group RUSI.

The Pentagon says Russia is beginning to have “inventory issues” with precision-guided munitions and is relying more on “dumb bombs” that are far less accurate. It’s hard enough to build sophisticated weapons, and “here the Russian military industries face a problem,” according to the RUSI report: “Russia’s latest weapons are heavily dependent upon critical specialist components manufactured abroad.”

Putin and his advisers famously miscalculated by planning for a quick military campaign that would promptly remove Ukraine’s elected government. That fumble has left Russia with a shell shocked army that has lost at least one-fourth of its combat power and a grinding war Russia could actually lose.

Another consequence is that Russia is surely scrambling to find foreign components it needs to rebuild key weapons stockpiles. Russia doesn’t need to buy that gear directly from the companies that make it, which in most cases would be violating sanctions by supplying anything to Russia. Instead, Russia is likely seeking components through third-party or black-market sources, or even theft. Western governments are likely trying to foil such acquisitions. While troops fight on battlefields, supply-chain warriors battle in the shadows.

No end in sight

A popular theme is that Putin wants some sort of victory he can tout by Russia’s “Victory Day” on May 9. But by nearly all accounts, there’s no chance of any resolute outcome that soon. In reality, the twin military and economic wars are likely to last for months, if not longer. Europe is beginning to plan for a shortage or complete lack of Russian energy next winter. The point of a phased embargo on Russian oil would be to squeeze Putin over a period of weeks and months. Putin, for his part, has given signs he is preparing the Russian public for a slog, which could include new conscription to help replace soldiers dying and getting injured in Ukraine. Maybe we’ll know the outcome by May 9, 2023.

Markets are probably not prepared for an intensifying economic war between Russia and much of the rest of the world. Energy prices spiked and stocks fell after Russia invaded on Feb. 24, but markets have since stabilized. In the United States, traders are once again paying more attention to inflation data and the Federal Reserve than they are to geopolitical hotspots.

The Institute for International Finance predicts that oil prices could hit $200 a barrel if there’s a full and effective embargo on Russia oil. The only time U.S. oil prices were at that level, on an inflation-adjusted basis, was in 2008, as a deep recession was forming. Other factors hurt the economy more than oil prices back then, but we have other problems now, as well, including non-energy inflation and a rapid pivot from monetary easing to tightening. Recessions usually arise from a confluence of factors, rather than one single source, and there are still some economic shock waves likely to emanate from Russia’s military barbarism.

Rick Newman is the author of four books, including “Rebounders: How Winners Pivot from Setback to Success.” Follow him on Twitter: @rickjnewman. You can also send confidential tips.