The great Easter getaway NIGHTMARE: Major engineering works on the Tube and railways, under-staffed airports and FA Cup threaten mayhem – as RAC say record fuel costs will make it most expensive ever

Millions of travellers face an Easter Bank Holiday getaway nightmare of disruption and spiralling prices on trains, planes and the roads.

Large swathes of the rail network will close for £83million-worth of engineering works over the busy four-day weekend.

More than 500 signalling and track upgrade projects across the country include the closure of London’s Euston and Victoria stations to most services.

It will cause chaos for the thousands of football fans travelling to the FA Cup semi-finals, between Manchester City and Liverpool and Chelsea and Crystal Palace, at Wembley stadium. 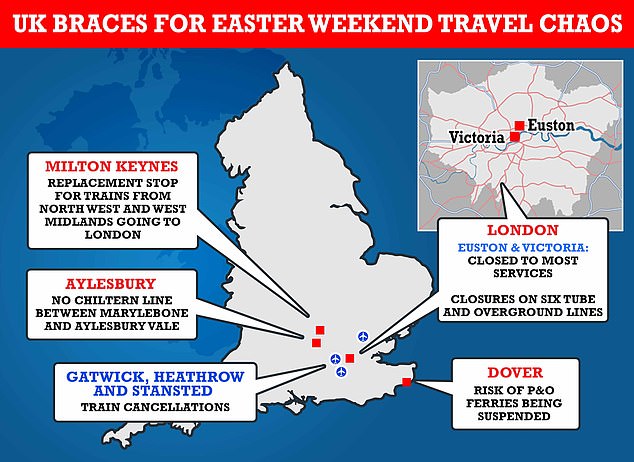 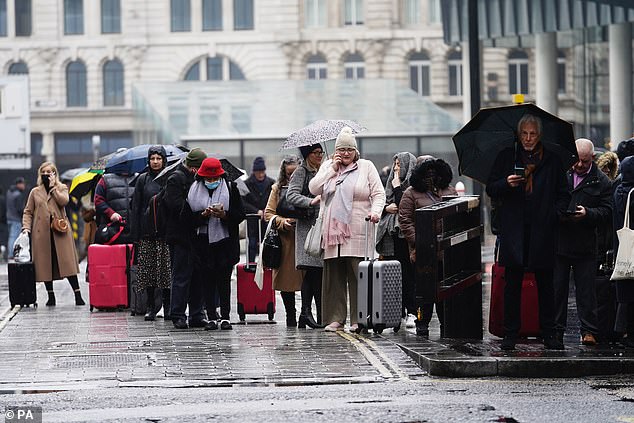 There is set to be travel disruption across the country this Easter weekend. Pictured are commuters in central London during the recent Tube strike

Trains into London from the North West and West Midlands will instead stop at Milton Keynes Central, meaning other routes into the capital face being overwhelmed.

The FA is urging fans from the North to avoid the railways and use specially laid-on buses or travel before the weekend instead.

All Southern trains between London Victoria and East Croydon have been axed, also causing havoc for air passengers landing at or trying to reach Gatwick Airport.

London Underground services on the Piccadilly line to Britain’s busiest airport, Heathrow, will be suspended while buses will also replace trains for part of the journey between the capital and Stansted Airport.

London Tube closures on the District, Hammersmith & City, Northern and Docklands Light Railway lines will also make it harder travelling around the capital.

Dave Penney, Network Rail’s North West and Central region specialist, warned passengers to ‘travel either side’ of the four-day weekend.

He added: ‘There is never an ideal time to shut the railway and we have to carefully balance the best time to do this essential work with the needs of our passengers.

‘Long Bank Holiday weekends continue to give our engineers the time they need to close the railway for complex jobs like track replacements and bridge overhauls while disrupting the fewest number of people.’ However, post-Covid travel patterns now often see more people use trains at weekends rather than weekdays as much of the workforce continues working from home. 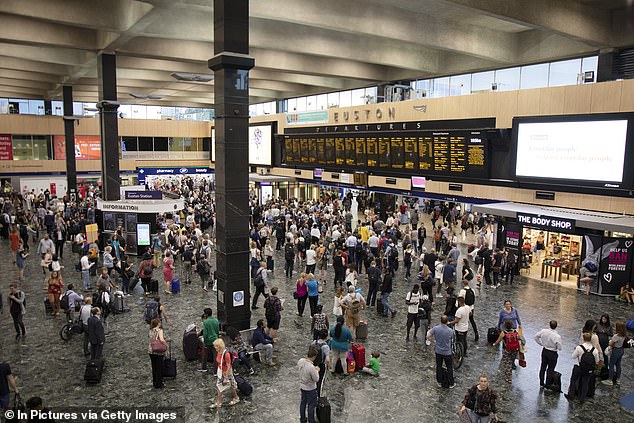 Many tickets will be more expensive after the Government last month (MAR) hiked fares by nearly four per cent.

Meanwhile motorists have been warned they face the most expensive Easter Bank Holiday getaway on record.

Over half of Britain’s more than 30million motorists are expected to take to the roads over the four-day weekend.

Analysis by the RAC found petrol and diesel prices rose by a record 11p and 22p a litre last month (MAR), the biggest monthly increase since it started collecting data in 2000.

The crisis in Ukraine, due to Russia being the world’s third-largest oil producer, has pushed up pump prices.

But average diesel and petrol prices have since only dropped by around 3p and 4p a litre respectively.

Yesterday average petrol prices were 162.91p a litre for unleaded and 176.98p for diesel.

It means it costs nearly £90 to fill the typical 55-litre tank in a family car with petrol and £97 for diesel. 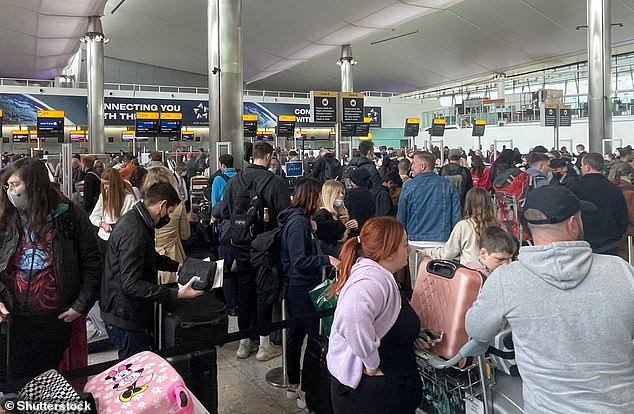 The RAC’s fuel guru, Simon Williams, said: ‘Sadly this Easter, traditionally the biggest getaway time of the year on the roads, is shaping up to be the costliest on record for drivers and there’s very little they can do to escape the high cost of filling up.’ Chaos could also continue for air passengers as travel firms race to recruit more staff to deal with soaring traveller numbers.

Airlines, mostly British Airways and easyJet, have cancelled hundreds of flights in recent weeks, partly due to staff shortages.

Huge queues have also formed at check-in gates, security halls and baggage collection areas in airports due to understaffing.

Manchester Airport has been at the centre of the most chaotic scenes, with snaking queues also reported at Heathrow and Birmingham.

Tim Jeans, director at Cornwall Airport in Newquay, told the BBC: ‘The fix of this is not easy.

‘It takes at least 12 weeks to recruit and to train new security staff because that’s where the problem mainly lies, so I would say that unfortunately it’s going to be the middle of June before we see a significant easement of these issues.

‘But again, let’s be clear, they’re not universal across the UK.’ 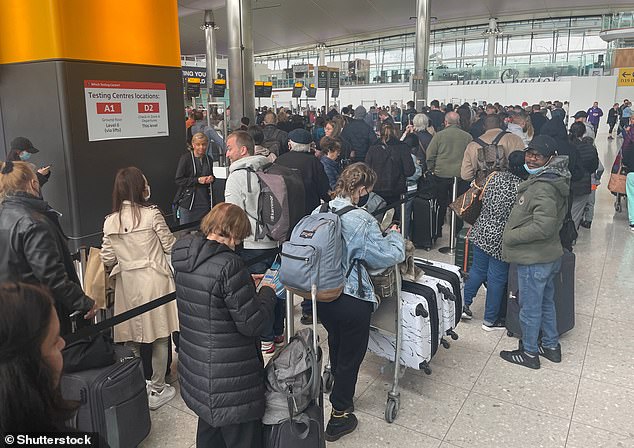 British Airways axed at least 78 flights scheduled to and from Heathrow for Wednesday, while easyJet called off at least 30 at Gatwick. Pictured: passengers queuing at Heathrow Terminal 2 today

There is also the threat of chaos at the Port of Dover for those travelling to the Continent if P&O ferry services are still suspended over its jobs massacre scandal.

Strike action by the militant RMT union over Easter Saturday and Sunday will also cause chaos on all TransPennine Express routes, with the operator warning against all travel.

The walkout will cause major disruption between Glasgow and Liverpool and Edinburgh and Grimsby to Manchester, also affecting fans trying to reach the FA Cup semi-finals.

Kathryn O’Brien, a TransPennine Express director, said: ‘Sadly, strike action by RMT means there will be major disruption to our services over the bank holiday weekend, and we are recommending people avoid travel on Easter Saturday and Sunday.

‘With major events, including the Manchester City vs Liverpool FA Cup semi-final, planned to take place over the affected dates, we are urging people to plan ahead and seek alternative transport.’

A P&O ferries spokesman said it was hoping to have two ferries resuming the cross-Channel Dover-Calais route by next week, subject to approval by the Maritime and Coastguard Agency. 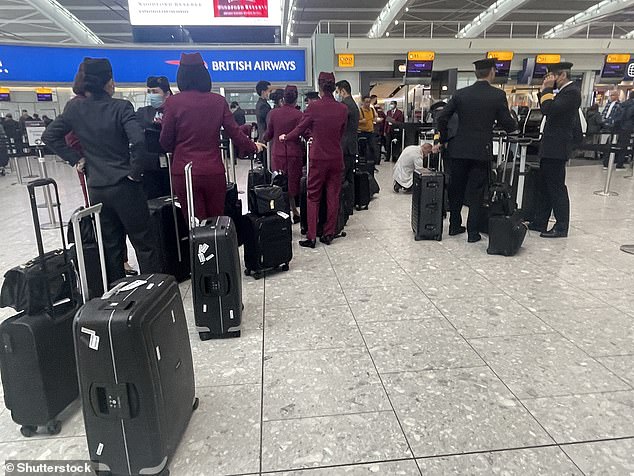 Over 1,140 flights were grounded at Heathrow, Gatwick, Manchester and Birmingham in the week up to April 3. Pictured: Pilots and airline staff waiting at London’s Heathrow Airport today