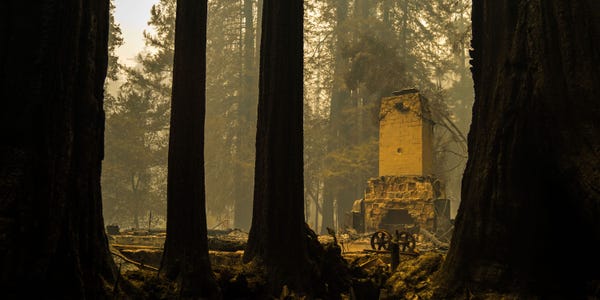 Big Basin Redwoods State Park in California will be closed to visitors for at least a year after the park incurred major damage from the wildfires that blazed through the state in August, the San Francisco Chronicle reported on Tuesday.

Last week, the CZU Lightning Complex Fire burned through the park, destroying hundreds of redwoods in its path and leaving charred rubble covering the forest floor.

Most of the redwood trees, some of them as old as 2,000 years, survived. Laura McLendon, conservation director for the Sempervirens Fund, an environmental organization focused on protecting redwoods, told the Associated Press that she is hopeful about the recovery of the park.

"It will regrow. Every old growth redwood I've ever seen, in Big Basin and other parks, has fire scars on them. They've been through multiple fires, possibly worse than this," McLendon told the AP.

Another concern for park officials is the soil, dried out from the wildfires. Unable to retain moisture, the soil covering Big Basin poses a much higher risk for floods when rains arrive in winter.

"My heart really does break," Spohrer told the San Francisco Chronicle. "The memories here. The generational commitment … this is a really meaningful place to all of us."

The public will not be safe at the state park for at least one year in part because park officials need time to determine which trees must be removed and which can stay, Spohrer said.

Earlier this week, Spohrer told the AP that the state's parks department has only inspected buildings in the state park so far.

"If this is not a gut punch, then you're not truly conscious as a human being," Newsom said, according to the Chronicle.