Princes Hill Secondary College dux Lucy Harrington had never studied philosophy before she made it one of her five VCE subjects, but her inexperience was no barrier to excellence: she blitzed it with a perfect study score of 50.

Year 12 was tough at times for Lucy, who has a vision impairment and required extra time and rest breaks to complete exams. 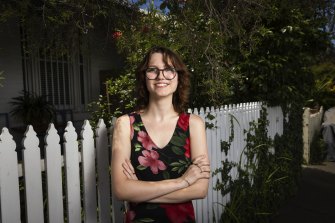 Princes Hill Secondary College dux Lucy Harrington is the only student in the state who scored a perfect 50 in VCE philosophy. Credit:Paul Jeffers

It was also tough on her family, she says, who she used as stand-ins for classmates during lockdown for regular in-depth discussions about the works of Descartes, Aristotle, Nietzsche and other philosophers.

“With something like philosophy, I thought it was important to discuss and explain the concepts and I would just continuously do that to whoever was willing to listen to me, which was mostly my family,” she said. “They definitely got the brunt of it.”

Lucy is among hundreds of students across Victoria who achieved a perfect study score in at least one subject this year, but is also the only student to score 50 in philosophy.

The VCE honour roll, which includes the names of almost 14,000 high achievers this year, includes just 15 students who stood alone in scoring 50 in a particular subject.

Seven of these were languages students, while the other eight, including Lucy, excelled in subjects that often don’t attract large enrolment numbers.

Hope Kaczynski, who attended select-entry government school Suzanne Cory High, scored a 50 in VCE ancient history and hopes to keep studying history next year, with plans to enrol in an arts/science double degree at Monash.

In a move that is right on point in a pandemic, she intends to study immunology as the science component of her degree.

“What I’m doing is just following my interests because I know if I do something I like, it won’t feel like work,” Hope says.

Taylors Lakes Secondary College student Aimeree Manabat isn’t even in year 12 yet, but was good enough to outscore all other Victorian students in creative and digital media, scoring a 50 in the VET version of the subject while in year 11.

Aimeree, 17, designed the digital branding for a fictional doughnut store and made an animated water safety video.

Previously, she was unsure if she was cut out for a career in design, but her top marks have given her the confidence to go further with it, she says.

“I was expecting, I suppose, a standard score. I was surprised and ecstatic, I didn’t have any words when I saw it.”

Melanie Nguyen has loved dancing since she was a child and has turned her favourite de-stress activity into academic success.

A year 11 student at Haileybury’s senior girls campus in Berwick, Melanie opened her results for her two VCE subjects on Thursday to find she had achieved a perfect study score of 50 in dance. She had choreographed and performed her own lyrical contemporary piece as well as sitting a written exam.

The result is all the more impressive for the restraints the pandemic put on Melanie’s ability to rehearse and show her teacher her work in-person.

“It was really hard over Zoom and hard with a small space and no studio,” she says.

“There was nowhere to really be able to work and rehearse and develop my solos with a substantial space where I could fully do everything which was really difficult.

“My teacher was really great. She got us to send her videos and she would get back to us really quickly.”

Despite her significant achievement, Melanie will keep dancing for fun and focus on studying law or commerce after completing school next year.

“I’m passionate about it and I love it but for me it’s always been an outlet outside school,” she says.