When we last left The Voice Season 22, on Monday, the Blind Auditions had wrapped, and the Battle Rounds had just begun with two Team Blake throwback country artists, old-school crooner Austin Montgomery and ‘90s-style growler Tanner Fussell. Both singers held their own on Johnny Cash’s “Folsom Prison Blues,” leading Blake Shelton to ponder, “There's two ways to go here, and they're both right.” Monday’s episode ended with a cliffhanger, but when The Voice returned Tuesday, Blake ultimately settled on Austin's “classic country sound," explaining, "I think it's important for this show to have an artist that represents not only country music, but that time period.”

Maybe Blake is tired of making such tough decisions, and maybe that’s why he has decided to leave The Voice next year after his 23rd season. But with his Austin/Tanner deliberation out of the way, at least he was able to sit out the rest of Tuesday’s hour-long episode in his comfy red chair, as the Battles got underway for his fellow coaches John Legend, Camila Cabello, and Gwen Stefani. And the most electric pairing of the night had to be Team Legend’s Dia Malai and Valarie Harding.

Dia and Valarie faced the additional challenge, on an already stressful night, of singing Jazmine Sullivan’s “Bust Your Windows” right in front of Jazmine Sullivan herself, as the two-time Grammy-winner was John’s surprise guest adviser this week. “I can’t wait for my singers to see [Jazmine],” John giggled as he prepared to enter the rehearsal room. “We’re going to pop Jazmine out, and they’re going to faint!” 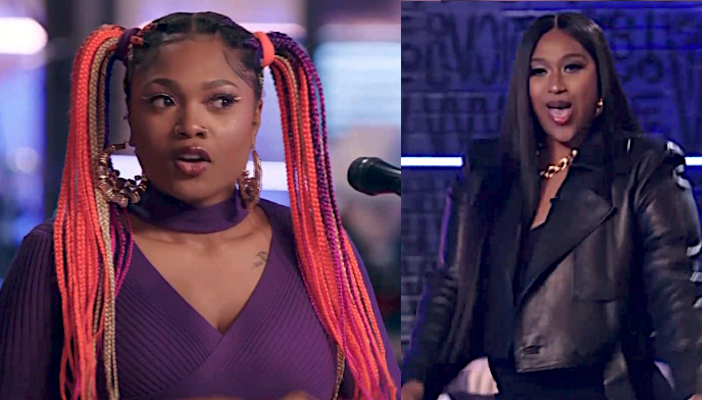 “Noooo!” Dia exclaimed when she caught sight of Jazmine. Dia later admitted, “I'm happy I didn't faint. … I hope when she watches this, she thinks I did a good job at keeping my cool.”

The “Bust Your Windows” assignment was a bit of a sneaky and even un-empathetic move on John’s part, considering that he has frequently stated that he dislikes it when Voice contestants cover his own songs in front of him. (That’s the reason why he didn’t turn for Justin Aaron’s “Glory” audition ton Monday, for instance.) But luckily, Jazmine enthusiastically appreciated both ladies’ efforts, and both ladies kept their cool during rehearsals.

Onstage, however, Dia was red-hot — or green-hot, as it were, in what John called her emerald-toned, fun-fur “dope outfit.” John loved how Dia really got into what Jazmine had called “Catwoman” character, and how she channeled the woman-scorned anthem’s “righteous indignation” and “carried herself with the demeanor of a star.” And there was no doubt that Dia was the star of this Battle. Blake said Dia gave an “overall more consistent performance,” Gwen said the “budding entertainer” with “attitude” stole her heart, and Camila said, “Dia, your face and your movement was conveying the emotion of the song. You're exciting to watch.”

But for all of Dia’s rock-star qualities, this duo’s 41-year-old veteran contender, Valarie, was the stronger singer. Blake called her voice “explosive,” Camila said she had “more of a mastery” of her instrument, and Gwen told her, “You really know your voice.” And in the end, John felt he had to go with the contestant who “can just flat-out sing,” choosing Valarie. “I do believe that Dia was a little bit better at being in character, but I feel like this is The Voice, and I still have to honor the better vocalist when I think about who's going to advance on my team. And I feel like Valarie has consistently been a better vocalist than Dia,” John explained.

What surprised me more than Jazmine’s cameo was the fact that John didn’t use his Save on Dia — considering that he seemed so enamored with her as a performer — or that none of the other three coaches, who'd all preferred Dia over Valarie, tried to steal Dia. Instead, we had to wait until the end of the night for a much more surprising reprieve.

Team Gwen’s Tuesday Battle pairing was 16-year-old theater prodigy Rowan Grace against her “bestie,” Jillian Jordyn, the 17-year-old Voice superfan who completely lost her composure during her Blind Audition. I was worried that Jillian would be the one to faint once Gwen’s adviser, Sean Paul, sauntered into the rehearsal room. But Jillian mostly held it together and sounded much better than she had the first time around, even if her nerves were still evident; John later praised her “clear and piercing tone.”

That being said, Rowan’s theater skills gave her the edge on Lauren Spencer Smith’s “Fingers Crossed,” as she truly tapped into the raw pain and fury of the teen-angst breakup ballad. She was also the far superior singer; John even called her a “revelation.” Gwen was “super-emotional,” of course, because she loves mentoring young female singers and was so proud of both girls’ performances, but she clearly had to go with Rowan. “It's pretty mind-blowing for a 16-year-old — your ability to be tasteful and heartfelt in the right moments, but on top of that, be able to do runs that are just coming from your heart. You nailed it,” Gwen gushed.

The night ended with two elder contestants, both experienced Nashville songwriters: 36-year-old Morgan Myles and 40-year-old Steven McMorran. I had been utterly underwhelmed by Steven’s snoozy one-chair, one-octave audition — so much so that I’d suggested he stick to songwriting and try out for Songland instead — so, I figured his hushed voice would be no match for this Battle’s song assignment, Miley Cyrus’s passionate power ballad “Wrecking Ball.” But Steven’s voice complemented Morgan’s fiery, Miley-like roar surprisingly perfectly. Morgan was still the star of this show, but Steven was a solid partner; the two shared amazing chemistry, and Steven showcased range I had not heard before. “It's crazy how good your voices sound together. … It was such a great duet,” raved Gwen.

Camila advanced Morgan to the Knockout Rounds, which was the obvious and correct decision, but it was a tougher decision than she’d probably expected. “Steven, I don't think that we have tapped into the song that has brought the house down yet. People don't know what you can do yet.” And that was why Camila used her one Save on Steven… during her first Battle ever! “I can't sleep peacefully knowing that we have not cracked the code yet — that moment for you, that song,” she explained.

This probably was premature on Camila’s part, considering what a strong overall team she has, because there are several more Battle Rounds episodes to go. But come back next week to find out who else gets saved, who gets stolen, or, like Dia, who gets sent home too soon.