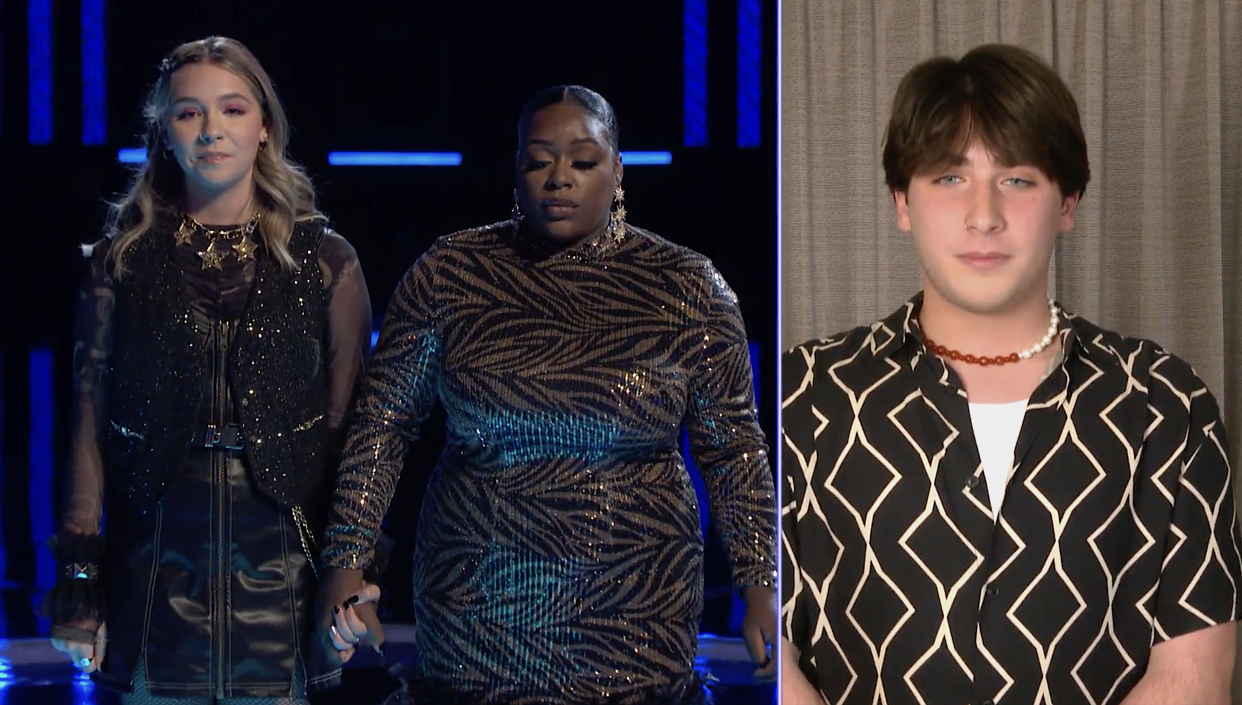 Tuesday brought The Voice Season 22’s top 10 results show, which determined the eight contestants moving on to the semifinals. But sadly, one of the contestants who didn’t move on, a former frontrunner, didn’t even get to bid a proper farewell.

At the start of the evening, host Carson Daly explained that seven singers would be voted through by America, based on Monday’s mostly excellent top 10 performances. And of course, the first artist to advance was the most excellent of all, true original and consummate risk-taker Bodie. Bodie’s lightning-quick rapped/sung cover of TikTok star JVKE’s “Golden Hour” on Monday had his proud and stunned coach, Blake Shelton, not only declaring it possibly “the hardest song I have ever heard someone try to do on this show,” but perhaps “the greatest performance I've ever seen on this show.” Thankfully, America agreed with that assessment. And I already can’t wait to see what Bodie does next week — and in two weeks’ time on the finale, because I can’t imagine him not going all the way at this point.

Also immediately advancing to the semifinals, before Tuesday’s first commercial break, was this week’s other standout rock star, Team Camila guitar goddess Morgan Michaels. This meant that rookie coach Camila Cabello would still be represented moving forward. Poor Camila started off with such a strong team that I once predicted she’d win this whole season, but then she quickly lost three of her four artists in the Live Playoffs, leaving her only with Morgan, her “last woman standing.” But Camila could still win it all with Morgan… and honestly, a top two consisting of Bodie and Morgan would make for one of the most thrilling Voice finales in years.

Two contestants that I’d hoped would be in that finale’s top four with Bodie and Morgan were Team Gwen’s indie-soul maverick Kiqué and Team Legend’s “Velvet Powerhouse” Kim Cruse — but frustratingly, both singers landed in the bottom Tuesday, despite giving dynamite performances the night before. The Kim result was shocking, considering that her cover of Rihanna’s “Love on the Brain” had been so electrifying that Carson actually believed Rihanna herself would approve. Gwen Stefani had even noted that Kim had been “underrated this season,” but “now everybody is going to wake up and say, ‘Why weren't we making a bigger deal about Kim?’” But apparently Gwen’s statement was only half-correct.

As for Gwen’s own at-risk contestant, Kiqué, I thought he’d admirably gotten back on track this week after landing in the bottom last week. But maybe the fact that NBC was forced to air a pre-taped Kiqué studio performance Monday — because he’d tested positive for COVID-19 and couldn’t appear on the live show — thwarted his chances. As Kiqué listened to Carson read off the bottom three results while he waited in isolation, my heart went out to the kid… and my brain wondered how he was going to remotely sing for the Instant Save from his quarantined hotel room.

Instead, the show aired another pre-taped performance, this time of Kiqué covering Leon Bridges’s “River.” The footage was quietly compelling, but I think Kiqué is the type of performer that runs on adrenaline — that’s how he won the Save last week — and I think if he’d been in the moment, on live television, the end result would have been much more fierce, more of a fight song. This footage appeared to have been filmed at the same time, last Friday, that Kiqué had performed “for robot cameras” (as he explained on social media) when shooting his locked-down top 10 performance — as in, the performance that had ultimately landed him on the chopping block. So, he seemed doomed tonight.

Team Blake’s Rowan Grace was the third singer in danger Tuesday, which was not a shocker — although she’d given a solid Billie Eilish performance on Monday and I honestly would have swapped her spot in the bottom three for her handsome but boring teammate, Brayden Lape, who I think peaked weeks ago. Rowan was the first of bottom three contestants to compete for that last spot in the top eight, and while her cover of Fleetwood Mac’s “Landslide” was pleasant and pretty, it didn’t have the grit, gravitas, or blood/sweat/tears to be a full-on save-me performance. It was unlikely that Rowan would be winning this showdown, by a landslide or otherwise.

And then there was Kim, doing a gospel-tinged version of Brooks & Dunn’s “Believe” (maybe a shrewd strategy to appeal to The Voice’s core country audience?). And while she seemed under-amplified, especially at first, she had the sheer lung power to overcome any faulty-microphone issues. She received a standing ovation from all four coaches, and her own coach, John Legend, told her, “I truly believe you're one of the best vocalists I've ever worked with.”

Five minutes and one commercial break later, the instant votes had been tallied, and America saved… Kim Cruse. I certainly could not argue with that verdict, and I hope that viewers finally realize how special she is and don’t take her immense talent for granted again. But I felt terrible for Kiqué, whose remote connection shorted out during the final minutes of the episode, so he only got 20 seconds to say goodbye to his coach and likely didn’t get to hear Gwen’s kind words of praise in the moment.

Hopefully Kiqué will be able to watch this episode back and see Gwen gush about him. “I can't believe you're in a box still,” she lamented, disappointed that she could not address him in person. “I've been on this show for six seasons, and [Kiqué is] probably the first artist I've ever worked with that I truly was blown away by his own artistry. I learned to trust him right off the bat. Whatever he wants to do, he's going to come with a vision, and it's just super-exciting to work with someone who is a pure artist like that.”

So now, Blake has three artists in the top eight (Bodie, Brayden, and Bryce Leatherwood), John also has three (Parijita Bastola, Omar José Cardona, and Kim), and Camila and Gwen only have one contestant each. Hopefully all eight singers will stay healthy and be able to complete live next week. But as a side note, I must say I enjoyed Gwen’s quirky and chaotic funhouse/house-party rendition of Talking Heads’ “Burning Down the House” with her last man standing, Justin Aaron, a lot more than I’d expected (even though I kept wishing that Kiqué could've been there for what was supposed to be a group number). At this point in the game, Justin probably shouldn’t take major risks and veer too far from his classic-R&B lane on competitive episodes, but it was awesome to see him rock out like this. And I dare say he almost upstaged rocker-girl Gwen with his vivacious performance.

Come back next Monday, to see who rocks the vote and makes to The Voice Season 22 finals.