A BRACELET worn by Margaret Thatcher on her first day in power may have made another historic appearance – on the wrist of Theresa May on her last day at No 10.

Mrs May was spotted wearing an identical piece of jewellery while waving goodbye to Downing Street yesterday with husband Philip. 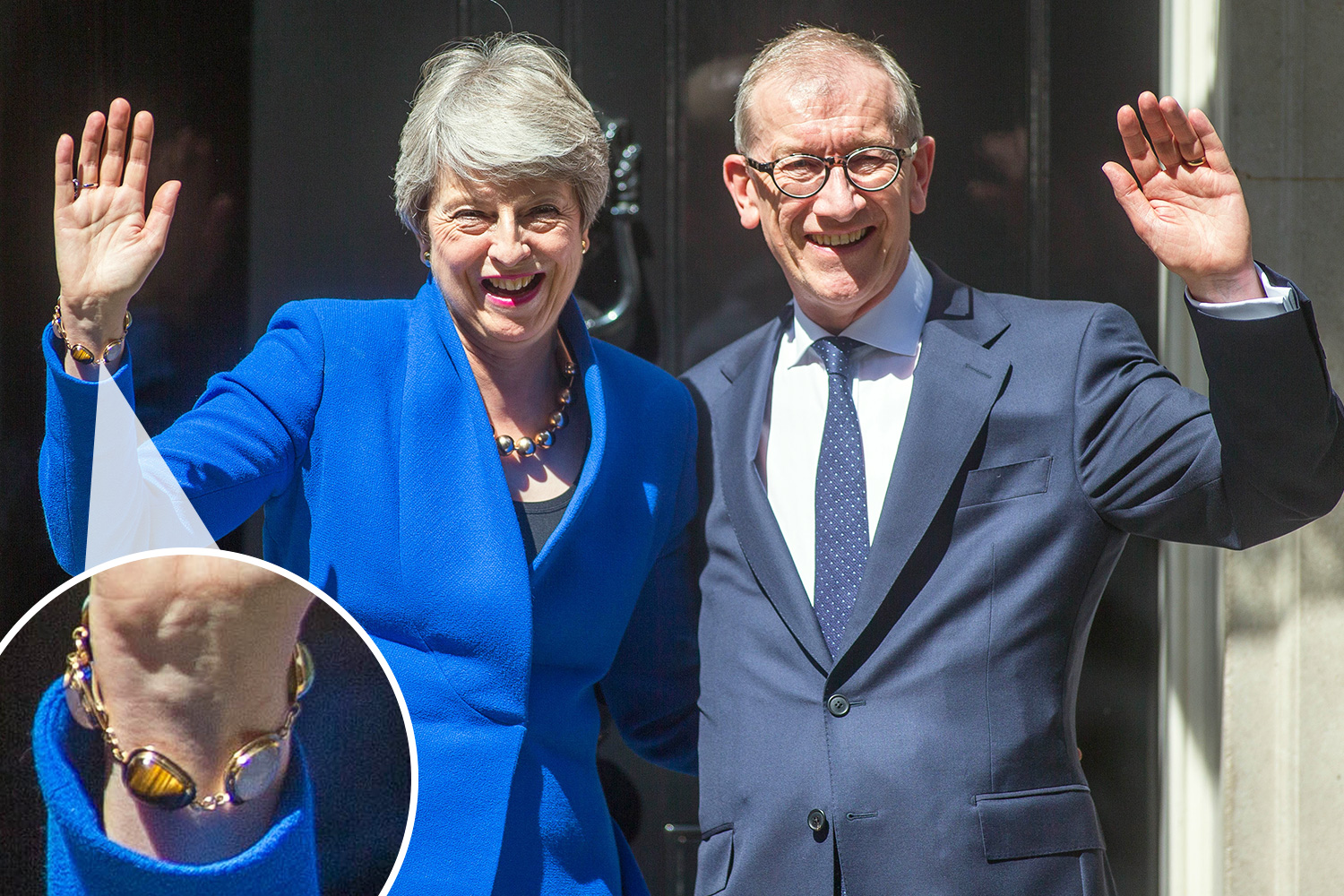 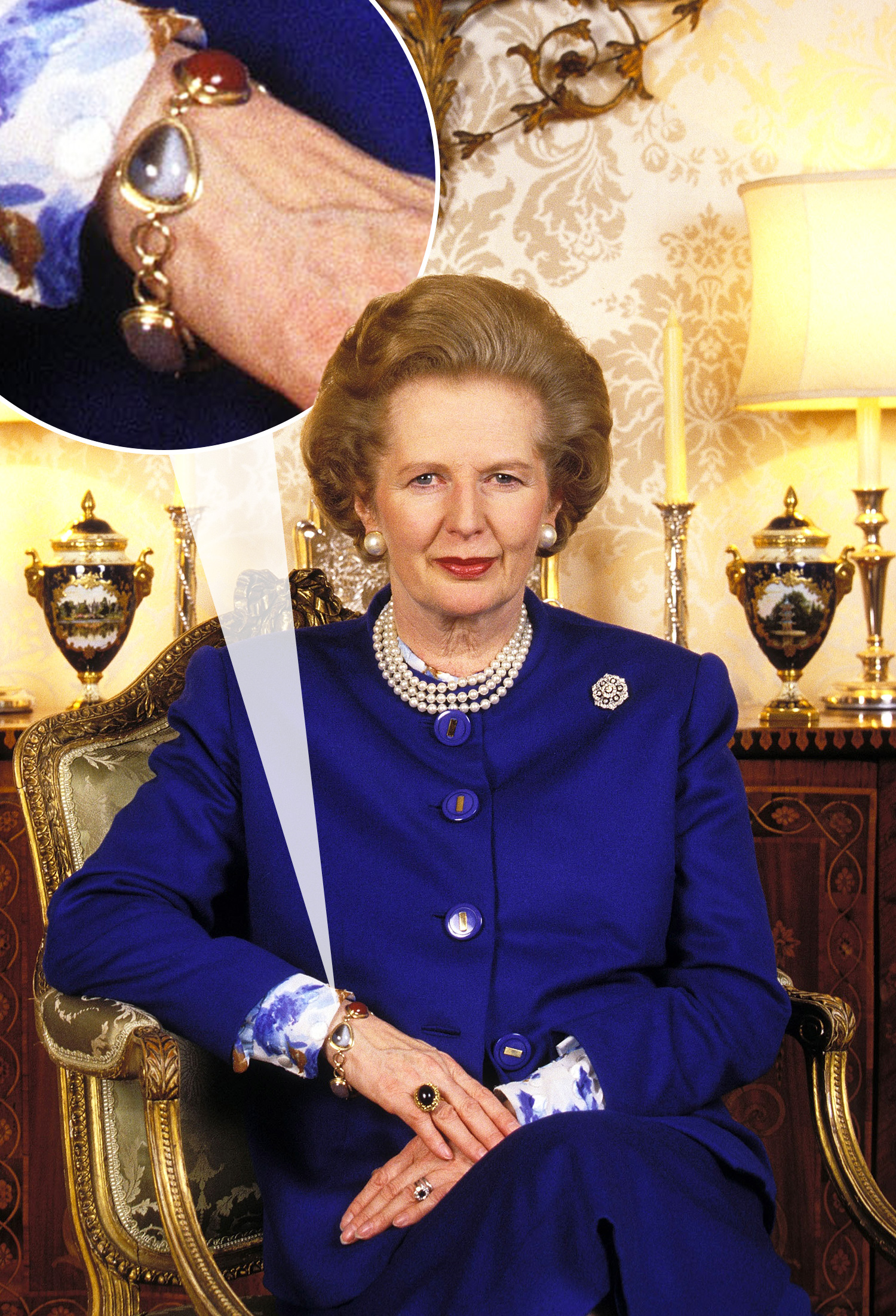 The revelations come after a mystery buyer snapped up Mrs Thatcher's gold 'pebble' bracelet at a Christie's auction back in May for £40,000.

The Iron Lady wore the trinket – which features cabochon gemstones – on several special occasions including her first day as PM in 1979.

She was also seen wearing the bracelet, a gift from husband Denis , when she met up with Russian leader Mikhail Gorbachev at Chequers in 1984 and during a meeting with Nelson Mandela in 1990.

The distinctive wrist-piece was normally worn along with a gold and amethyst ring when she posed for official pictures.

It went under the hammer along with 169 other personal items to mark the 40th anniversary of Mrs T's election as the UK's first female Prime Minister on 3 May 1979. 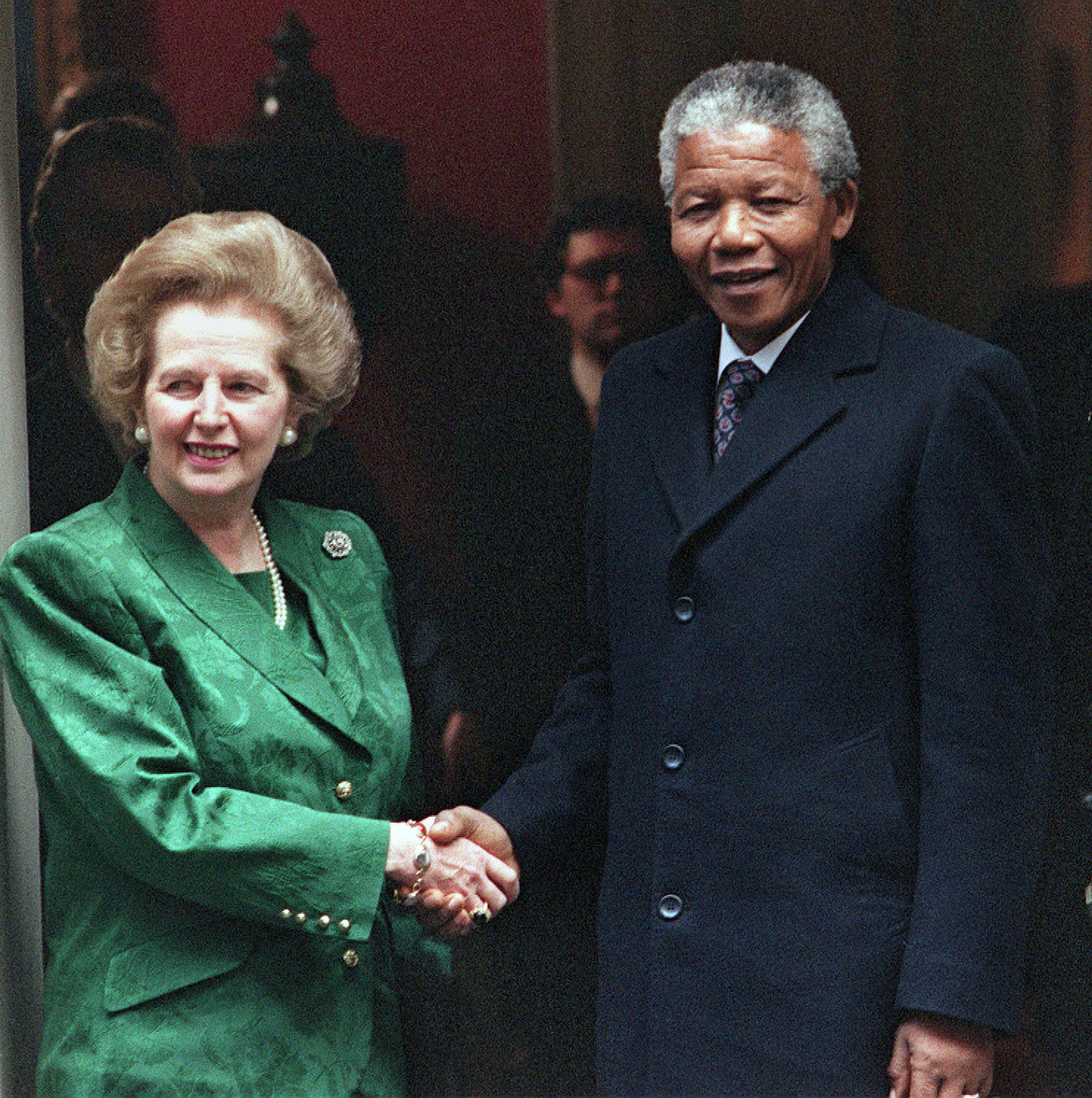 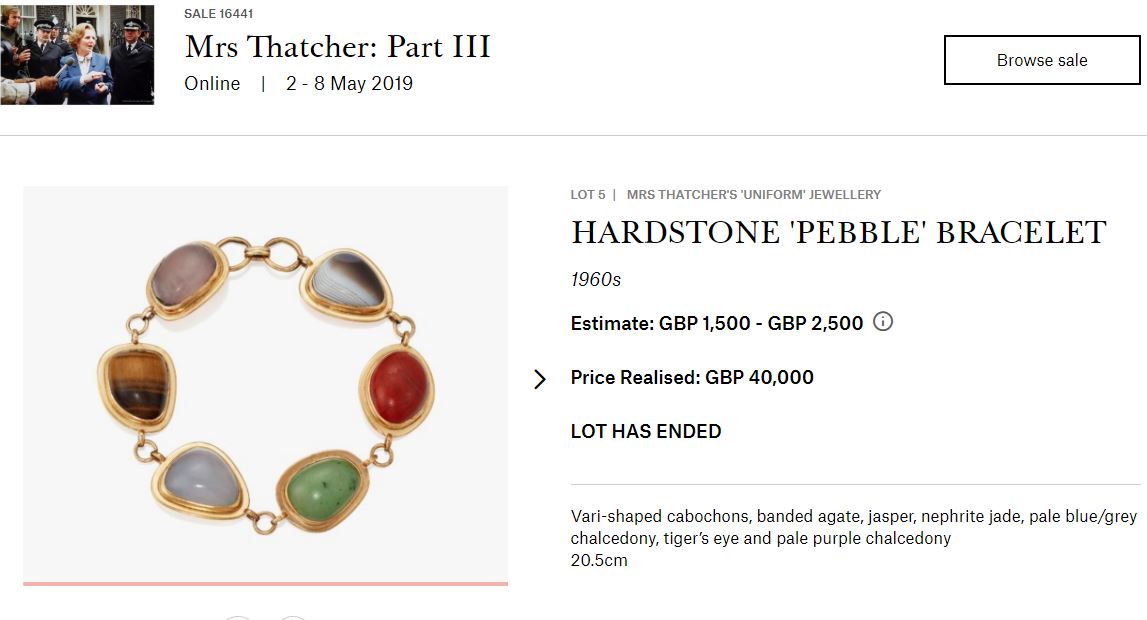 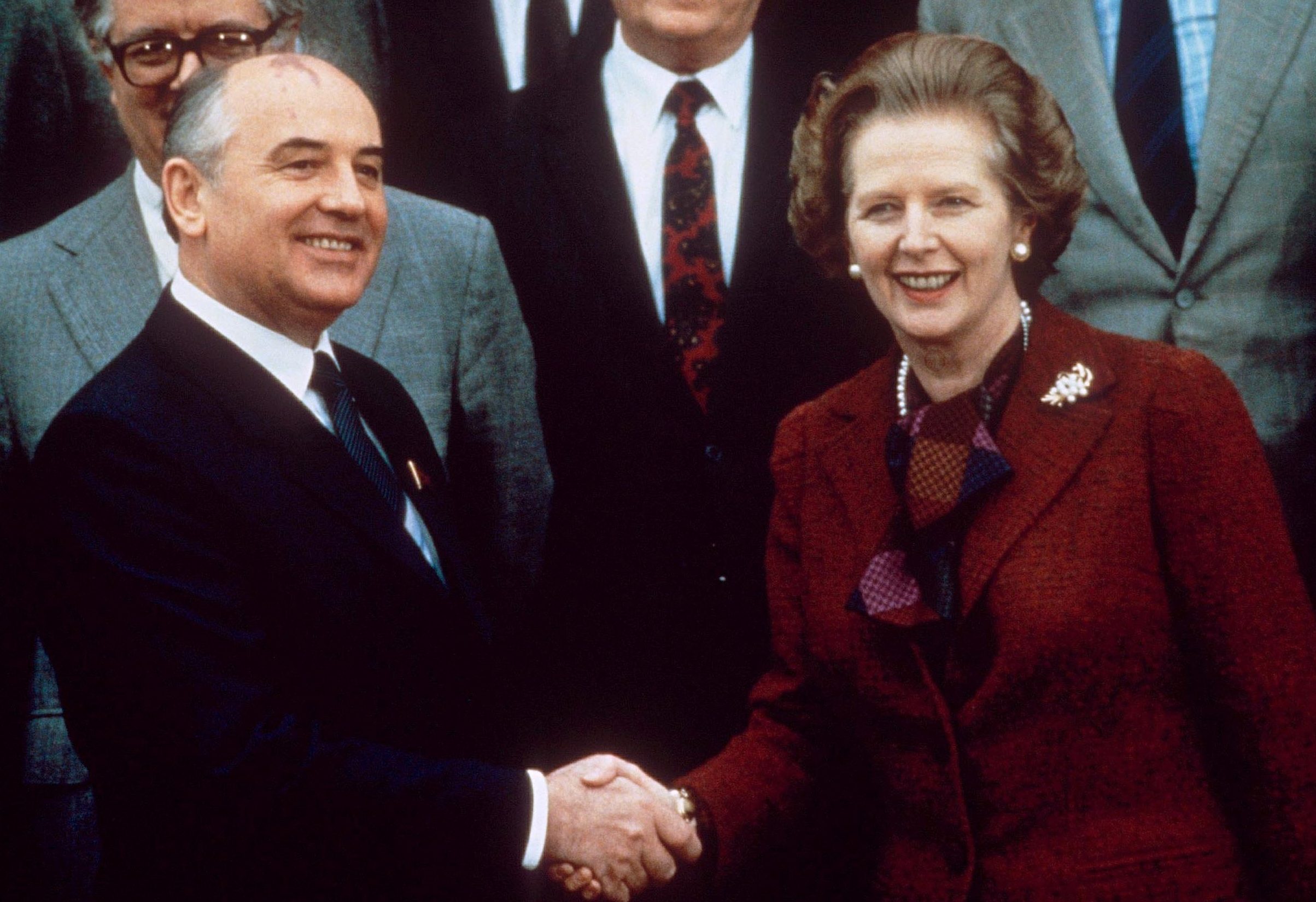 Despite an estimate of just £2,500 it eventually sold for £40,000, reports the MailOnline. And the new owner of the bracelet has never been revealed

Earlier today Mrs May channelled ANOTHER former Prime Minister as she started her life as a backbench MP with a trip to Lord's.

The ex-PM headed to the home of cricket today as England tried to bounce back in their one-off Test – and as Boris addressed the Commons as Prime Minister for the first time.

She was joined by Gavin Barwell, her former Chief of Staff, David Gauke, who was her Justice Secretary, and Greg Clark, who was her Business Secretary.

Mrs May was pictured looking happy and relaxed on her first day without the weight of Brexit on her shoulders.

The ex-Prime Minister seemed to be enjoying herself as a waiter handed her a cold drink.

Former Conservative PM John Major famously said "it's time for lunch and some cricket" as he slipped out of Downing Street and into the Oval cricket ground after resigning following the 1997 General Election. 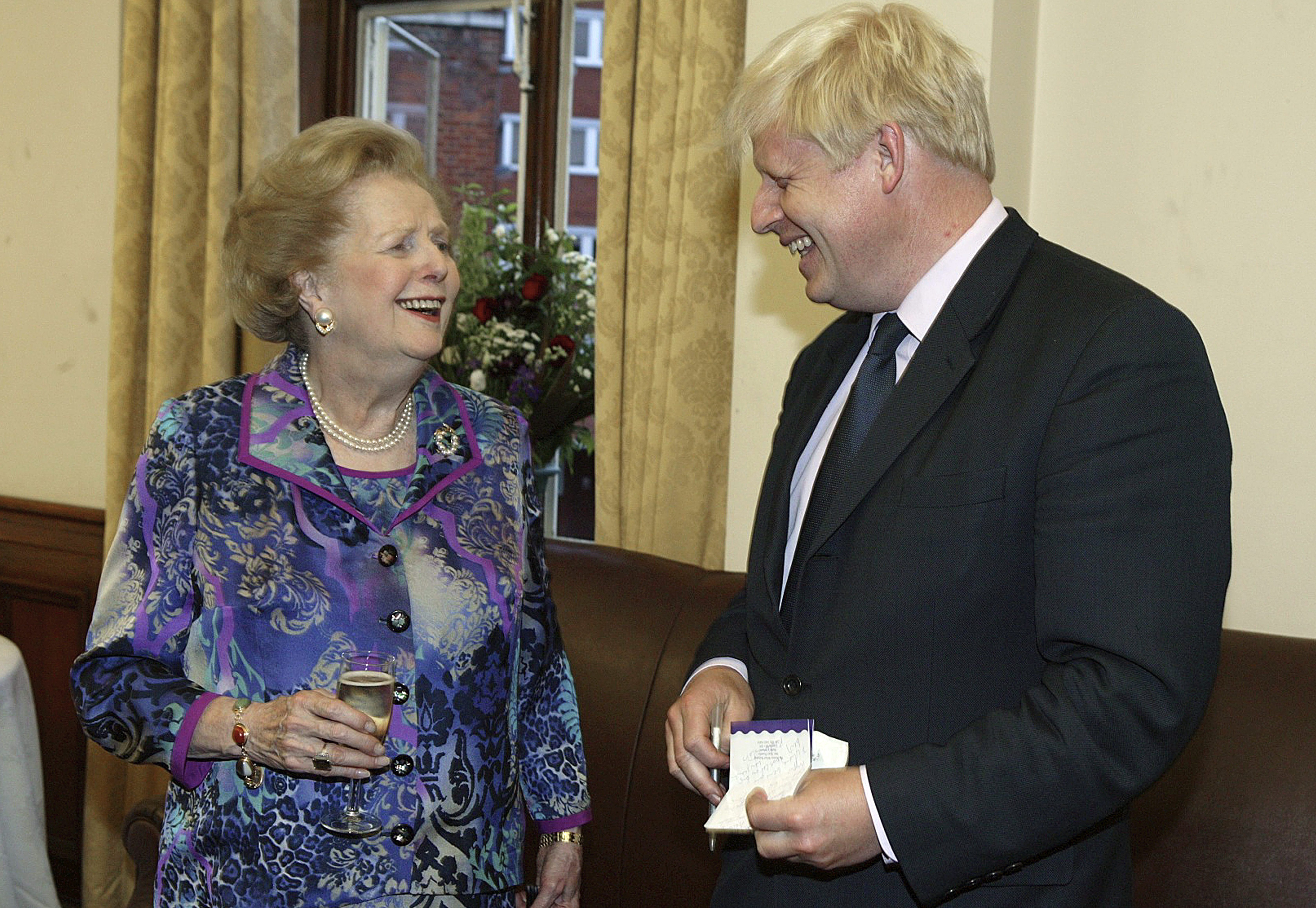 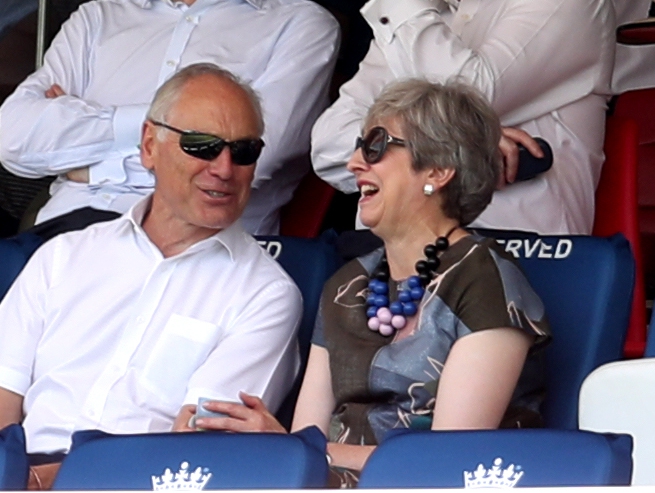 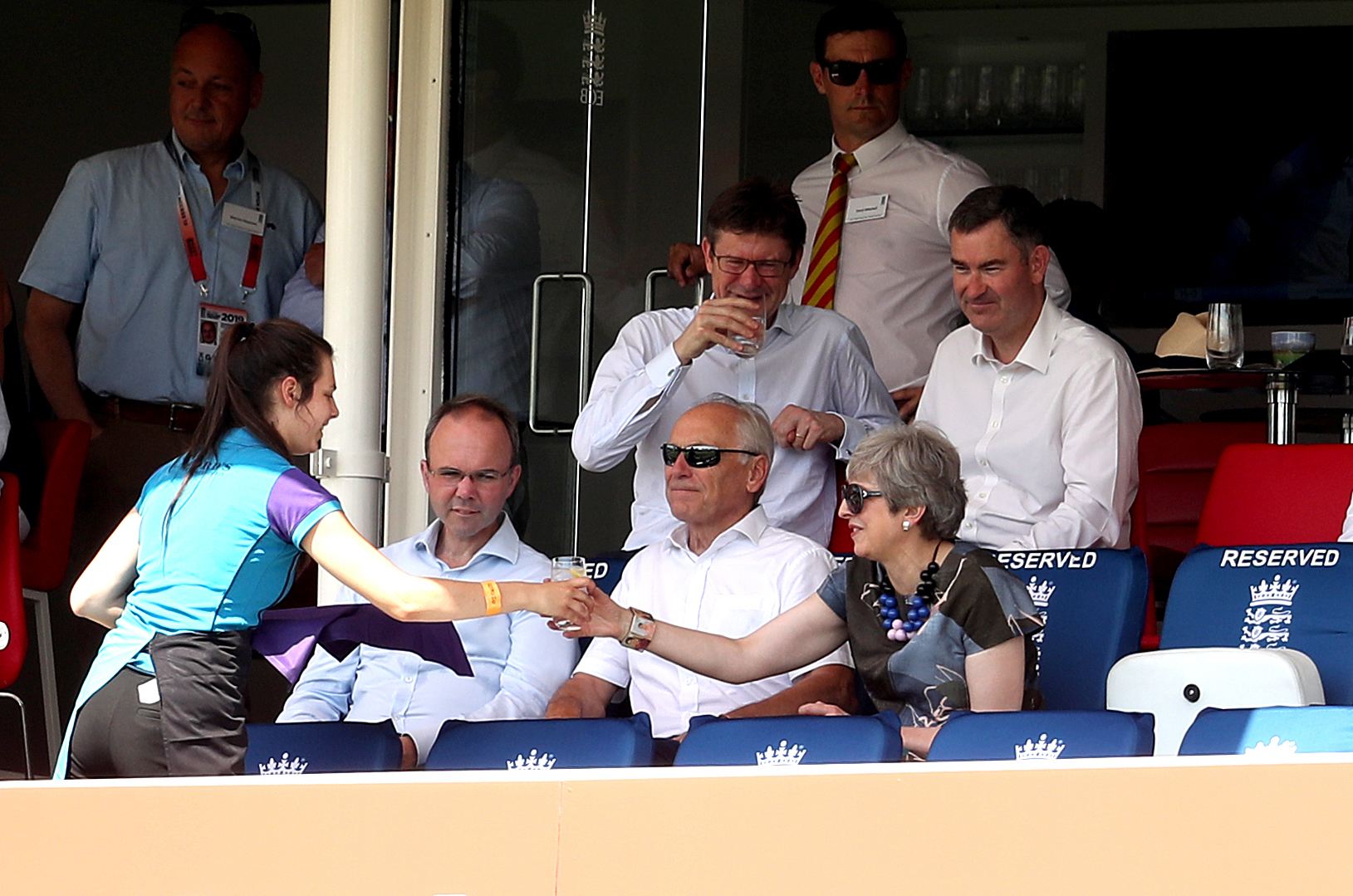 Theresa May has clearly followed suit.

Just days after being feted as World Cup winners in No.10, the cricket test team was humiliated by Ireland yesterday.

Mrs May watched the nail-biting World Cup success with husband Philip and spent two hours with the winning team in the Downing Street garden.

She had lunch with Philip on the same No.10 terrace yesterday in her final act as PM.

Mrs May vowed to support Boris Johnson from the backbenches as MP for Windsor and Maidenhead – a seat she has held since 1997.

Allies believe she will continue to campaign on areas she has championed during her time as PM – from modern slavery to domestic abuse and closing the gender pay gap.

Speaking yesterday, she added that she wanted to ensure the next Government do more on mental health.

She said: “We have put record funding into mental health and in having essential reviews. We now need to ensure that we implement the proposals and that we take this forward.”

Gavin Barwell, her Chief of Staff, said Mrs May was “emotional” about leaving.

Speaking yesterday morning he said: “I think there’s a mixture of pride at what we achieved and frustration at what we weren’t able to get done.”

Former deputy-PM Damian Green said he expected his long-time friend to be feeling “flat” at leaving.

He told The Sun: “She was presented with what turned out to be an impossible problem and despite pouring every ounce of energy into trying to find a route through she very sadly could not manage it.” 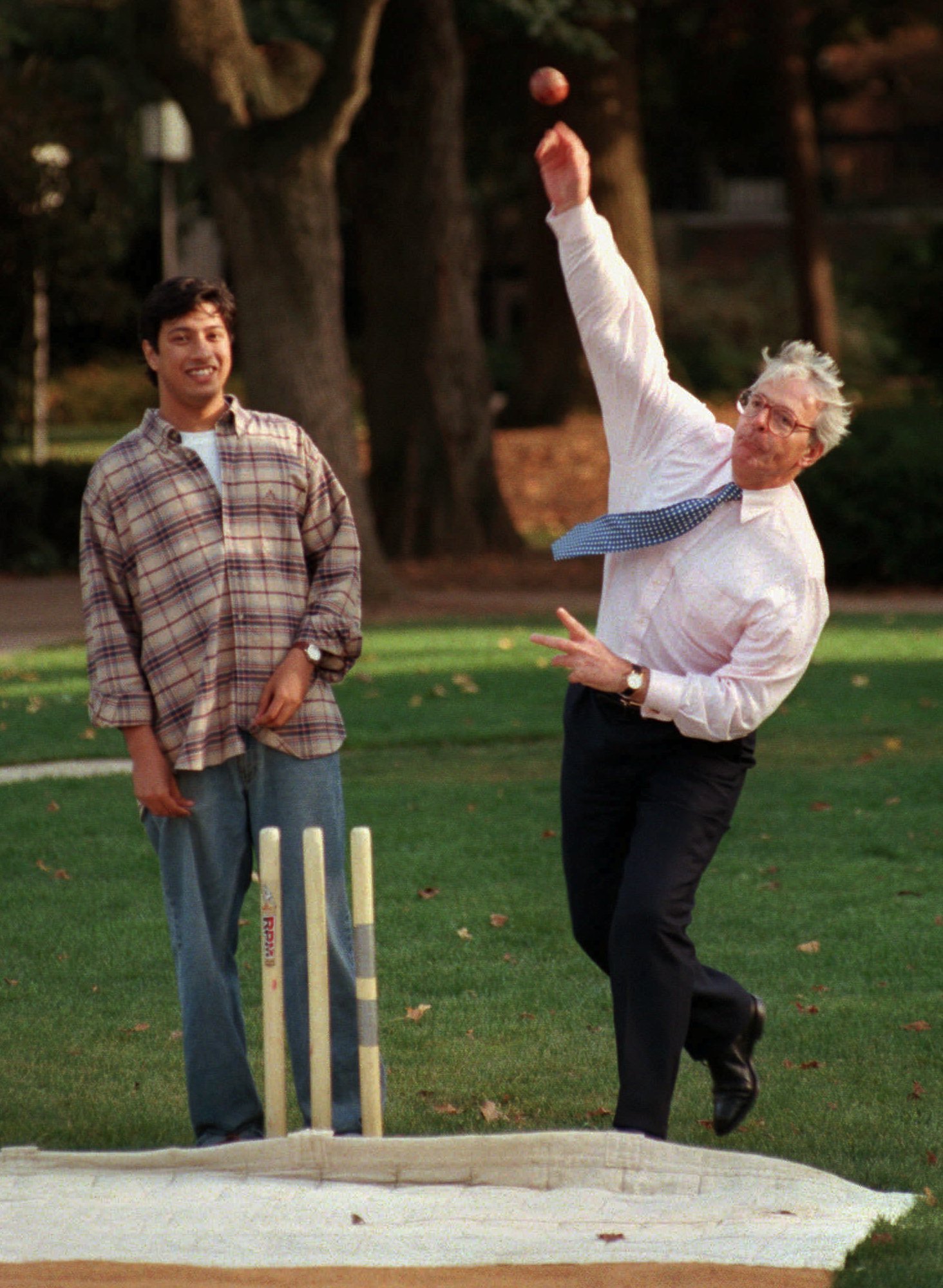 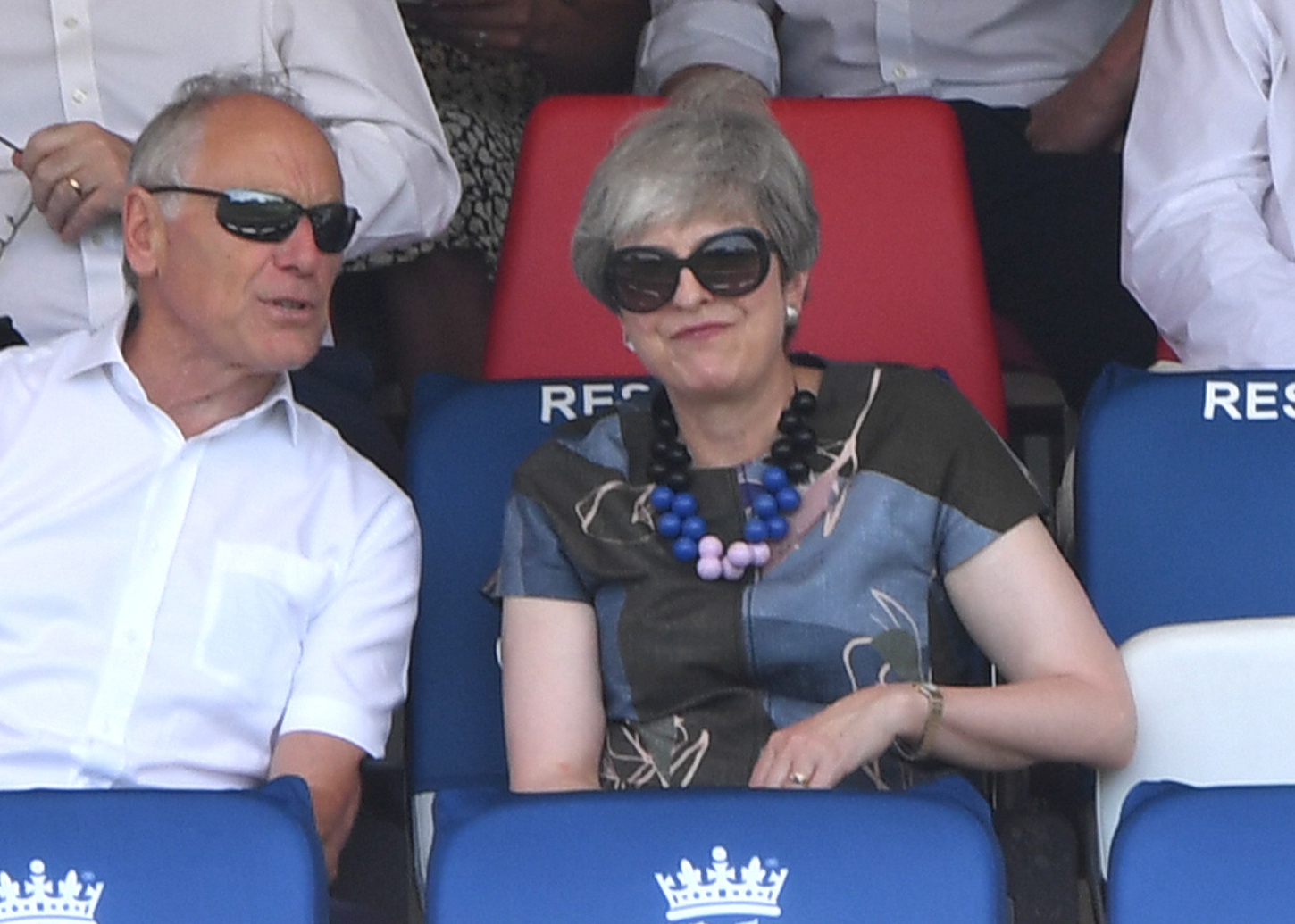 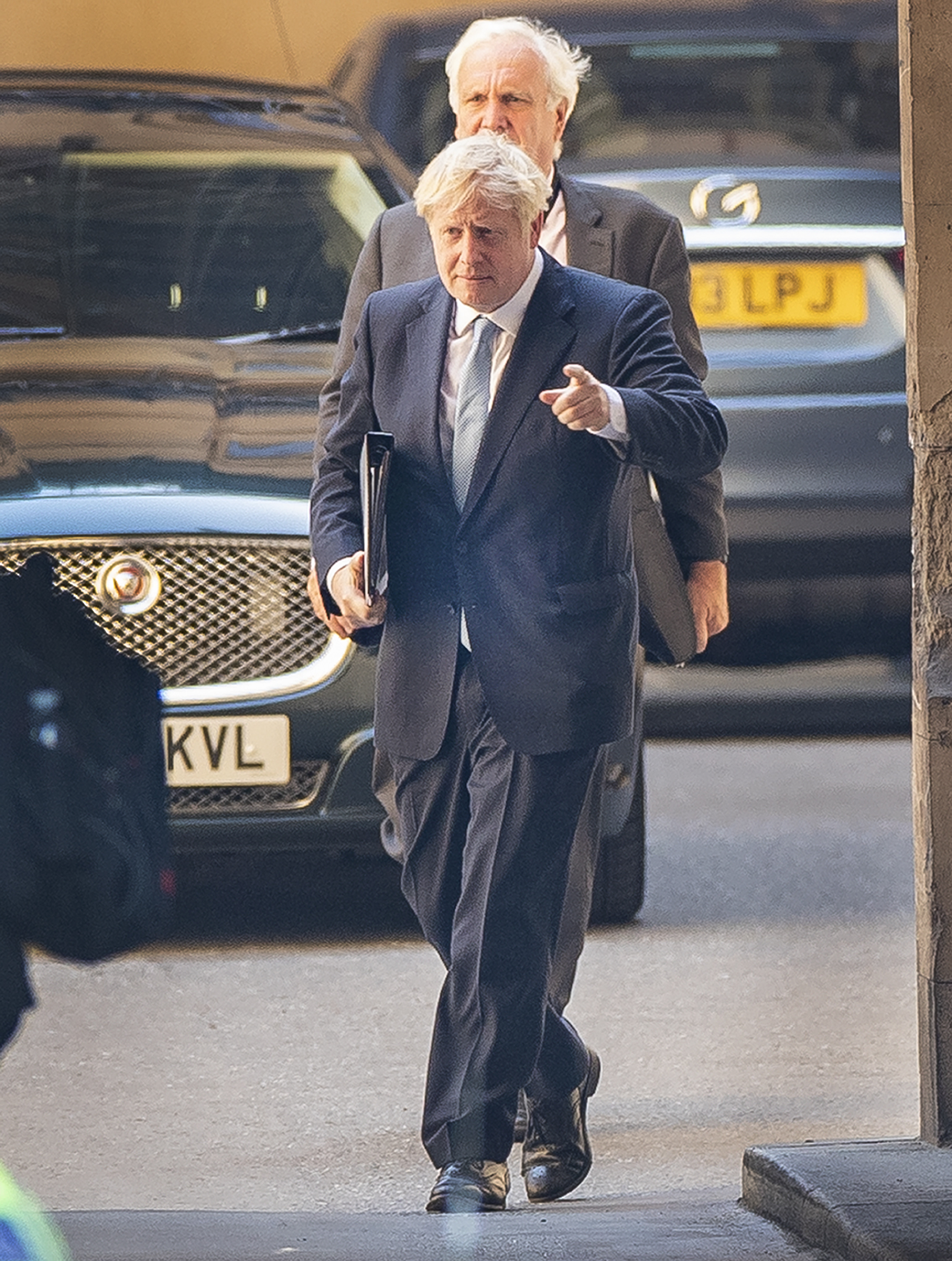