Sneaky thief swaps his own empty decoy bag for victim’s rucksack then walks off with a £1,500 haul of her laptop, iPad and headphones

This is the moment a sneaky thief swaps his own empty decoy bag for his victim’s rucksack to walk off with a £1,500 haul including a laptop, iPad and headphones.

The shocking theft was captured on CCTV in Moorgate, central London, on October 10.

Cameras captured the criminal lingering near a group as they enjoyed drinks at a pub.

He then uses his foot to hook one of the bags from underneath a chair in the disturbing footage.

Leaving his own bag in the other’s place, he walks out of the building with the woman’s property. 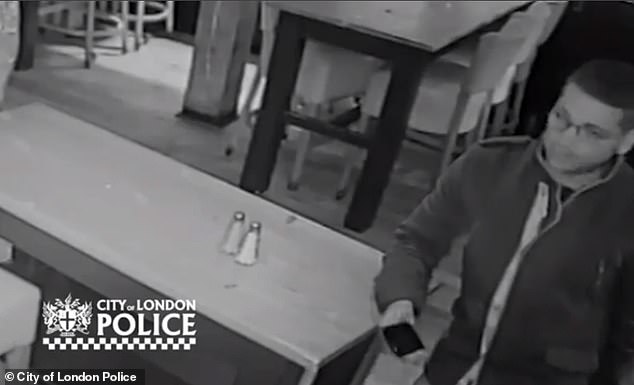 Pictured: This is the man police are looking to speak for after CCTV cameras captured a thief swiping a bag

Police are now hunting for the thief and have released video of the incident in the hope of tracking down the perpetrator.

City of London officers are asking the public if they recognise the thief and warning people to be on the lookout for similar tactics being used in the Square Mile.

Detective Inspector Andrew Clarke said: ‘Between June and September 2019, we have seen a 43 per cent increase in bag theft, mainly from licensed premises in the City.

‘It’s important people keep an eye on their belongings when they are out and about and keep them within reach at all times.

It can be easy to think your belongings are safe under a table or under a chair, but in reality, a busy pub or bar is the perfect environment for thieves to go unnoticed.

‘This particular thief has perfected his criminal activity, and even comes equipped with an empty bag to leave in the place of the stolen one. We would urge anyone who recognises him to get in touch.’