A Melbourne mother emailed us last week with a story that says a lot about the best and worst of Victoria’s overwhelmed hospital system.

The woman wrote that one night recently her preschool daughter was having a severe asthma attack. After taking her to one of the city’s major hospitals, she encountered a one-hour wait to be triaged. 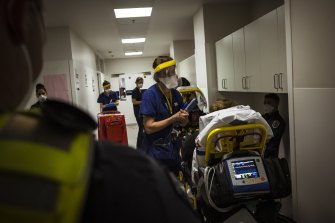 When they were seen, it was by a nurse who had long finished her shift, but was staying on to help to try to clear the queue of people waiting.

As it turned out, the little girl’s oxygen levels were dangerously low, and she needed immediate treatment, according to her mother, who was intensely thankful that the nurse had gone above and beyond what was required.

The next morning, as her daughter was wheeled to the ward, she saw a familiar face: the same nurse, on her way to work for a new day just hours later. “I was so grateful to be able to thank her”.

But the experience also worried her: “It seems wrong and risky Victoria’s healthcare professionals are being put in this position every day and are clearly being overworked in a life-or-death environment,” she said.

Her assessment is echoed by doctors who fear Victorian hospitals face a mass departure of burnt-out healthcare workers just when they are needed most.

While COVID-19 is no longer front of mind for many, hospitals continue to see a rising tide of demand from sick patients. Staff are tired and depleted. There are thousands of advertising nursing vacancies in Victoria.

Last week’s health-focused state budget included a promise for up to 7000 new health workers, but there is concern the new investments will not make an impact soon enough.

“If we go into the winter, without people being honest about the state of our emergency department we will continue to see an exodus of staff and more and more emergency departments will start to fall over,” says Victorian faculty chair of the Australasian College for Emergency Medicine Dr Mya Cubitt.

A number of doctor groups say more needs to be done to retain existing nurses and doctors, including bonuses encouraging experienced staff to work in regional hospitals, or incentives to stay in emergency medicine.

The causes of emergency department overcrowding are well-known and long-running. It largely stems from a lack of beds in other parts of the hospital.

Staffing shortages across the health system are again key, and the pandemic has exacerbated this, as nurses have been recruited for roles that didn’t previously exist, including on COVID-19 wards. Border closures have disrupted the supply of international workers.

Meanwhile, some patients languish in hospital for weeks or months more than they should waiting for an aged care bed or disability support.

Emergency departments become the metaphorical dumping ground for patients unable to get help in the places they really need it.

The Australian Medical Association has been campaigning (unsuccessfully to date) ahead of the federal election to get major parties to agree to raise the Commonwealth funding for public hospitals to a 50-50 split with the states, a move they say would bring $20 billion to hospitals over four years.

Accounts that the critically ill are waiting too long for care in Victoria’s hospitals suggests we may need to reach for somewhat uncomfortable short-term solutions, as well as long-term reform.

As an example, patients who break a bone could be cared for by an orthopedic team even if their ward was full, rather than staying in the ED for two days, suggested emergency physician Dr Simon Judkins, as and other parts of the hospital take on some excess load.

“We don’t want to compromise care in the long term, but in a time of crisis solutions like that actually take the heat off the EDs and ambulance services,” he said.