England’s great Covid vaccine divide: How parts of London have STILL only reached two thirds of over-50s… while half of councils have now hit 90%

London boroughs are still dragging behind the rest of the country in the Covid vaccine rollout, figures show as the Government pushes ahead with a campaign to get jabs to all remaining over-50s.

NHS England statistics up to March 28 showed that up to 93 per cent of people over 50 – the last of the priority groups – have now had at least one dose of the vaccine. But 2.8million are still yet to take up the offer.

However, uptake rates have been wildly uneven, with MailOnline analysis showing the two London boroughs of Westminster and Kensington and Chelsea have only reached two-thirds of eligible people.

For comparison, mid-Suffolk has already got around to vaccinating 94.3 per cent of its over-50 population, with fewer than 3,000 people left to immunise.

The government is aiming to offer all over-50s one dose of vaccine by the middle of April, just days before rules are loosened further across England, with pubs and shops allowed to reopen.

But NHS bosses have warned the roll-out to first-time patients will effectively be ‘paused’ in April because of supply issues, with GPs attempting to mop up eligible adults who have yet to accept their invite and to rattle through second doses.

Supplies of a third vaccine, made by US firm Moderna, are set to come on stream within the next few weeks, meaning the campaign could be expanded to over-45s before May. 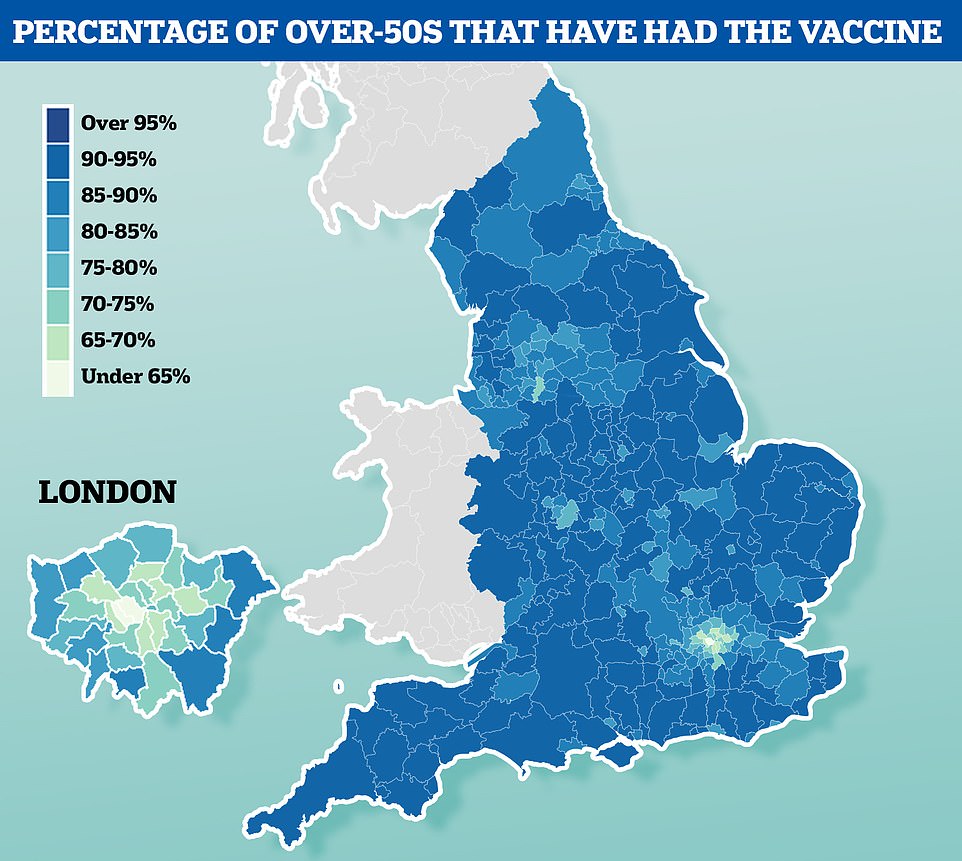 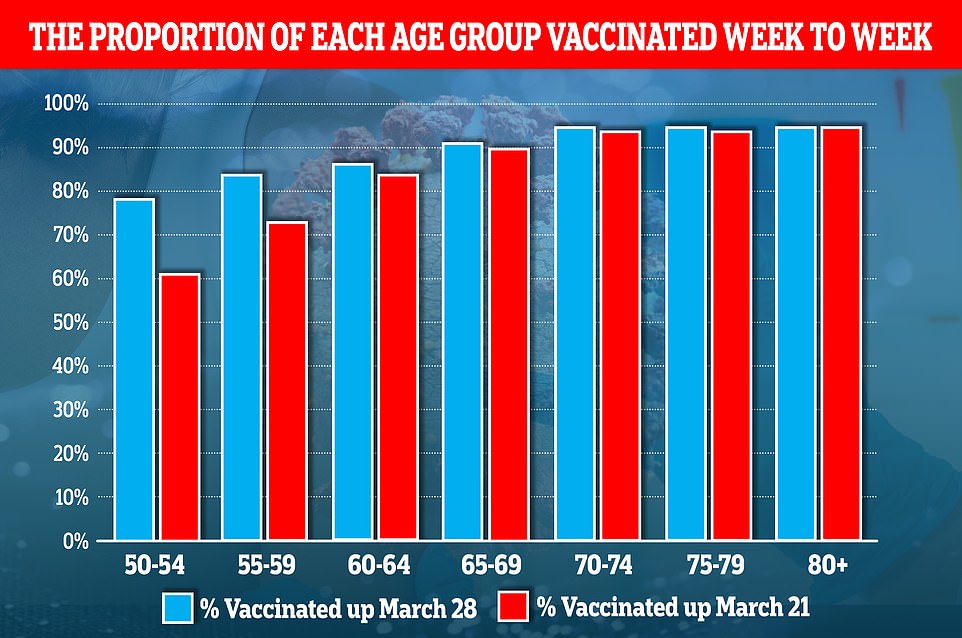 For the first time, this week’s NHS vaccination figures also showed the uptake rate in under-65s who are classified as vulnerable or carers and therefore eligible for a priority jab.

London was again far behind the rest of the country, with only 66.8 per cent taking up the offer of a jab, compared to an average of 76.9 per cent across the country.

MailOnline’s analysis shows the nation is deeply divided in terms of how well received the vaccine has been.

Nine areas of the capital have seen fewer than 70 per cent of their over-50s accept the invitation to book a jab appointment.

None of the areas increased their uptake by more than five per cent in the latest week, with the lowest increases seen in Kensington and Chelsea, where just 1.81 per cent more over-50s came forward for a jab.

Meanwhile the Government’s push to mop up all over-50s is faring far better in the rest of the country. Some 163 out of the 314 areas of the country reviewed now have uptake rates of more than 90 per cent.

After Mid Suffolk, Tewkesbury in Gloucestershire has the best uptake with 94.3 per cent. It was followed by Hambleton in Yorkshire, the Isles of Scilly, South Norfolk and East Devon (all 93.8 per cent).

Meanwhile, the data also showed just 77.8 per cent of care home workers have taken up the offer of the vaccine. Just 66.2 per cent of carers in London have been jabbed — an increase of just 1.7 per cent on the previous week.

Uptake among the group — who work with the most vulnerable people in society — is lowest in Barnet in north London (45.6 per cent), Barnsley in south Yorkshire (58.5 per cent) and Bath and North East Somerset (58.6 per cent).

The boss of the NHS yesterday urged all the remaining over-50s and younger people with health conditions who have yet to get their Covid vaccine to book an appointment now. 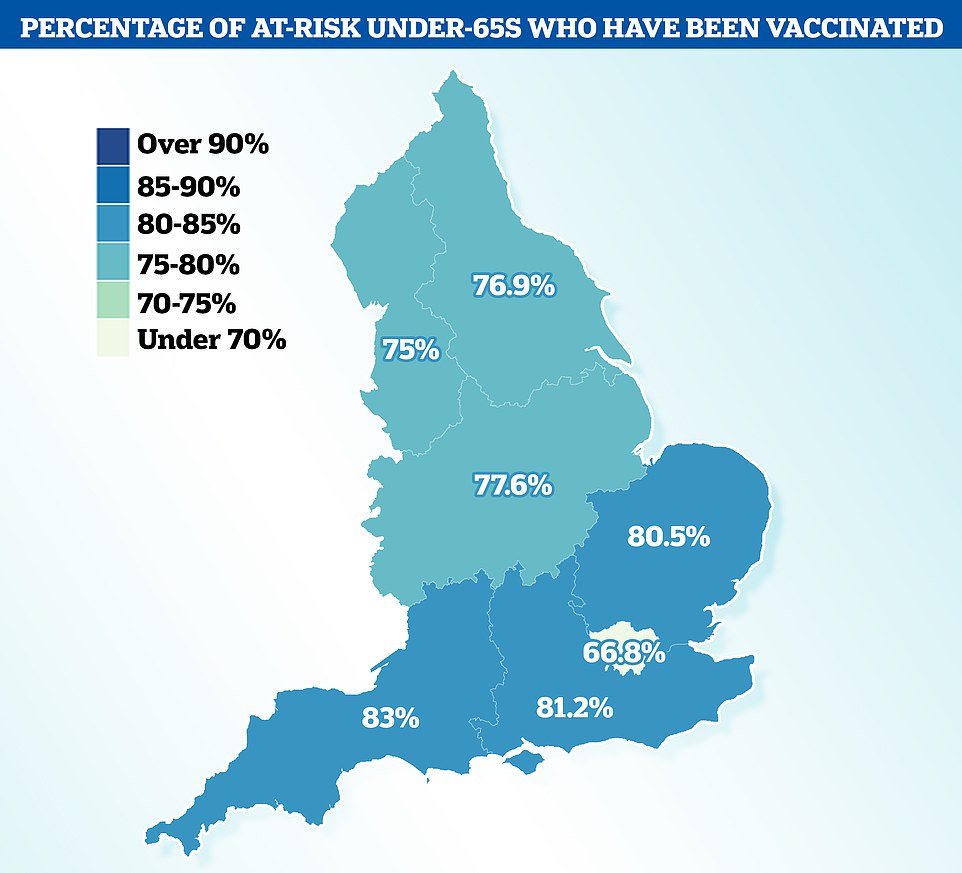 For the first time, today’s figures also showed the uptake rate in under-65s who are classified as vulnerable or carers 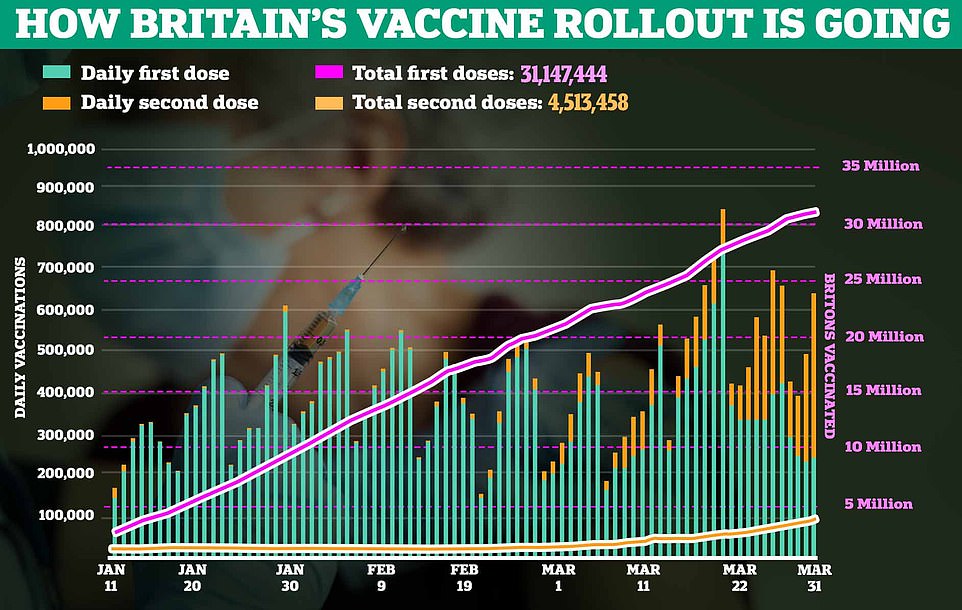 During April the NHS will focus on second doses but first-dose appointments for all over-50s not yet protected will also be available. Officials are not expected to extend the rollout to people in their 40s because of a supply shortage.

The most up-to-date NHS England data showed that at least 4million vulnerable people were still yet to get jabbed across the nation.

NHS chief executive Sir Simon Stevens said: ‘We’re well on track to meet our April 15 goal of offering NHS Covid vaccination to everyone aged 50 and over, as well as other high risk groups.

‘In just the past two weeks, we’ve now jabbed nearly 85 per cent of people aged 50-54, and over three million of the highest risk people have also now had their top-up second dose.’

NHS medical director, Professor Stephen Powis, added: ‘Our fantastic staff, helped by local organisations and volunteers, have done everything in their power to jab millions of people at speed – an incredible achievement.

‘As we start to see signs of normal life returning – seeing family or friends outdoors – protecting those most at risk is even more important.

‘So, if you have not been jabbed and are eligible, please do book in – staff are working hard to protect as many as possible, as supply allows.

‘I had my jab a few weeks ago – it is easy, quick and effective.’ 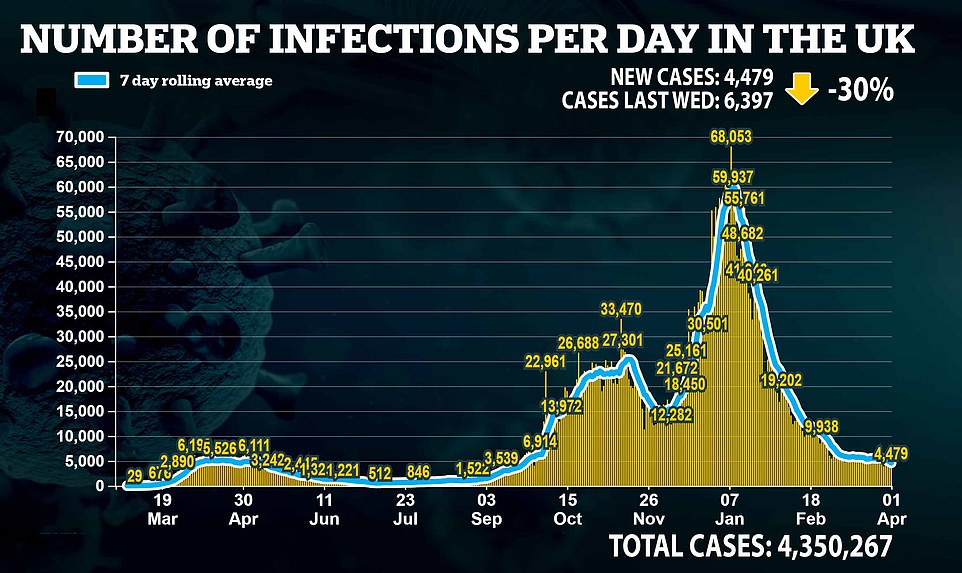 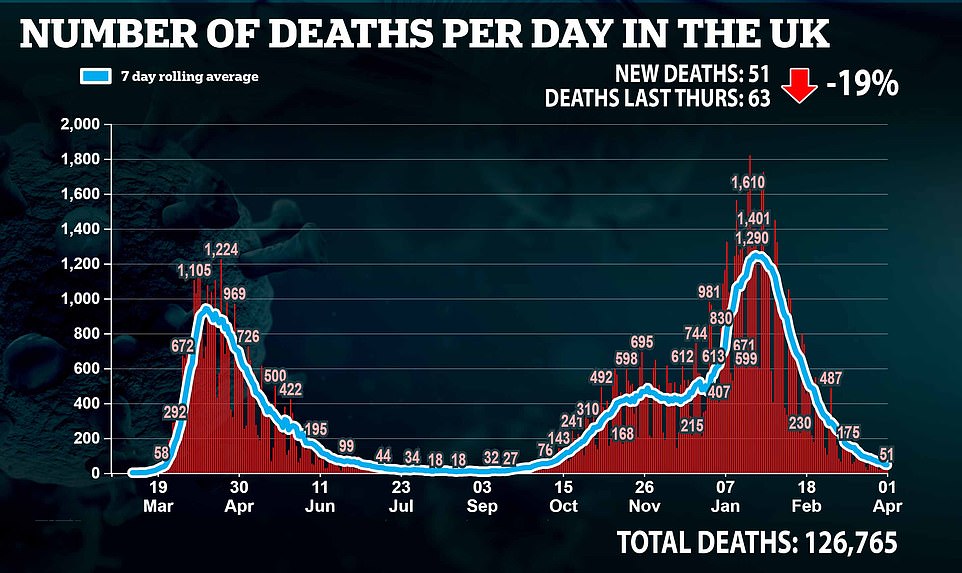