Bottoms up! Hilarious moment three revellers tip over pub bench when they all sit on the same side

Three revellers clearly did not think through their seating arrangement as they sent  a pub bench toppling down on top of them when they all sat on the same side.

Three regular pubgoers found themselves in trouble while they tried to enjoy a relaxing pint at DeBruns at Humes Bar in Portlaoise, Ireland.

Hilarious CCTV footage, which was shared to Facebook last week, shows the three friends being sent flying after they all weighed down one side of the bench.

The clip begins with two men sitting together and enjoying their pints on the same corner of a large wooden table outside the pub. 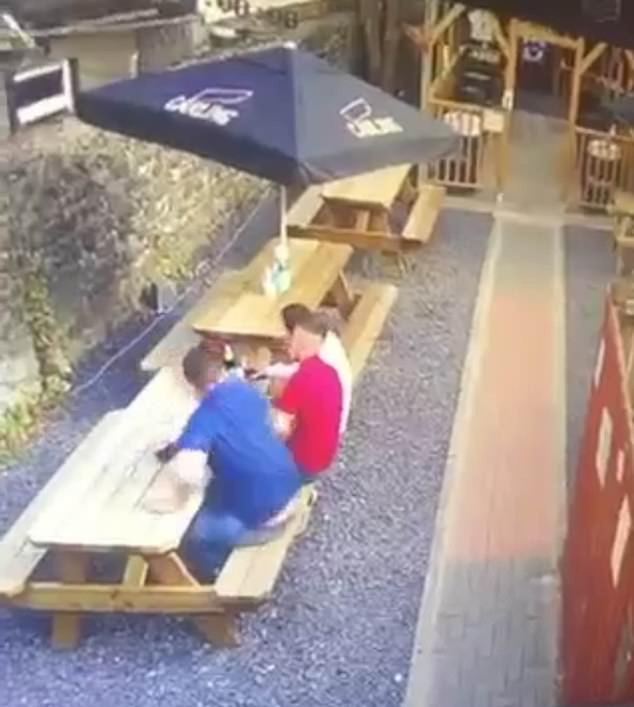 Three regular pubgoers (pictured) found themselves in trouble while they tried to enjoy a relaxing pint at DeBruns at Humes Bar in Portlaoise, Ireland 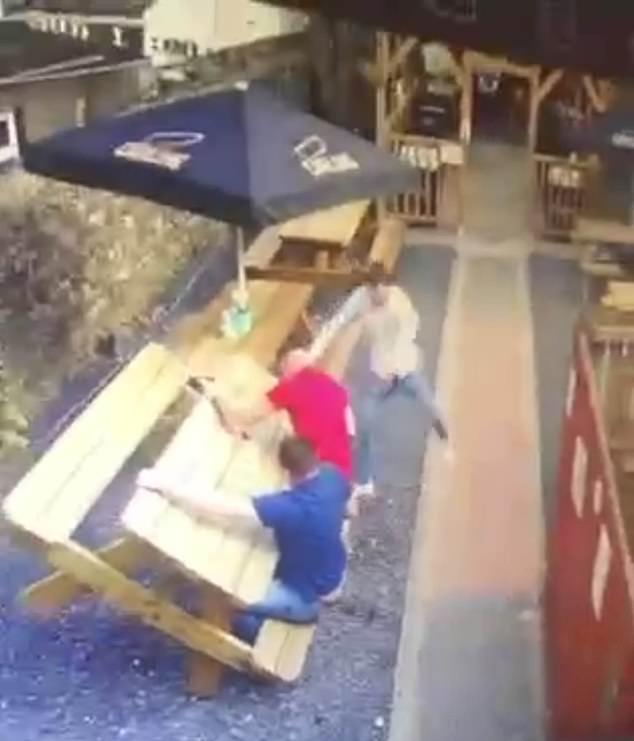 Hilarious CCTV footage, which was shared to Facebook last week, shows the three friends being sent flying after they all weighed down one side of the bench

But a third man places his pint down on the table and joins his friends, bizarrely opting to sit on the same side of the bench – despite the other side being completely empty.

Their pub outing quickly turns to disaster as the bench quickly starts to tilt backwards due to the weight, causing the drinks to spill all over the punters.

One of the revellers leaps off the falling table, but as he takes his weight off the bench, the precarious table topples over even quicker and his two friends are left lying on the floor stuck underneath the table.

The friends can be seen in fits of laughter as the lucky man who avoided the chaos returns to turn the table back over and rescue his friends.

The men get back up to their feet and the appear to be unharmed following the chaos, with the only casualty being their spilt pints.

The unfortunate incident, which took place on August 29, was caught on CCTV and pub owner Stapo Brown filmed the footage on his phone as bar manager Emma Boyce howled with laughter.

Speaking on Friday, Mr Brown said: ‘We couldn’t stop laughing. It was hilarious.

‘The lads who were in the video are regulars of ours so it made it even funnier. 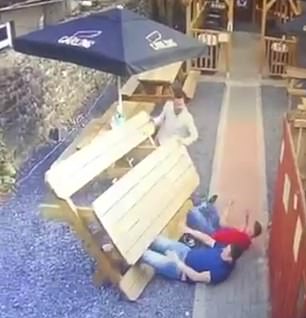 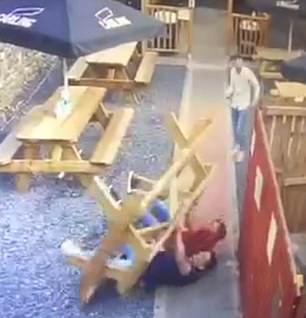 The three friends bizarrely sat on the same side of a pub bench and footage shows chaos ensuing as the bench topples over, sending them and their pints flying to the floor

‘When we first watched the CCTV we couldn’t breathe, we were laughing that much.

‘It’s great to see the reaction the video got, the lads in the video are loving their claim to fame’.

The video was shared to Facebook last week, where it has racked up more than 2.1million views, with the caption: ‘The lads in bits laughing is the best!’

James Bentley added: ‘I’m so confused on why you would want to sit all on the same side.’

While Ciaran Edelsten wrote: ‘The stupidity of not going to the other side tells you they deserved that.’

And Gareth Harding penned: ‘And not one of them saved their beer… They should be ashamed.’