Knife Crime Britain: Thug let off 21 times for carrying a knife, and one arrested for 17 separate assaults on police – and only sent to prison for the 18th

Criminals are being spared jail despite committing dozens of offences involving violence or weapons, according to shock new figures.

One dangerous offender was convicted 21 times for possession of a knife without being sent to prison. Another committed 33 assaults before being jailed for his 34th.

The disturbing examples of ‘soft justice’ come amid fears that the approach is fuelling Britain’s epidemic of violence and knife crime. 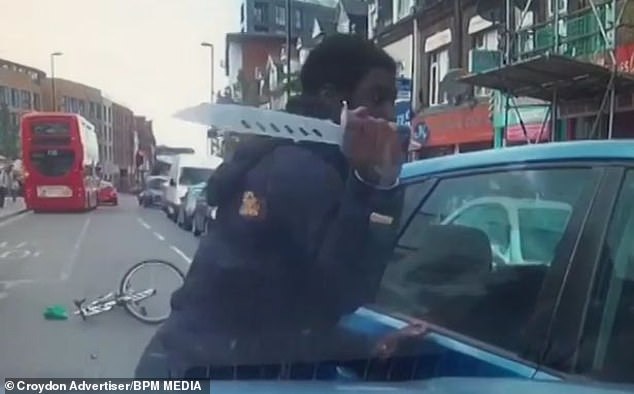 There was fury when Joshua Gardner,18, was spared jail for this terrifying attack trying to smash his way into a car with a zombie knife. Three months earlier Gardner had received a community sentence for attempted robbery. He was eventually jailed for the knife attack after an outcry

Last night, a senior police representative said the figures showed criminals were ‘laughing at the justice system’. Other critics predicted that the scandal would only worsen under Government plans to axe short jail sentences.

The statistics were published by the Ministry of Justice last week in response to questions by Tory backbench MP Philip Davies. He asked ‘what the highest number of total previous offences’ was for a range of offences committed by individuals before they were given immediate custodial sentences across England and Wales in the past three years.

One thug had acquired 17 convictions for assaulting police officers before finally being jailed last year for an 18th.

Career criminals with 15 previous cautions and convictions for burglary and robbery were eventually jailed after reoffending in 2018, and a sex predator accumulated eight previous convictions for sexual assault before a jail term. 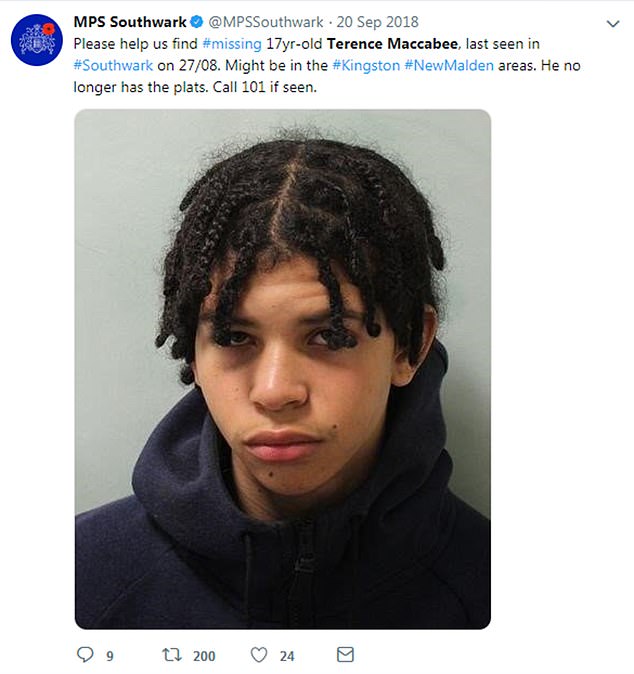 Terence Maccabee, 18, got a suspended sentence after he was caught with a huge machete at a railway station. He has a previous conviction for threatening behaviour and a drugs caution

Another offender committed 30 drug crimes before his 31st saw him put away, while a fraudster was convicted of 53 separate scams before finally being imprisoned for yet another.

Mr Davies said: ‘This lays bare how soft our justice system is, and how criminals can carry on committing crimes with impunity. It also shows how idiotic the Government proposals are to abolish short sentences. These figures show we don’t send enough people to prison.’

And John Apter, chairman of the Police Federation ‘union’ for frontline officers, said: ‘A non-custodial route takes the pressure off a prison system which is struggling to cope. But all that means is that these people are laughing at the judicial system. There are too many slaps on the wrist and not enough adequate justice. For some, the only answer is to be locked up.

‘Inappropriate sentences help to fuel further drug, knife and gun crime. For officers – working against a backdrop of severe cuts in numbers and a dire lack of funding across the service – all it does is make their jobs harder.’

Prisons Minister Rory Stewart said last night: ‘We are clear that sentencing must match the severity of a crime. However, sentences should also rehabilitate. There is persuasive evidence showing community sentences, in certain circumstances, are more effective than short custodial sentences in reducing reoffending.’

Deadly ‘Rambo’ hunting knives have been taken off sale after the MoS revealed they are the weapon of choice for street gangs.

Dozens of the 10in blades have been found by police in recent months and they have been linked to stabbings, muggings and teenage drug dealers.

But now the main wholesaler for the knife, Anglo Arms, has agreed to stop supplying them to stores.

Owner Eddy Eliaz said: ‘We’ve discontinued it and won’t be selling it any more. It is just not worth it.

‘We’ve been selling that knife for 20 years but for some reason in the past year it has really caused an issue. I think it proves it is not the knife, but the current climate.’

Anglo Arms, based in a Hertfordshire industrial estate, has taken down its website and many online stockists have already stopped selling the £9.99 knife, which has distinctive slots in the blade to make it lighter.

Recently West Midlands police discovered a Rambo knife hidden inside a bag along with a loaded gun; and in North London officers found one on a youth suspected of robbing an elderly man.

Prince Harry and Meghan Markle announced their departure from the Royal Family’s working ranks last year. The Duke and Duchess voiced their wish for privacy…

Zara Tindall, the Queen’s granddaughter, was expected to have been a source of support for her cousin, Prince Harry, and his wife, Meghan Markle, in…