TikTok is used by foreign states including China to sway minds of children and hurt British democracy, security minister says

TikTok and other apps powered by algorithms engineered by foreign states are a ‘challenge’ for British democracy, the security minister said yesterday.

Tom Tugendhat said Chinese-owned TikTok can ‘influence’ young minds and could present a long-term threat that might ‘degrade our sovereignty’.

Parliament’s official TikTok account was shut down after MPs raised concerns over user data being sent to China.

Mr Tugendhat, who has himself been sanctioned by Beijing, said in a speech to the Policy Exchange think-tank: ‘For too long foreign interference has been slowly creeping into British democracy. 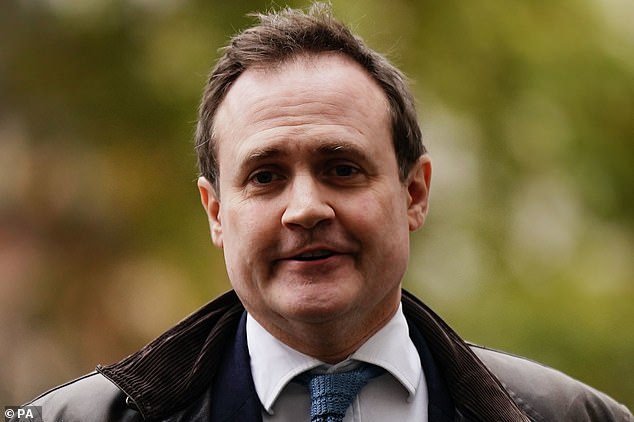 ‘But it’s the strategic threats to our democracy because the acts are part of a systemic campaign over a long period of time to degrade our sovereignty that concern me most.’

He warned that the nation’s adversaries – including China, Russia and Iran – could challenge Western democracy through technology.

Mr Tugendhat also raised the alarm about the growing number of young people who rely on TikTok and other social media sites as their main source of information.

While the reach of traditional media has fallen significantly, he said, young people are engaging with sites ruled by algorithms programmed by foreign states, which shape what they are exposed to.

He claimed that a third of first time voters will be getting news from organisations ‘comprised of members of the Chinese Communist Party or algorithms we can’t interrogate or check’.

‘The contents on these platforms will influence minds,’ he said. ‘Yet it’s worth noting that foreign states hold considerable sway over the algorithms that are the editor on these sources.

‘The reality is editorial control is exercised by algorithms that are programmed by individuals.

‘The idea that these are some neutral actors scientifically controlled editorial decisions, they’re not, they’re chosen.’

He also said that Britain’s resilience was under threat because of a lack of pension fund investment in the stock market.

He blamed the lack of capital available to invest in companies for the sales of UK chip designer Arm and AI business Deep Mind to foreign owners, which he described as ‘the two worst strategic decisions in the UK’s recent past’.

The minister said: ‘Resilience isn’t just about the way in which we shape our own future in democratic terms, it’s also our ability to build it in economic terms.’

A TikTok spokesman said: ‘TikTok is an independent platform, with a global leadership team. ‘We are open about how our recommendation system works, and publish regular transparency reports which demonstrate our content moderation in practice.

‘We’re working to provide researchers, academics and civil society even more access to data about content and activity on our platform.’