‘It’s safe if you know what you’re doing’: Defiant tombstoner, 21, defends his hobby after being accused of recklessness as video shows bricklayer jumping 70ft off a rock and plummeting into the sea

This is the hair-raising moment a young ‘tombstoner’ leapt from a high cliff into the sea, prompting a wave of criticism.

Aaron Thomas, 21, says he has five years experience of jumping from terrifying heights near his seaside home on the Isle of Portland, Dorset.

The thrill-seeker posted a nail-biting video of himself leaping off a cliff near Pulpit Rock on social media.

In it, he is seen taking a running jump from the 70ft high ledge and plummeting into the water just metres from a huge semi-submerged rock.

Tombstoning is the activity of jumping from a high cliff or ledge while maintaining a vertical, upright position. 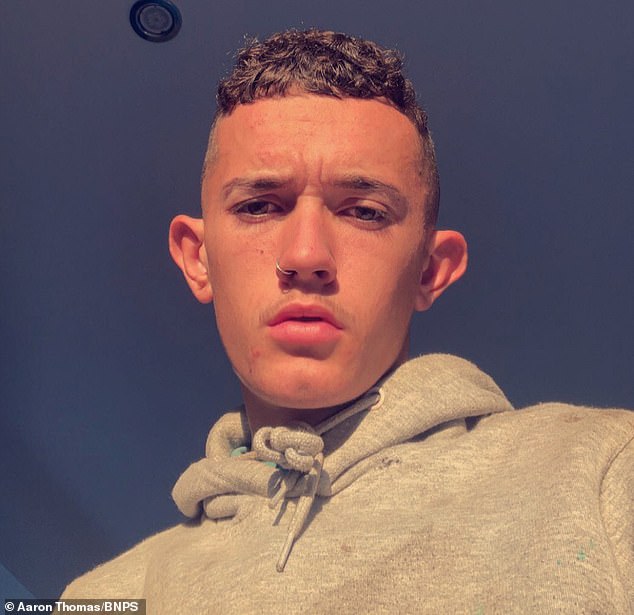 Aaron Thomas, 21, has five years experience of jumping from terrifying heights near his seaside home on the Isle of Portland, Dorset 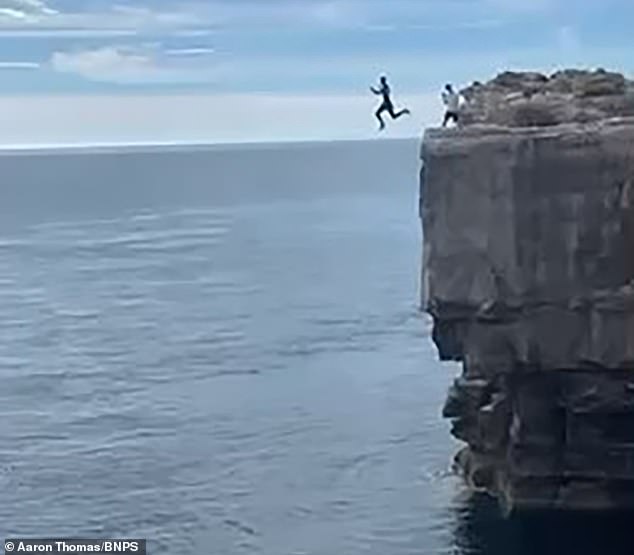 Viewers on social media condemned him for his recklessness, as one woman said she knew a tombstoner who was left wheelchair-bound when a jump went wrong.

Katrina Gall warned: ‘I went to school with an experienced swimmer and jumper – he’s in a wheelchair for life after misjudging the rocks… Only takes once, then no going back’.

But self-employed bricklayer Mr Thomas brushed off the complaints, saying it is ‘safe if you know what you’re doing’.

Mr Thomas insisted he was following in the footsteps of his father Dave Thomas, 40, who has tombstoned all his life.

He said: ‘I’ve had loads of people moaning about it but if you know what you’re doing, it’s fine. 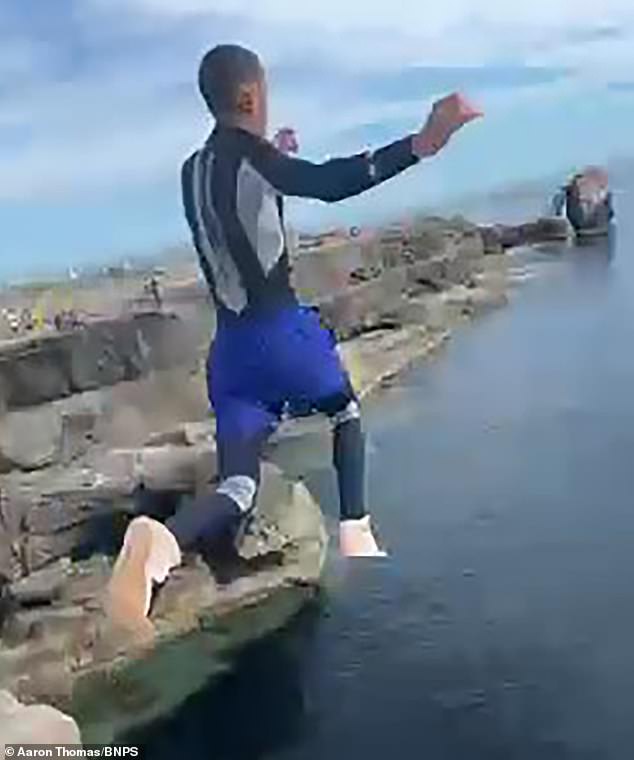 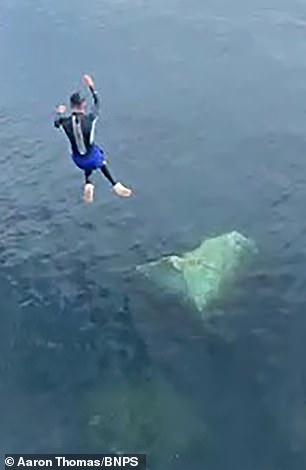 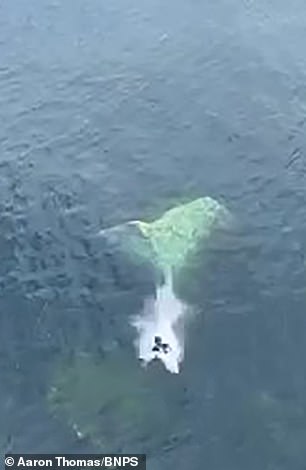 Mr Thomas is seen falling close to the semi-submerged rock in the sea. He misses the rock by only a short distance, instead plunging into the water 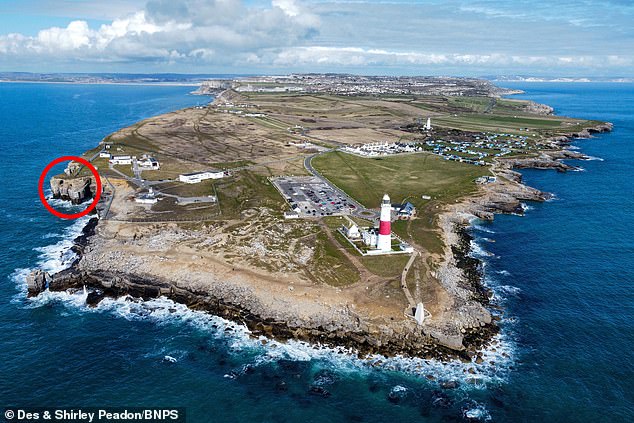 ‘The Stacks’ (circled) on the Isle of Portland, Dorset (pictured) where Mr Thomas’s filmed himself tombstoning

‘My dad has been doing it his entire life – he’s never hurt himself. He’s 40 now and he still loves it.

‘I find it’s a lot of older people moaning and saying it’s dangerous – they mentioned that you can’t see the rocks.

‘But we snorkle there first and do a depth check. We make sure we jump at high tide – there’s only one rock there and if that’s beneath the water we know the tide is high enough.

‘Someone commented and said that now all the teenagers would copy me – I did have one person tag their partner and say, “omg we need to do this”.  I don’t even think they were from Portland either so that is worrying.

‘They just need to make sure they go out with someone who knows what they’re doing’.

He added that he’d ‘have to deal with it’ if he ever got hurt.

In response, the National Coastwatch Institution at Portland Bill warned that tombstoning was ‘very dangerous’ and jumpers risked being swept away in strong currents.

‘The tide running around Portland Bill can exceed four knots depending on the time of day, and any tombstoner is liable to getting swept away by the tide.

‘It is one of our worries – the shoreline is very dangerous and jumpers need to be wary of it.’

On Saturday, it was reported a young man who ‘tombstoned’ from a sea stack in Devon sparked a coastguard rescue incident after plummeting into the water from the jagged cliff and injuring his leg.

Several emergency services teams were sent out to Imperial Hotel by the Peaked Tor Cove beach in Torquay on Saturday at around 3.30pm after a man sustained leg injuries from jumping in the sea from a height.

At around 2pm, a group of 12 teenagers were filmed jumping one after another from the vertical rock column.

The clip shows a large group of youngsters standing on the edge of the cliff before plummeting below. Several emergency services teams were sent out to Peaked Tor Cove beach in Torquay on Saturday at around 3.30pm after a man sustained leg injuries from jumping in the sea from a height. Less than two hours later, teenagers were filmed (pictured) tombstoning

A witness who took the video, told DevonLive: ‘It looked very dangerous. The noise when they hit the water was very loud. And some of them looked very close to the rocks on the way down.’

A Maritime and Coastguard Agency spokesperson said of the incident: ‘At approximately 3.30pm today, HM Coastguard’s Torbay and Berryhead Coastguard Rescue Teams, Torbay RNLI lifeboat, South West Ambulance Service, and HART were sent to assist a casualty with a suspected leg injury on the coast of Torquay.

‘The casualty was brought from a less accessible part of the beach by the lifeboat and passed into the care of the ambulance service.’

Elsewhere, a woman was left wheelchair-bound for months after tombstoning from 50ft high Devil’s Bridge in Kirkby Lonsdale, Cumbria, into the River Lune last July.

Libbey Sinden, 22, ‘burst’ her spine on impact, had to learn to walk again and was in a wheelchair for four months afterwards. In only her swimwear she ‘nervously’ peered down before the major fall and said hitting the water was ‘like hitting a brick wall’.

Ms Sinden, from Preston, Lancashire had her fall captured on video where she also appears to struggle in the water calling out: ‘I hurt my back’.

They healthcare worker then dragged herself to the edge of the water where she could do nothing but lie down in pain for three and a half hours while the fire service, an ambulance and mountain rescue were called to help her.

She was rushed off for a six-hour operation on her spine at Preston Royal Hospital.

Ms Sinden now begs others not to copy her as she warns of the dangers that jumping off bridges and cliffs into water could ‘change their entire life’.