A former Conservative minister who quit after sending 2,000 texts to a barmaid and her friend about ‘violent sex acts’ also raped and physically abused his wife, a judge has found.

The judge is overseeing an ongoing family court dispute between Mr Griffiths and his ex-wife Kate Griffiths centred on a child.

Ms Griffiths raised concern about the amount of contact Mr Griffiths should have with their child – and made a series of allegations about the way he had treated her when they were married.

She said that he raped her in her sleep and put his hands on her throat during their relationship. She has not made a complaint to police.

Mr Griffiths, who was replaced by his wife as the MP for Burton and also used to be the minister for small business and once worked as Theresa May’s chief of staff, resigned in July 2018 after a Sunday newspaper reported that he had sent ‘depraved’ messages to two women constituents.

He was said to have bombarded a 28-year-old barmaid and her friend with lewd comments over social media during a three-week period. 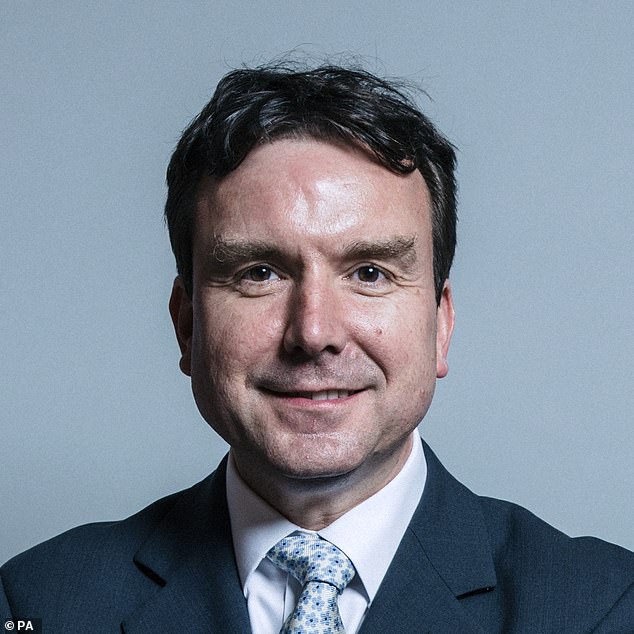 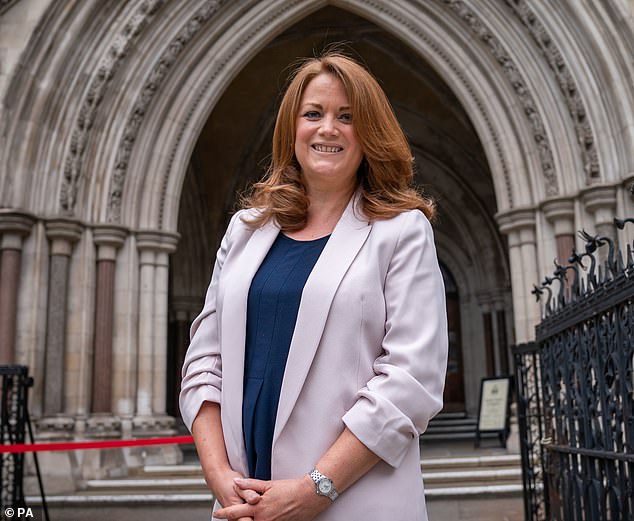 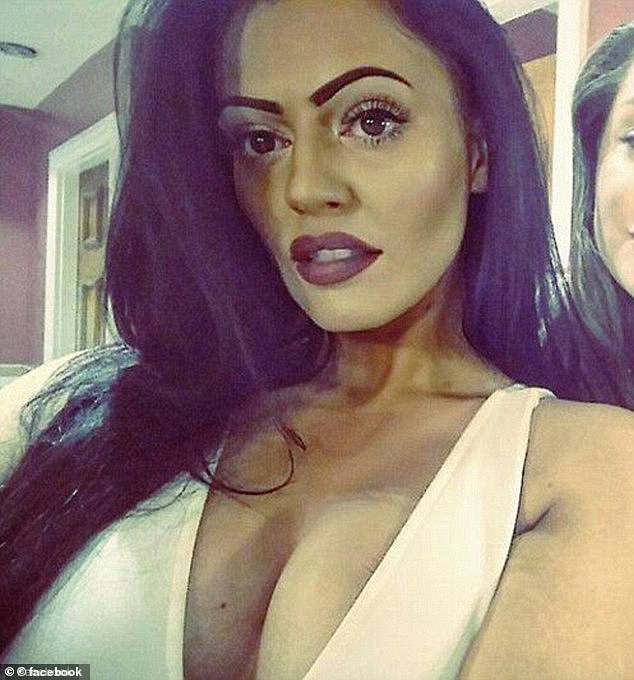 Mr Griffiths sent the string of messages to barmaid Imogen Treharne, 28, (pictured) and her friend whom he paid £700 and offered to rent out a flat for ‘something filthy’

When Griffiths sent the string of messages to barmaid Imogen Treharne, 28, and her friend, Ms Griffiths had just given birth to the couple’s first child.

He also gave the pair £700 to and offered to rent out a flat so that they could hook up while demanding they send him something ‘f****** filthy’.

Describing himself as ‘evil’, he detailed degrading sex acts and demanded explicit pictures and videos.

He even said he’d rather be ‘licking naughty girls’ instead of ‘running the country’.

In the case of his wife, judge Williscroft made findings, on the balance of probabilities, against Mr Griffiths, in November 2020. The findings were initially kept private but have now been made public.

The judge had been overseeing a dispute between Mr and Ms Griffiths, who are now divorced, centred on a child at private family court hearings in Derby.

The judge heard that the Griffiths married in 2013 after forming a relationship about five years earlier.

She heard that Mr Griffiths became an MP in 2010 and was a minister between January and July 2018.

Ms Griffiths became an MP in 2019. Judge Williscroft said she was sure that they had been a ‘glamourous couple’.

In 2010, Ms Griffiths found out that Mr Griffiths had been having a ‘long affair’, the judge said in a ruling.

The woman he was involved with had appeared at the 2010 Conservative Party Conference.

He had accepted threatening the woman that ‘he would go to the press if she spoke to his wife’. Ms Griffiths also discovered that Mr Griffiths had been sending ‘sexual texts’ to ‘someone else’ in 2011.

Judge Williscroft said Mr Griffiths ‘described how he had engaged in what he described as sexually risky behaviour for many years, as he enjoyed it’.

He told the judge that he had been ‘addicted to pornography’.

The couple separated after Mr Griffiths was ‘exposed’ as having sent ‘kinky and depraved … sexual text messages’ to two women constituents in July 2018.

Judge Williscroft concluded that Mr Griffiths’ ‘own needs’ took ‘precedence’ during the marriage. 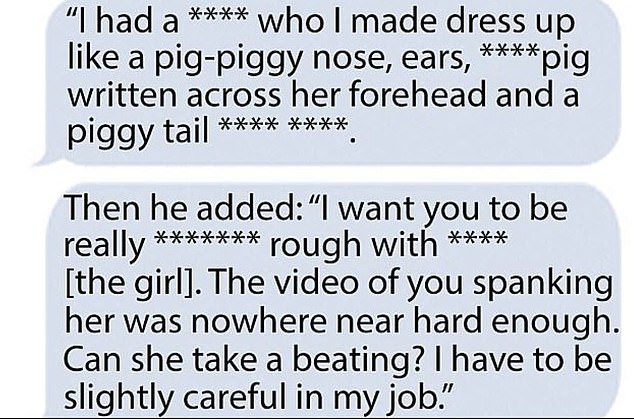 When Griffiths sent the string of messages to barmaid Imogen Treharne, 28, and her friend, Ms Griffiths had just given birth to the couple’s first child

Describing himself as ‘evil’, he detailed degrading sex acts and demanded explicit pictures and videos from the barmaid

He had accused Ms Griffiths of ‘being frigid’ in order to persuade her to ‘give in to his sexual demands’.

The judge said it seemed to her that it had ‘never crossed Andrew Griffiths’ mind’ that Ms Griffiths would not do what he liked her to do. She said Mr Griffiths had ‘undermined’ Ms Griffiths’ ‘self-esteem’.

He accepted that he had called Ms Griffiths ‘fat and lazy’. The judge said Ms Griffiths had ‘proved in her oral evidence to me’ that Mr Griffiths ‘did rape her when sexual intercourse took place’.

She said Ms Griffiths’ allegations had been ‘confirmed’ by Mr Griffiths’ ‘responses’.

‘Andrew Griffiths adamantly denied these allegations saying he had never had any form of sexual contact that was not consensual,’ said Judge Williscroft. ‘I could not accept there was sexual ‘give and take’ in their relationship.’

Ms Griffiths said rapes had begun while she was asleep.

Judge Williscroft said: ‘I accept that Kate Griffiths proved in her oral evidence to me and I find confirmed by Andrew Griffiths’ responses that he did rape her when sexual intercourse took place when he had already penetrated her when she was asleep.’

Ms Griffiths, who gave evidence behind a screen at court hearings so she could not see Mr Griffiths, had also given accounts of ‘physical abuse’.

The judge said she found those accounts ‘proved’.

She alleged that during an argument he knelt on her and put his hands on her throat, trying to strangle her. Mr Griffiths said no assault had taken place.

Judge Williscroft said she ‘preferred’ Ms Griffiths’ account. The judge found that Mr Griffiths had pushed Mrs Griffiths when she was heavily pregnant.

She said there had been an argument about Mr Griffiths’ ‘continued wish’ that Ms Griffiths should move to London with him.

Mr Griffiths had ‘wanted to be able to have family time in London ‘like David Cameron”, the judge said. Judge Williscroft said there had been an incident in a hotel where Mr Griffiths had thrown a passport and money at Ms Griffiths, pushed her on to a bed and told her to ‘f*** off home’. 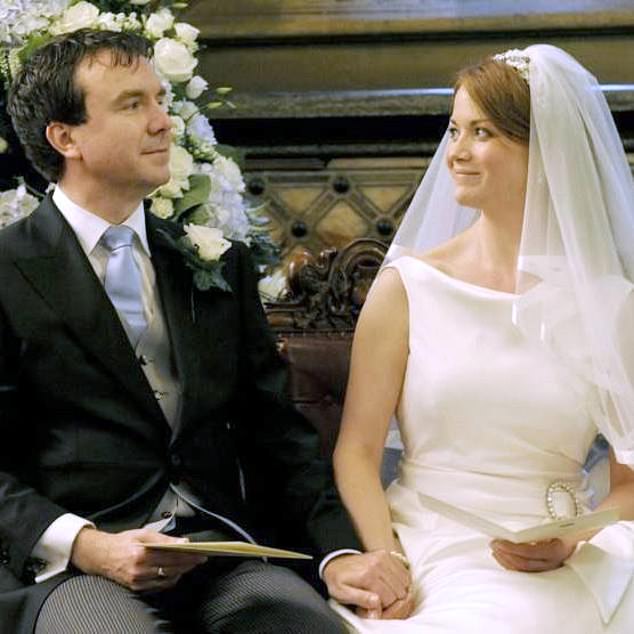 In the case of his wife, judge Williscroft made findings, on the balance of probabilities, against Mr Griffiths, in November 2020 (couple pictured on their wedding day in 2013) 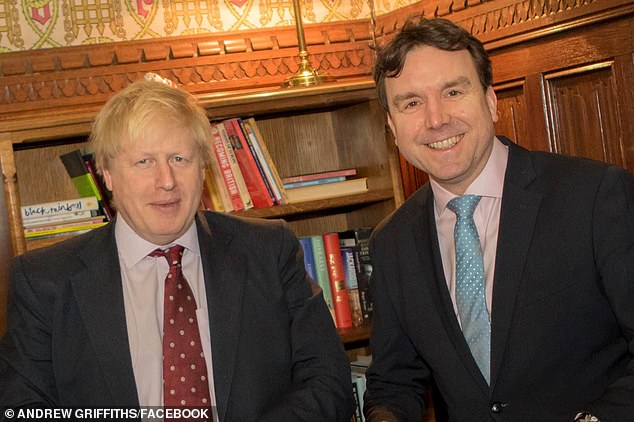 The judge described a ‘frightening loss of control’ and said his ‘excessive response’ was ‘worrying’.

Mr Griffiths had accepted being ‘abusive’ to Ms Griffiths verbally and ‘hurt her when drunk’.

Initially, the judge decided the findings should not be made public, in order to protect the child at the centre of the case.

A more senior High Court judge then ruled that Judge Williscroft’s findings should be revealed and Mr and Ms Griffiths named, after two journalists learned about the case and argued that the public had a right to know.

Judge Williscroft had asked Mrs Justice Lieven, who is based in the Family Division of the High Court, to consider arguments about publicity.

Mrs Justice Lieven heard the journalists’ application to be allowed to report Judge Williscroft’s findings, and name Mr and Ms Griffiths, at a private hearing in London, and ruled in their favour.

Three appeal judges on Friday dismissed his appeal and findings made by Judge Williscroft, and Mrs Justice Lieven, could be made public.

Ms Griffiths had backed the journalists’ fight for publication and agreed to be named in media reports – even though victims of sexual abuse have a legal right to anonymity. Mr Griffiths was against publication.

He argued that revealing Judge Williscroft’s findings, and publishing his name and Ms Griffiths’ name, would harm the child at the centre of the case and harm his relationship with the child.

Mrs Justice Lieven ruled against Mr Griffiths. But she said the child at the centre of the case could not be named in media reports.

‘(Judge Williscroft) found that the father had been physically abusive to the mother on more than one occasion,’ said Mrs Justice Lieven in a written ruling on the publicity arguments.

‘The judge found that the father had used coercive and controlling behaviour, including to pressurise the mother to engage in sexual activity.

‘The judge found that the father raped the mother… on more than one occasion.’

Mrs Justice Lieven said she had balanced the media’s right to free speech against rights to respect for family and private life.

She said she had carried out an ‘intensive and fact-specific investigation’ and concluded that Judge Williscroft’s findings should be made public.

‘I accept that, on the specific facts of this case, there is considerable and legitimate public interest in the publication of the judgment including the parties being identified,’ said Mrs Justice Lieven.

‘The father was in a prominent and powerful position in the UK.

‘Importantly, his role as an MP and a minister meant that he had a role in law-making, including in respect of issues concerning domestic abuse.

‘The mere fact that he was an MP, let alone a minister, means that there is a strong public interest in the public knowing about a finding by a judge of the conduct of the nature of that set out in the judgment.

‘The democratic system relies upon the media being able to publish information about elected representatives, particularly where the information comes from findings in a court judgment.’

Charlotte Proudman, a barrister representing Ms Griffiths, had told Mrs Justice Lieven that another woman had previously made a harassment complaint about Mr Griffiths to police.

Reacting today, Ms Griffiths said: ‘I welcome this decision as a positive step forward in a legal battle that has taken a huge emotional and financial toll on my family.

‘I supported publication of the Family Court’s findings – and waived my right to anonymity – because I recognise the unique position I am in to campaign to improve the outcomes of cases such as this, for those who endure domestic violence, and the actions taken to protect the children involved.

‘When I stood for election as Member of Parliament for Burton and Uttoxeter, I promised I would be a voice for those who have been victims of domestic abuse.

‘I am committed to working with colleagues across Parliament to improve both the support available to – and the outcomes for – those who have been through similar experiences to me.’