A Melbourne tow truck driver tested positive for methylamphetamine after colliding with a cyclist in a fatal crash in the city’s inner-north, a court has been told.

Police allege the tow truck driver, who works for Brunswick-based company All Suburbs Towing, was taking a car to a local panel shop about 1pm and following directions on his phone.

They alleged Vrskovski went through a give way sign and turned right onto Melville Road at the intersection of Brearley Parade, before hitting the cyclist, a 43-year-old Brunswick West man.

The cyclist became stuck under the truck and was dragged several metres, according to court documents. He later died at the scene.

Police said the truck driver immediately stopped his vehicle and got out to assist the man, along with bystanders. They said the incident was captured on CCTV and on the truck’s dashcam.

Officers alleged in court documents that Vrskovski underwent a preliminary oral fluid test at the scene and returned a positive result for methylamphetamine.

He later refused a request to provide a blood sample. Police said Vrskovski denied using drugs and gave no explanation as to why he tested positive in the oral fluid test.

Vrskovski said he looked both ways before he went through the intersection and told police he did not see the cyclist.

The 48-year-old appeared in Melbourne Magistrates’ Court on Wednesday and was granted bail, which police opposed. 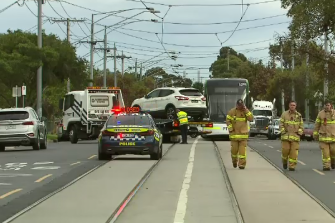 Emergency personnel attend the scene of a fatal collision at Pascoe Vale on April 12.Credit:Nine News

All Suburbs Towing refused to comment on the matter.

Moreland Mayor Mark Riley said the council was devastated to hear about the incident.

He said we would write to Victorian Minister for Roads and Road Safety Ben Carroll to “urge him to consider installing safety measures to protect bike users and pedestrians along Melville Road and new infrastructure on nearby corridors.

Vrskovski is due to next appear in court in August.