Whole towns could face ‘local lockdowns’ if they have a flare-up of coronavirus cases, Matt Hancock confirms

‘Local lockdowns’ could be imposed on whole towns if there are regional flare-ups of coronavirus cases in England, Matt Hancock confirmed today.

The Health Secretary said the ability to tighten restrictions in individual regions will be part of the NHS test, track and trace system – which is set to expand on June 1.

This could lead to local schools, businesses or workplaces being closed in areas with high prevalence of infection, according to the government’s road map on easing lockdown restrictions.

This could lead to local schools, businesses or workplaces being closed in areas with high prevalence of infection, according to the government’s road map on easing lockdown restrictions.

Mr Hancock told the daily Downing Street press briefing: ‘I know there’s been a specific problem in terms of flare ups and in terms of the number of cases, particularly in Barrow in Furness.

‘We will have local lockdowns in future where there are flare-ups and we have a system we are putting in place with a combination of Public Health England and the new Joint Biosecurity Centre, along with the local directors of public health who play an absolutely crucial role in the decision-making in the system, to make sure if there is a local flare-up there is a local lockdown.’

In other coronavirus news in the UK: 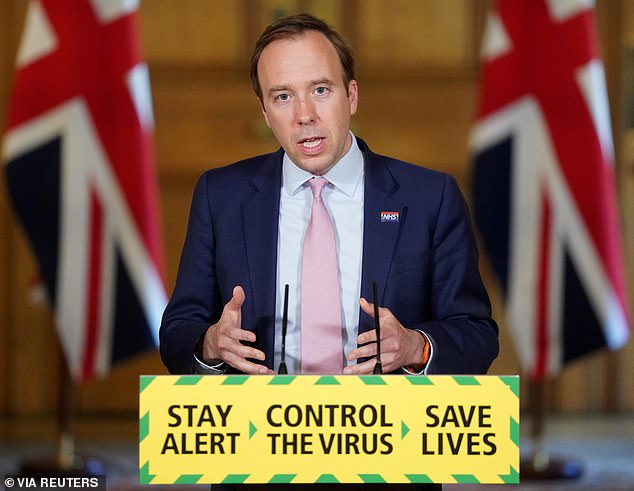 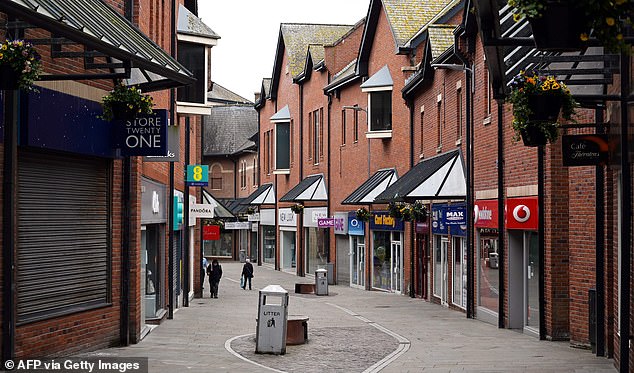 Barrow-in-Furness (with 831 confirmed cases per 100,000) has the highest figure both for England and the whole of the UK with Mr Hancock specifically mentioning the town today

Professor John Newton, the national testing coordinator also said that ‘local lockdowns’ could be implemented across the country.

He said: ‘Whatever measures we put in place have to work everywhere in the country.

‘Different areas will have their own different considerations, the Lake District is a very special place and it has a lot of visitors it has a lot of open space and its difficult to reach parts of it.

‘Other parts of the country have different challenges.’

Barrow-in-Furness (with 831 confirmed cases per 100,000) has the highest figure both for England and the whole of the UK.

Some regions may have done more testing than others, so they will have detected more cases.

It comes as Britain today announced 134 more victims of the coronavirus, taking the country’s total death toll to 37,048. 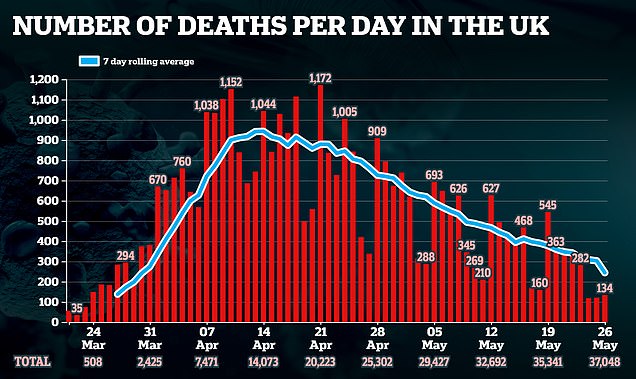 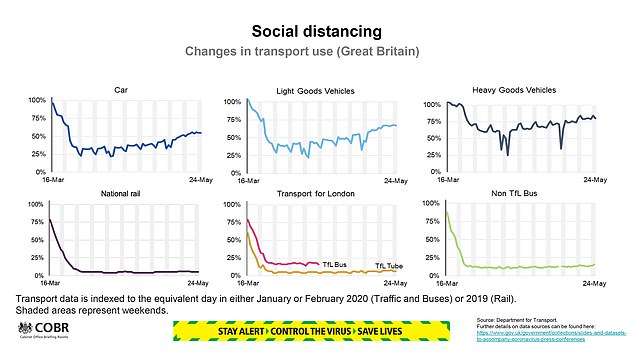 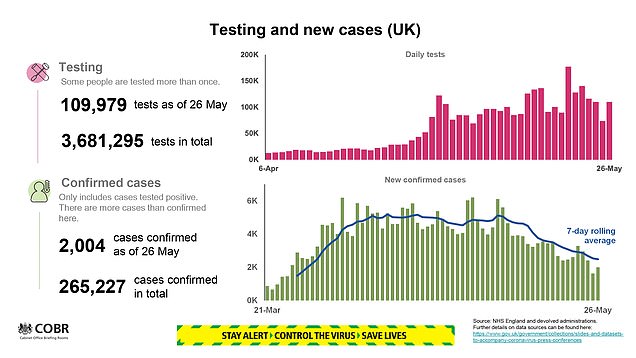 The Department of Health also confirmed that 2,004 more people have tested positive for the disease, meaning 265,227 have received a diagnosis since the outbreak began in February.

Today marks the first day since March that no coronavirus deaths have been announced in Northern Ireland. It had recorded one on Monday and one on Sunday, but the last time the figure was zero was March 23 – pre-lockdown.

Separate data today revealed fewer people died of coronavirus during the week between May 9 and May 15 in England and Wales than at any point over the past seven weeks.

Figures collated by the Office for National Statistics show the overall Covid-19 death toll in that week was 2,639 across the two nations, a drop of 1,235 from the week before. And the count is a fall of more than half from the peak of the outbreak – 8,180 people died from the coronavirus during the worst week, from April 11 to 17.

Matt Hancock also today called remdesivir the ‘biggest step forward’ in treating Covid-19 since the outbreak spiralled out of control, after the Ebola drug became the first medicine approved for coronavirus patients in Britain. 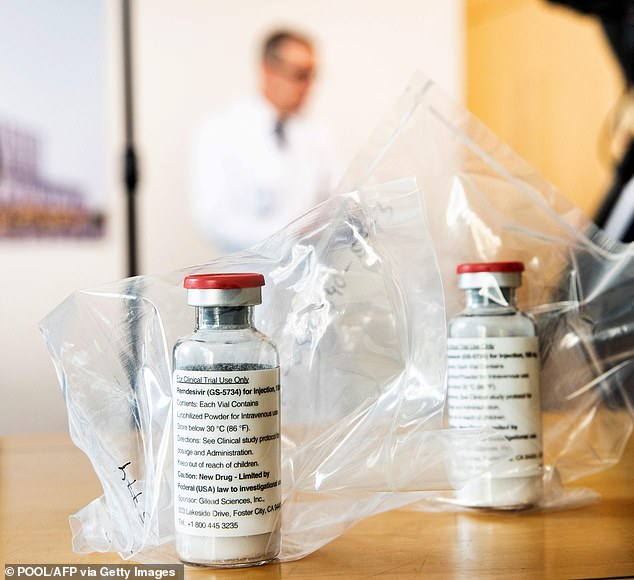 Remdesivir may be the closest thing doctors currently have to a cure for the coronavirus, after trials showed it can shave days off patients’ recovery times

The Health Secretary praised the drug, which must be injected by a trained medic, saying scientific studies have already shown promising results and suggest it may speed up people’s time to recovery by four days.

Announcing the approval of the drug in tonight’s Downing Street press conference, he said: ‘This is probably the biggest step forward in the treatment of coronavirus since the crisis begun.

WHAT TREATMENTS ARE AVAILABLE FOR COVID-19 PATIENTS?

Until today there were no drugs that had been approved specifically for the purpose of treating patients with COVID-19.

Doctors have been trying to save people with serious infections by giving them oxygen therapy – such as through masks, or ventilators for the most sick – and generic attempts to manage the infection.

This may include trying to calm down the immune system if it is over-reacting, treating the symptoms such as pain and difficulty breathing, and using antibiotics, antiviral or antifungal drugs to prevent secondary infections and to try and boost the immune system.

For many, it is a case of experimenting and hoping for the best.

‘These are early steps but we’re determined to support the science and back the projects that show promise. As you can understand, we’ll be prioritising the use of this treatment where it can provide the greatest benefit.’

Adults and teenagers battling severe bouts of Covid-19 will be allowed to get remdesivir if they fit specific criteria, officials announced this morning. Doctors are expected to decide on a case-by-case basis.

This makes the drug, which destroys a part of the SARS-CoV-2 virus to stop it reproducing, the closest thing NHS doctors have to a cure or treatment for the life-threatening disease.

Britain’s approval of remdesivir has come more than three weeks after the FDA in the US gave it the green light on May 1, putting the UK weeks behind once again. It was also slower to increase testing capacity.

Japan’s ministry of health also approved the drug – developed by drugs giant Gilead Sciences – on May 8. Britain is now following suit in the face of growing scientific evidence.

Remdesivir – considered the most promising out of a number of antivirals – is expected to be available immediately to critically-ill patients over the age of 12 across England, Wales, Scotland and Northern Ireland.

‘As we navigate this unprecedented period, we must be on the front foot of the latest medical advancements, while always ensuring patient safety remains a top priority. 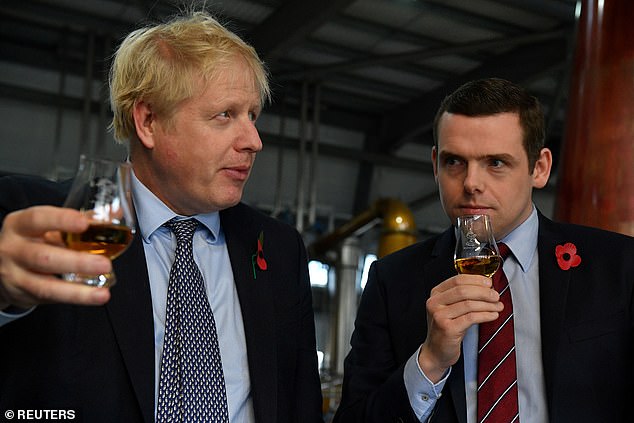 ‘The latest, expert scientific advice is at the heart of every decision we make, and we will continue to monitor remdesivir’s success in clinical trials across the country to ensure the best results for UK patients.’

Remdesivir, which is produced by the California-based company Gilead Sciences, has been approved under the Early Access to Medicines Scheme (EAMS).

Britain’s Medicines and Healthcare products Regulatory Agency (MHRA) gave the go-ahead for NHS doctors to use it on people who are seriously ill with COVID-19.

Officials said: ‘Allocation of the drug will be based on expert clinical advice and will take into consideration the situation where it is most likely to provide the greatest benefit.’

Today also the continuation of the row over government adviser Dominic Cummings’ 260-mile trip from London to Durham during lockdown.

Hancock today insisted Dominic Cummings did not break lockdown rules by travelling 260 miles to Durham as Boris Johnson faced calls from an estimated 40 Tory MPs to axe his top aide amid claims some may be ‘settling scores’.

Mr Hancock told the daily Downing Street press conference that it is his view that Mr Cummings had acted ‘within the guidelines’ but he could ‘understand why reasonable people can take a different view’.

The Health Secretary added: ‘But my judgement, which is the same as the Prime Minister’s judgement, is that what Mr Cummings did was within the guidelines.’

His comments came after the Government was hit this morning by the resignation of Douglas Ross as junior Scotland minister over the row as he said Mr Cummings’ press conference yesterday had left many ‘unanswered questions’.

Mr Ross, a qualified football referee who was previously best known for missing a Commons vote to run the line in a Champions League game, said in his resignation letter he could not in ‘good faith’ tell his constituents ‘they were all wrong’ to observe lockdown ‘and one senior adviser to the government was right’.

Downing Street is this evening facing anger from various sections of the Conservative Party over its handling of the row with many more Tory MPs on top of the 30 who have made clear Mr Cummings should go also expressing disquiet. They include MPs who won seats in the so-called ‘Red Wall’ during the 2019 general election.

However, some senior figures in the party believe there could be an element of ‘settling of scores’ being at play, with many Tory MPs known to have frosty relationships with Mr Cummings because of differences of opinion over Brexit.