THE former trainer of Makaiko the dolphin who was deemed "foolish" and too "heavy" to perform for humans has revealed the heartbreaking story of his life in captivity.

The tragic bottlenose dolphin was so sad after being left alone in his tank that he began banging his head against the walls in an act of self harm. 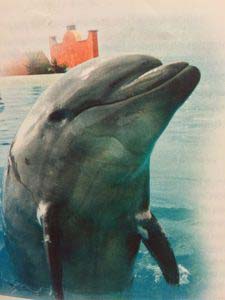 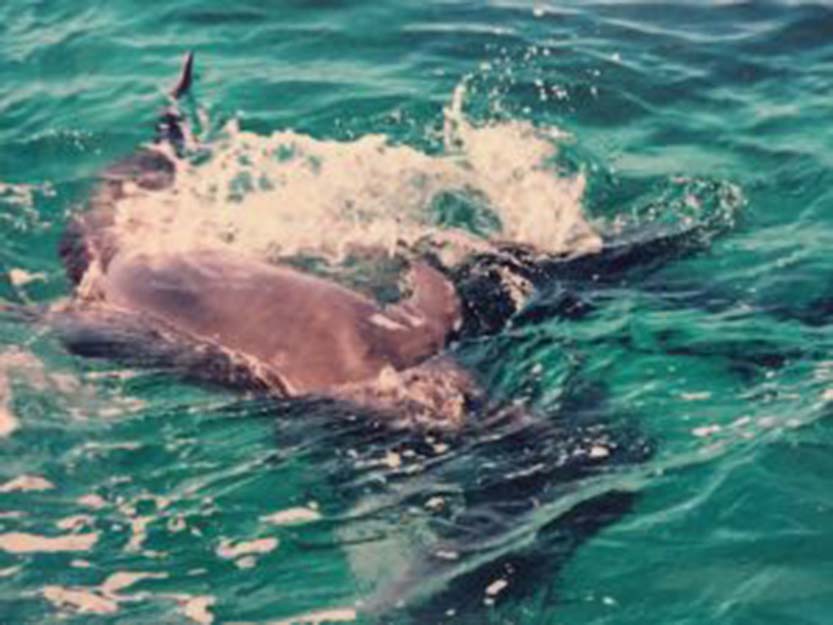 He died a lonely death some ten years ago after being snatched from a life in the sea with his 80-strong family pod – that were either murdered or taken too.

Makaiko  — meaning  "inner strength" — was born in 1996 in the waters of Taiji, Japan, where she socialised with other pods and spent carefree days playing and roaming the wide-open spaces of the Pacific Ocean.

Food was abundant and the pod looked after each other as dolphins do naturally.

But his tranquil way of life was soon torn apart – beginning with the jarring sound of loud motorboats surrounding the pod, according to an account by his former trainer Lorena Kya Lopez for World Animal Protection.

Some of the ambushed dolphins were dragged on board after being trapped by hunting nets.

Those who desperately tried to escape were killed, while the seawater turned red from their blood. Others were taken to slaughter for their meat.

Meanwhile, Makaiko and a few of the pod, including his sister Kumiko, were sold to a dolphinarium in Japan for tourist entertainment.

He was sprayed with water to keep his skin from drying out while being transported on a stretcher that hurt his fins and belly.

Ms Lopez met Makaikowhile working as a marine mammal trainer  at an attraction in Mexico in 2001, 19 years ago.

In the article, she wrote: "Knowing what we know about dolphins, this must have been a painful, stressful and scary moment for them.

"After arriving at his temporary new home, he was placed in a small tank. The water in this tank didn’t come from the ocean, and was treated with chemicals to keep it clean.

"This place was just very different from the ocean. Very empty, sterile and quiet."

No dolphin should have to endure the same sad life and death that Makaiko did.

Soon the trainers began giving fish to the disorientated dolphins – but only if they complied with their orders to perform tricks.

Makaiko was forced to jump up and down, push people with his nose and drag them with his fins, just to earn a meal.

The dolphins had to endure various people touching them and getting in the water with them for hours on end.

Soon he was moved to a dolphinarium in Mexico City, called Six Flags – suffering a hellish 56-hour journey in a small box as he was again ferried away from his home.

Makaiko was smothered in cream to prevent his skin from drying out, but began bleeding as his body couldn't breathe.

Not long after they arrived, his sibling Kumiko -Makaiko's final connection to his beloved pod – became depressed and died.

After bonding with the other dolphins that were held there, they were soon taken to venue on a Caribbean Island to start their lives as entertainers, leaving Makaiko alone again.

Makaiko was said to be considered unsuitable for public performances because did not take orders and was too big and heavy. 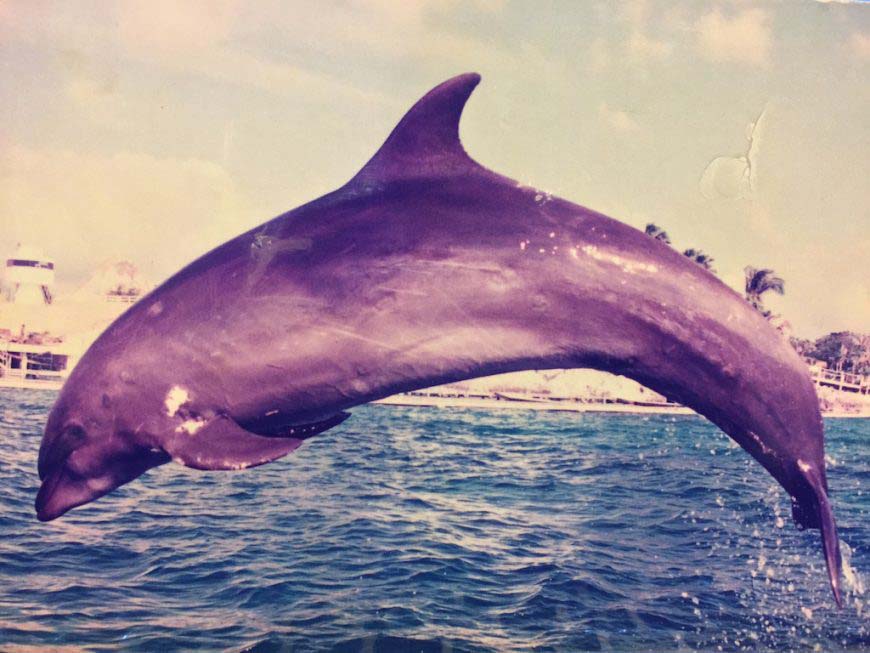 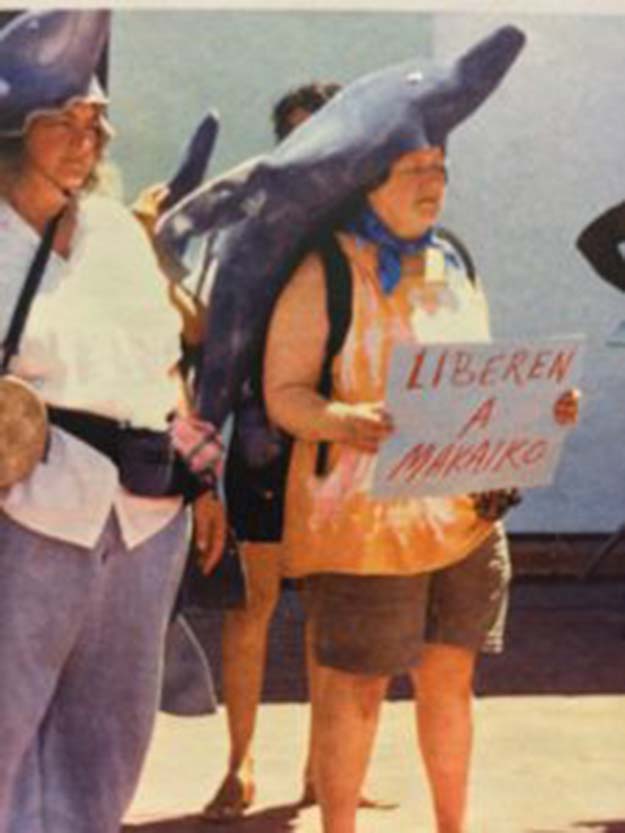 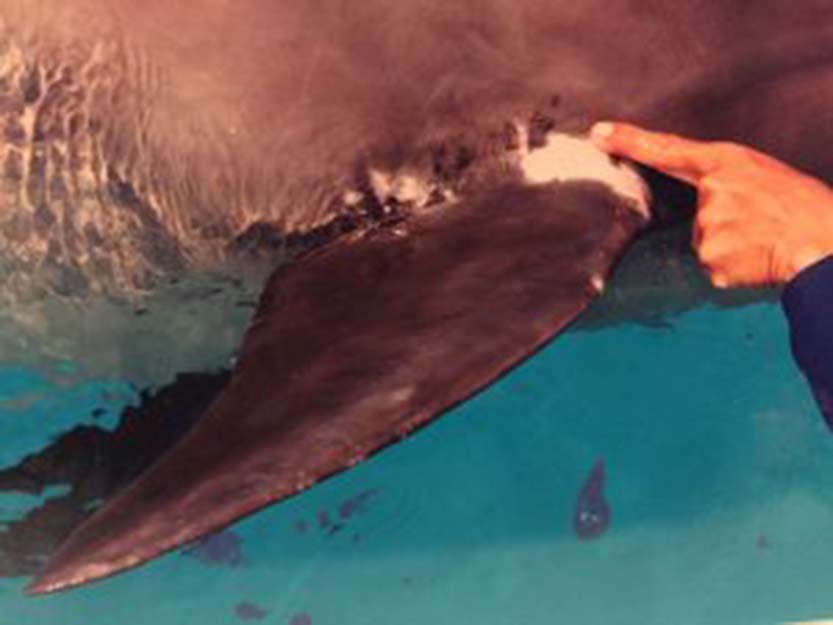 So he was left by himself in heartbreaking conditions.

Ms Lopez said: "He stayed alone for some time, without food, and with a growing sense of anxiety he started banging his head against the walls.

"At some point, people would come in with dead fish, and to clean the water. This was the only time Makaiko wasn’t alone."

After eventually being rescued by the Mexican government, Makaiko was placed with a company called Aqua World.

He was put on a rehabilitation process, lead by Ms Lopez and another trainer, who tried to aid his mental and physical health.

But it was evident that the dolphin was depressed after his endless suffering over the years because he continued to self-harm.

"It was clear that Makaiko was sad, as he once again started banging his head against the walls and we tried everything to stop him from hurting himself," said Ms Lopez.

Finally, Makaiko was transported to Dolphin Discovery at Isla Mujeres. Here, he would spend the last four years of his life.

He could finally swim amongst the ocean but was still confined to a small restricted area.

Makaiko continued to perform for person after person, hour after hour.

Yet following a storm he became tangled in a net placed in the waters and died – having never being able to return to the wild.

Nobody noticed his struggle to reach the surface to breath and he sadly suffocated to death in the place he had been "exploited" for the sake of peoples entertainment.

"No dolphin should have to endure the same sad life and death that Makaiko did," his trainer Ms Lopez said.

She has now shared Makaiko's agonising story in a bid to raise awareness of the dark industry of the global wildlife trade, "which subjects millions of wild animals to suffering every day."