A trainee detective accused of making sexist and racist comments said today he became ‘desensitised’ to the language when he landed a ‘dream job’ with his father’s colleagues in an under-fire police unit.

Andrew Ferguson is one of six officers from Hampshire Constabulary facing a gross misconduct hearing following allegations they made various offensive remarks.

The hearing was told today how he put off reporting abuse which he was worried his bosses were involved in because his father was ‘lifelong friends’ with them and it might jeopardise their relationship. 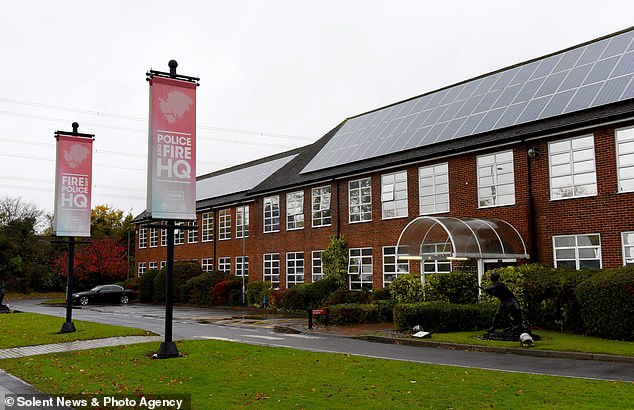 Andrew Ferguson is one of six officers from Hampshire Constabulary facing a gross misconduct hearing, held at the Police and Fire HQ (pictured) in Eastleigh, near Southampton,  following allegations they made various offensive remarks

Within his first weeks on the job, TDC Ferguson heard racist remarks made towards a black colleague but failed to act on it.

It was heard the police officer, who is also accused of making a series of offensive comments about women, was concerned that his bosses ‘were part of the problem’.

The two bosses worked with his father throughout his 40 year career and it was heard TDC Ferguson felt ‘conflicted’ about reporting it as it could cause ‘friction’ in the long-standing friendships.

TDC Ferguson and five other police officers from the force are facing the prospect of disciplinary action following allegations they made ‘ableist, sexist, racist, transphobic and homophobic’ remarks.

The Serious and Organised Crime Unit in Basingstoke, Hants, was bugged after an anonymous tip-off and WhatsApp messages and emails were also monitored.

Trainee Detective Constable Andrew Ferguson’s catalogue of derogatory comments about women show a ‘theme’ of disrespect, it was heard today.

Jason Beer QC said TDC Ferguson has a ‘wide and colourful vocabulary for profanities’ as the police officer claimed he simply made a ‘bad judgement’ by making sexist remarks.

TDC Ferguson also told a colleague ‘she’ll be coming through the door about one in the morning absolutely battered and I’ll try and get my end away’ in relation to his wife and also boasted of having ‘£100 to spend on tits and minge’ at a stag do.

Today, Mr Beer QC asked the officer: ‘Do you see a theme amongst these? There is a lack of respect towards women.’

TDC Ferguson replied ‘I let myself down, I can see a theme however I don’t disrespect females’ but Mr Beer QC hit back: ‘If that’s the truth why do you speak in this way?’

TDC Ferguson said: ‘A lack of foresight in the way I speak and a lack of thinking before I speak.’

The police officer claimed his ‘wide and colourful vocabulary’ is the result of ‘experience’ through work and his life.

Talking about one rude comment he made about a vagina – ‘in which he referred to it as a f*****g horrible growler’ – the officer said: ‘It was completely short-sighted of me, there was a complete lack of professionalism from me.’

He also told the hearing: ‘I didn’t intent to be sexist, I made a bad judgement. I’m ashamed of that but at no point was I trying to discriminate, it’s not the person that I am, nobody has ever complained about me.’

The police officer, in his mid-30s, is also ‘responsible for racist comments including ‘you could see an Albanian a mile off’ and ‘pikey’.’

He said they had ‘close relationships’ and that his father and DI Ireson – who was in charge of the unit – go on walking holidays together.

During an investigation, when asked why he didn’t report racist abuse made towards a black co-worker, TDC Ferguson told investigators ‘it came to a conclusion due to the long-standing friendship my dad had with the management team’.

At the misconduct hearing, Mr Beer QC said: ‘If the supervisors did know about what was going on, reporting them might get them into trouble and that would cause friction or difficulty with the lifelong friendship they had with your dad.’

TDC Ferguson admitted that ‘it might have’ and said he ‘felt conflicted about approaching them’.

Mr Beer QC replied: ‘Is the reason you didn’t report it because they were part of the problem, they were friends with your dad and the report would be to them?’

TDC Ferguson said: ‘I had conflicts in my head… Did they know about stuff and not do anything about them? I didn’t know.’

But when asked if his father’s friendship with them had anything to do with his failure to report it, he admitted: ‘It didn’t help.’

TDC Ferguson also admitted he was put off reporting abuse because he had only just joined the unit – which was his ‘dream job’ – after trying for several years and didn’t want to be ‘ostracised’.

He said: ‘Sadly and embarrassingly, I didn’t want to ostracise myself in the office by coming forward, and I am sorry about that.

‘It was a consideration, I was putting my career first. I tried for several years to get on that department and I wanted to make sure I was doing the right thing.’

The police officer also burst into tears as he told the hearing he is ‘sorry for not having the courage’ to report abuse.

TDC Ferguson even sought his father for advice. It was heard his father, who was not named, said: ‘Andrew was upset and distressed and was telling me he could not believe the way people were talking.

‘I told my son ‘this is the way it used to be’ and he told me it was way worse than that, he was absolutely distressed. I can see how this has affected my son.

‘He blames himself for not having the strength to report it… He feels like he has let down his family.’

Tearful TDC Ferguson, who is accused of failing to report a catalogue of offensive comments, said he became ‘desensitised’ to the language used in the station.

He said: ‘I’m sorry for not having the courage to address it myself and I tried to go as far as I could but I didn’t.

‘You become desensitised to certain things and end up using language that you would not usually do.

‘The behaviour of swearing, laughing and joking around, I became desensitised to it to a certain degree.’

He also said: ‘It’s something that I will always regret, I’m not proud of not coming forward… I will say this is the single worst experience of my life.’

The officer, when asked why he made a series of derogatory comments about women, said: ‘I don’t sit here and try to endorse it, I’m embarrassed by what I have said.’

The hearing has now been adjourned until December 14.