Exhaust fumes billowed into the air as two drivers attempted to shunt each other out of the way and engaged in a strange ‘road war’ in Greater Manchester.

CCVT footage captured by a resident on a street in Dunkinfield in Tameside shows a white Ford Transit van and a grey BMW approach each other on the narrow road and refuse to give way.

The motorists inside the vehicles then try to ram each other out of the way as smoke from their tyres and exhaust fumes billow into the air. 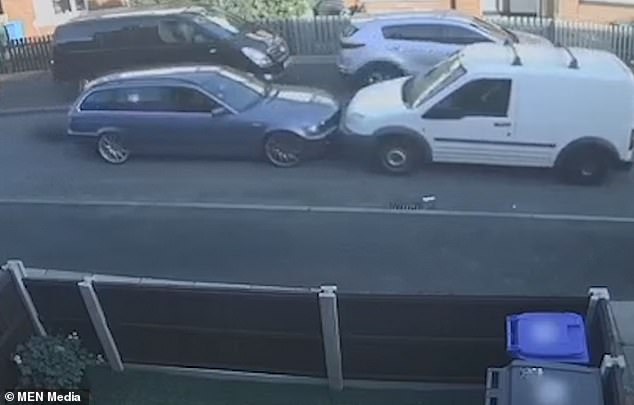 The white Ford Transit van and grey BMW approach each other on the narrow road in Dunkinfield, Greater Manchester, and refuse to give way

During the bizarre clip, which was filmed on September 3, the drivers inside the BMW and white van approach each other from opposite directions on the street.

The driver of the grey BMW steps out of his vehicle and appears to exchange heated words with the Transit van driver before returning behind the wheel.

Just seconds later, smoke from their tyres and exhaust fumes are released into the air.

After nearly a minute of going back and forth, the BMW driver then reverses his car and the Transit van finally passes him.

The owner of the footage, who did not wish to be named, explained that they had been watching TV inside their home when they heard the ‘screech of tyres’ and ‘bumpers clashing’.

They told Manchester Evening News: ‘I was watching TV with my son and we heard a screech of tyres, bumpers clashing and saw the smoke. 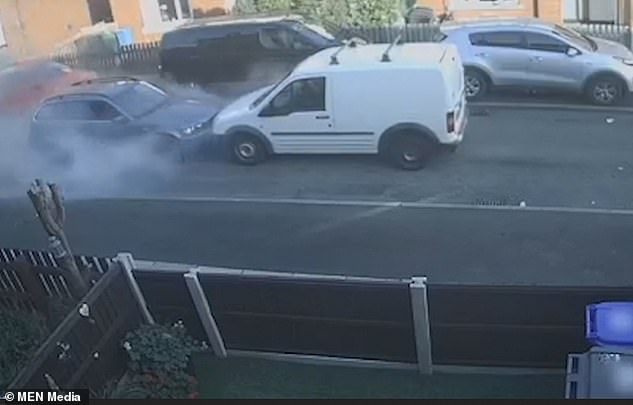 As the drivers continue to ram each other out of the way, smoke from their tyres and exhaust fumes are released into the air 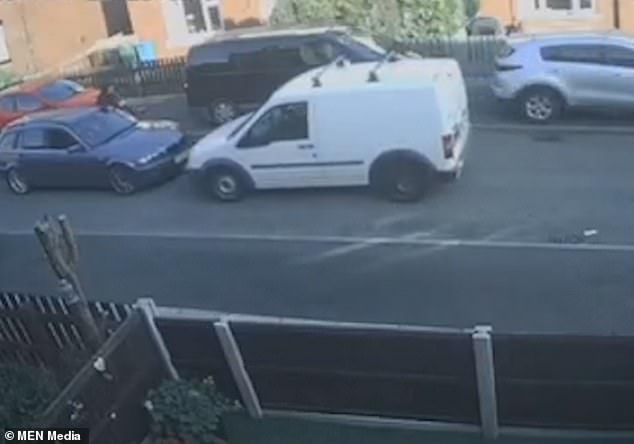 ‘They were gone as quick as they came. It left us shocked, but luckily there was no damage done to other cars. There were tyre marks on the road.

‘I’ve never seen the cars on the street before either, but it is becoming a bit of a rat run.’

Greater Manchester Police told MailOnline the incident has not been reported.