Electric trains will run to Wyndham Vale within five to 10 years, Treasurer Tim Pallas has confirmed amid fears the desperately needed rail upgrade for the booming west had been put on the backburner.

Western councils, academics and public transport advocates have called on the Andrews government to prioritise its 2018 state election commitment to electrify the rail lines to Melton and Wyndham Vale as part of its Western Rail Plan. 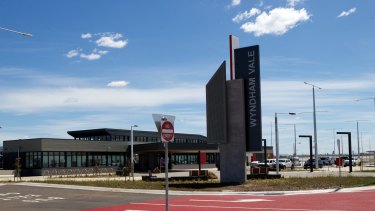 Electrification on these lines involves building new electric tracks to Sunshine, thereby separating Geelong and Ballarat trains from Wyndham Vale services, which would be brought within Metro's suburban network. Seven level crossings on the Ballarat line would require removal.

The Andrews government unveiled an ambitious public transport agenda in its 2020-21 state budget, announcing $2 billion for Geelong Fast Rail, $2.2 billion for early works on the south-eastern section of the Suburban Rail Loop and $1.48 billion for 100 next-generation trams.

While public transport advocates have applauded the spending, they are concerned that the western electrification works are dropping off the government's priority list.

When asked on Friday when electrification would be under way, the Treasurer – whose electorate takes in Wyndham Vale – said it would occur within a decade.

"Yes, we will get the electrification built, but it will take time," he said.

"We've still got quite some time before we complete the delivery of the Melbourne Airport rail link, Geelong Fast Rail, all of those things will necessarily facilitate us to getting to where we need to go, but it will be the better part of five to 10 years." 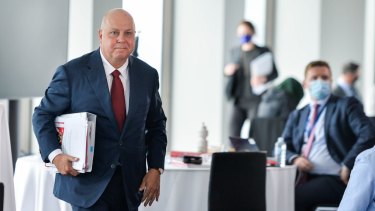 The joint federal and state funding for the Melbourne Airport rail link and Geelong Fast Rail – amounting to $14 billion – was evidence that "there is a lot of money being spent in these communities," he said.

The expansion of the urban growth boundary by successive Victorian governments has enabled runaway growth in the west of Melbourne, but a lack of employment options means a large number of residents commute to the city for work.

The demand for rail also increased after the opening of the Regional Rail Link in 2015, which saw two new tracks built between Southern Cross and Sunshine and the opening of Wyndham Vale and Tarneit stations.

Five years on, there is barely room to run more services on the Regional Rail Link tracks, with 17 trains running per hour of a total capacity of 18.

"It's called the Western Rail Plan, but if there's a plan then what are the timelines? Where is the overall concept and how does the current announcement on Geelong Fast Rail fit in?"

The Andrews government came under fire for withholding a key part of this year’s state budget papers this year, which normally outlines the state's capital works program, including expenditure on major projects.

Transport Infrastructure Minister Jacinta Allan said on Friday the papers were withheld "on the advice of Treasury and Finance".

"They felt it was appropriate to have the recounting of those projects in the 2021 budget, which is only a few months away."

It follows the leaking of separate caches of internal government documents to The Age, revealing the $6.7 billion West Gate Tunnel faces a $3 billion blowout, while the $11 billion Metro Tunnel faced similar overruns, with the government believed to have paid the project's builders an extra $1 billion to resolve a protracted dispute over costs.

Ms Allan said once negotiations concluded on both major projects, the government would confirm the extra cost to taxpayers.

When asked about for a guarantee on whether the protracted dispute between Transurban and its builders on the West Gate Tunnel would be resolved by the end of the year, Ms Allan said the government has told the companies that it wanted a resolution as soon as possible.