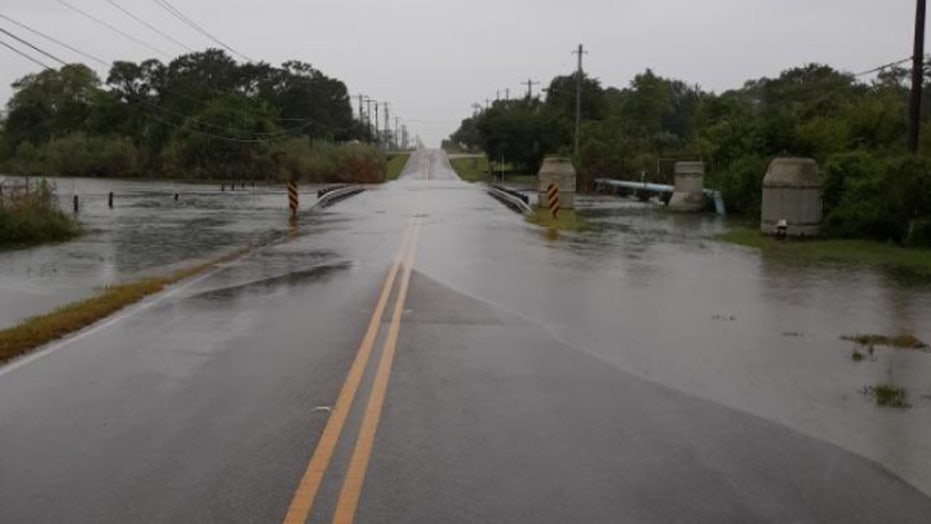 Tropical storm conditions will spread over the Texas coast on Monday morning as Tropical Storm Beta churns toward landfall, even as the storm is already bringing flooding to low-lying areas.

"The problem with this storm, it's going to bring heavy rainfall to areas that were hit by Hurricane Laura," Fox News Senior Meteorologist Janice Dean said on "Fox & Friends."

BEST WAY TO PREPARE FOR A STORM SURGE

While Beta is no longer expected to gain hurricane strength, forecasters have cautioned that Beta could drop up to 15 inches of rain in some locations. 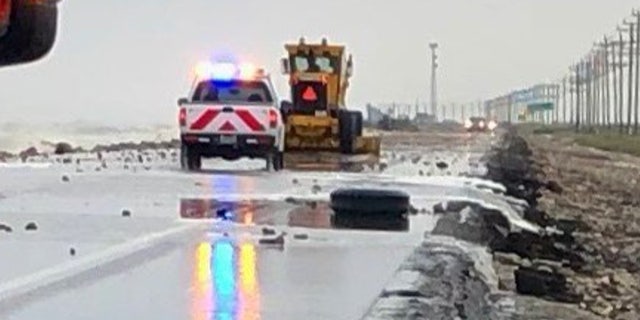 Storm surge flooding can be seen causing problems on Texas State Highway 87 along the Texas Gulf Coast, with debris on the roadway.
(Texas Department of Transportation)

The storm's slow movement and storm surge were already generating flooding in coastal communities over the weekend.

Rising water levels were reported in several areas along the central Texas coast including in Galveston, where officials advised residents to have supplies ready in case they have to stay home for several days if roads are flooded.

The rough surf and high tide brought structural damage to the 61st St. Fishing Pier in Galveston late Sunday night, causing part of the structure to break off and float away. 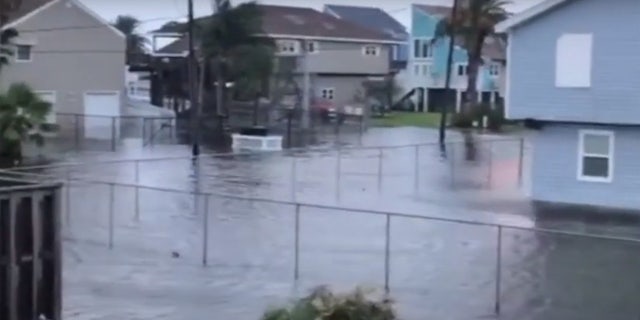 Storm surge flooding can be seen in Jamaica Beach, Texas as Tropical Storm Beta nears the coast.
(@ttuheather via Storyful)

Kitcheo said while she expects her street to be impassable after storm surge also flooded neighborhood roadways, her home is 18 feet above the ground on stilts.

“This has definitely been more stressful, this hurricane season," she said.

The Galveston Office of Emergency Management said that high water assets were being positioned around the city of 50,000 in preparation for the storm.

Flooding was also reported in parts of Harris County, Texas, as outer bands of the storm brought rain and storm surge that impacted the area. 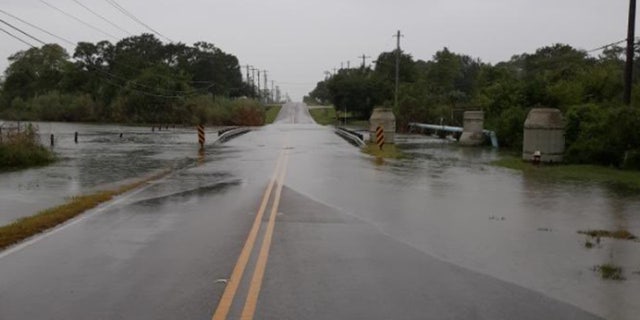 Houston Mayor Sylvester Turner said Sunday that while Beta was not expected to bring rain like Hurricane Harvey in 2017, he cautioned residents to “be weather alert.” 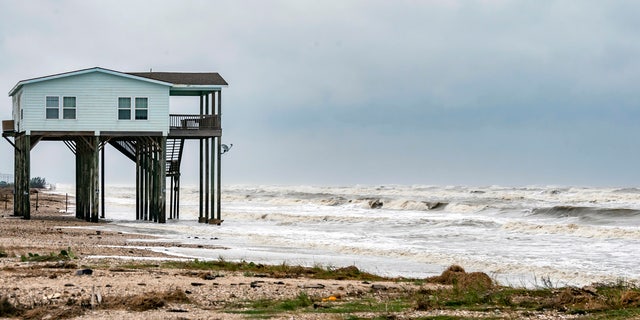 A house sits on the beach on Bolivar Peninsula, Texas, buffeted by the winds and rough surf, Sunday, Sept. 20, 2020.
(Fran Ruchalski/The Beaumont Enterprise via AP)

“Be weather aware because things can change. This is 2020 and so we have to expect the unexpected," said Turner, adding the city expected to activate its emergency center on Monday.

"We understand that the threat of severe weather is even more of a risk in some areas at this time," the governor said in a series of tweets. "We have started communication with our local partners as the storm approaches the state."

The latest forecast from the NHC has Tropical Storm Beta making landfall by Monday night along the central Texas coast. 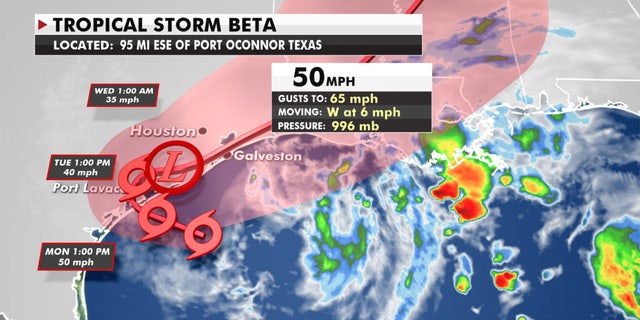 Tropical storm warnings along with some storm surge warnings are in effect from Texas through to southwestern Louisiana. A storm surge between 3 to 5 feet is possible, especially at the time of high tide. 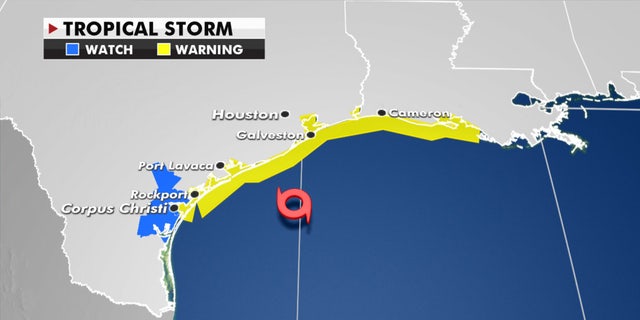 The system will weaken by Tuesday as it slowly moves northeast, remaining close to the coast of southeastern Texas.

Heavy rain will be the biggest risk with this storm over the next few days as it continues to crawl northward. 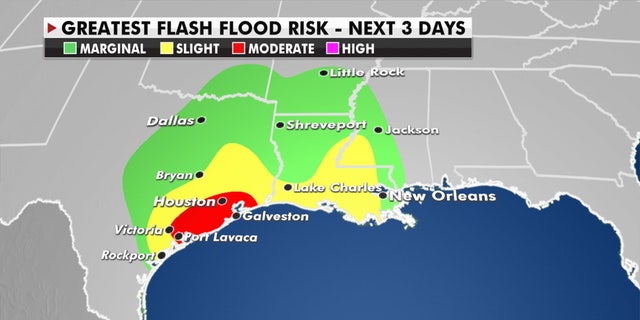 The greatest flash flood risks over the next three days from Tropical Storm Beta.
(Fox News)

"The expected slow motion of Beta will produce a long duration rainfall event from the middle Texas coast to southeast Louisiana," the NHC said in its latest update. "Flash, urban, and minor river flooding is likely." 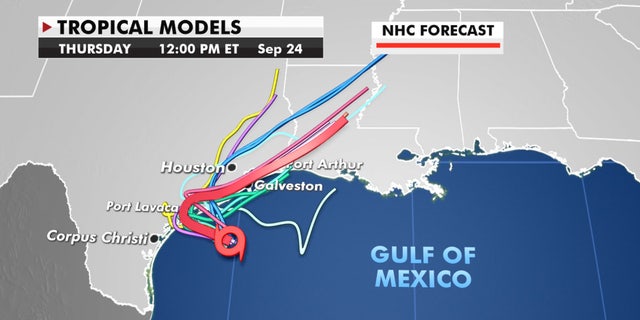 While the central Texas coast to southeast Louisiana could see 5 to 10 inches of rainfall with isolated amounts up to 15 inches, the ArkLaTex region and the lower Mississippi River Valley will also see several inches of rain through the end of the week. 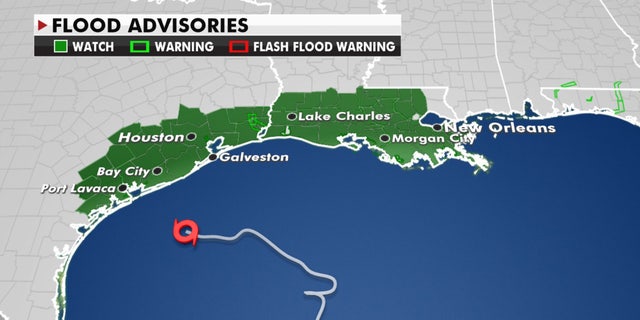 A tornado or two could also happen on Monday into Monday night along the Texas and southwestern Louisiana coasts.

Beta is one of three named storms whirling in the Atlantic basin during an exceptionally busy hurricane season. The 2020 Atlantic hurricane season has broken numerous records, as forecasters on Friday, ran out of traditional names and went to the Greek alphabet for storms Alpha and Beta. 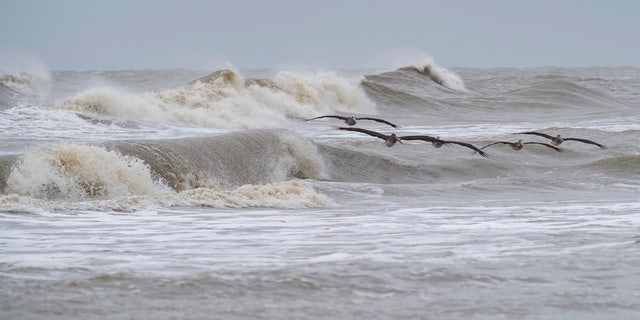 A squadron of pelicans navigates through the rough surf on Crystal Beach in the Bolivar Peninsula, Texas, on Sunday, Sept. 20, 2020.
(Fran Ruchalski/The Beaumont Enterprise via AP)

This was only the second time in history that hurricane center forecasters have had to pull out the Greek alphabet for names, with the last time being 2005.

If the system makes landfall in Texas it would be the ninth named storm to make landfall in the continental U.S. in 2020. Colorado State hurricane researcher Phil Klotzbach said that would tie a record set in 1916. 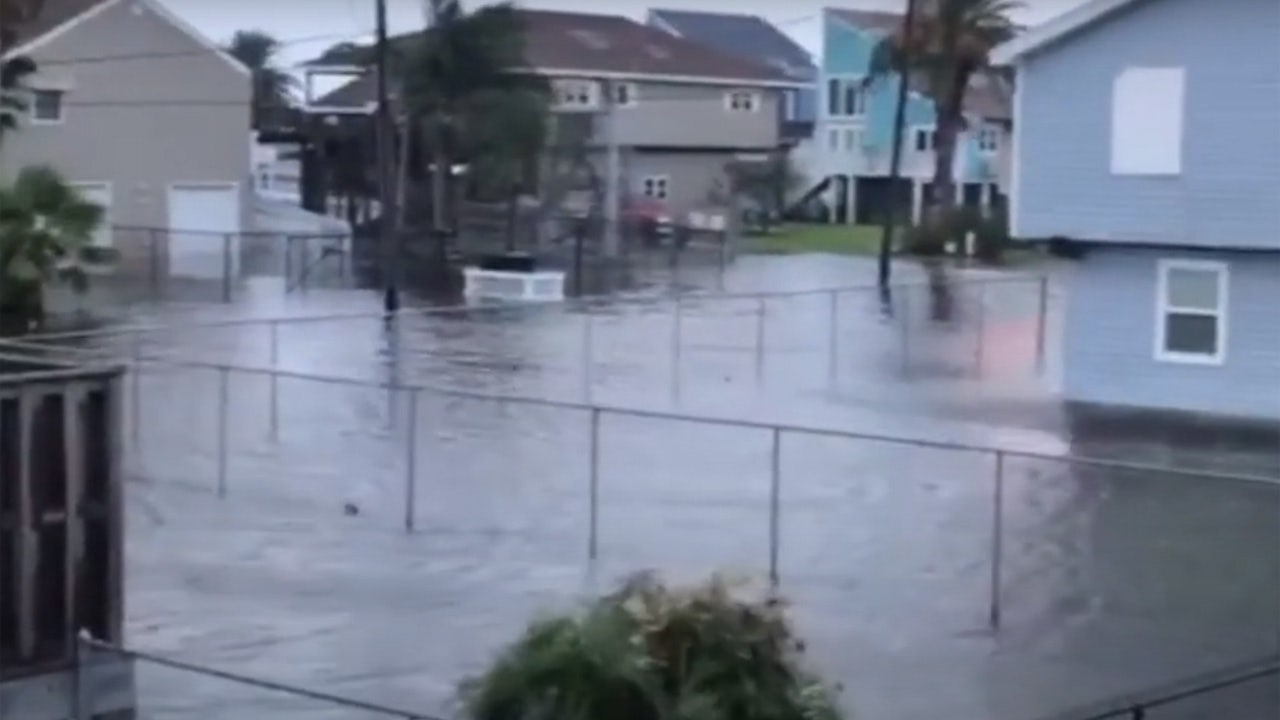 2020 Atlantic hurricane season is running out of names, so what happens next?