Beijing: A US travel warning telling citizens to avoid China has upset the Asian nation's leaders, as the death toll from the coronavirus epidemic reached 213.

Russia, Britain, Sweden and Italy all reported their first cases, while a national emergency was declared in Italy as officials sought to reconstruct the itinerary of two infected Chinese tourists. 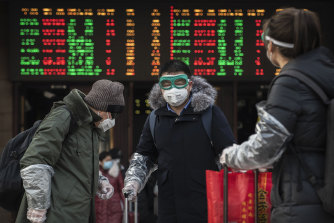 Chinese travellers wear protective masks and goggles after getting off a train in Beijing.Credit:Getty Images

In the latest impact to big-name corporations, South Korea's Hyundai Motor said it planned to halt production of a sport utility vehicle this weekend to cope with a supply disruption caused by the outbreak.

After holding off as the crisis grew, the WHO said on Thursday the epidemic in China – which originated from animals in Wuhan city and has infected nearly 10,000 people – did constitute a public health emergency of international concern.

"We have full confidence and capability to win this fight," she said.

The roughly 60 million residents of Hubei province, where Wuhan is the capital, have had movements curbed to try and slow the spread.

But some people were leaving and entering the area by foot on a bridge over the Yangtze river, a Reuters witness said, and infections have jumped in two cities flanking Wuhan.

Wuhan's Communist Party chief said the city should have acted earlier to contain the virus.

The number of confirmed cases in China has risen beyond 9800, Beijing's envoy to the UN in Vienna said.

More than 130 cases have been reported in at least 25 other countries and regions.