Donald Trump has accused Mike Bloomberg of ‘bribing ex-prisoners to go out and vote for Sleepy Joe’ after a probe was launched into the billionaire’s fundraising.

The former Democrat candidate donated $16 million to the Florida Rights Restoration Coalition, an initiative for felons to pay their debts so they can vote in the presidential election.

Florida Attorney General Ashley Moody opened a federal investigation last week into Bloomberg’s payments over allegations that they violated the law by offering incentives for voting.

Trump tweeted Sunday: ‘Wow, nobody realized how far Mini Mike Bloomberg went in bribing ex-prisoners to go out and vote for Sleepy Joe. He is desperate to get back into the good graces of the people who not only badly beat him, but made him look like a total fool. Now he’s committed a serious crime!’ 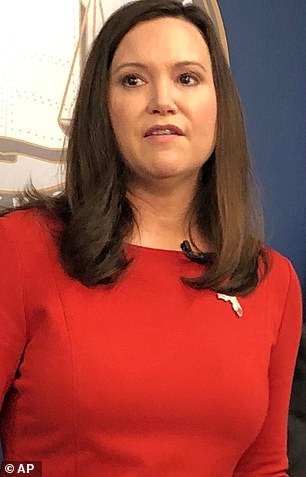 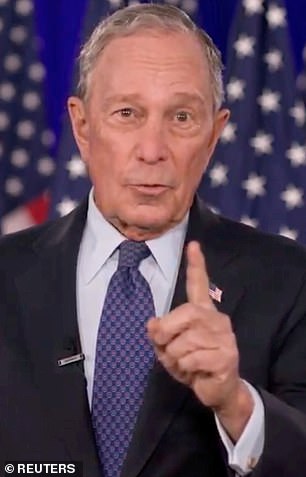 Trump tweeted Sunday: ‘Wow, nobody realized how far Mini Mike Bloomberg went in bribing ex-prisoners to go out and vote for Sleepy Joe. He is desperate to get back into the good graces of the people who not only badly beat him, but made him look like a total fool. Now he’s committed a serious crime!’

The $16 million was part of a broader investment of $100 million effort by Bloomberg ‘to help elect Democrat Joe Biden’, The Washington Post reported.

Moody opened her review at the request of Governor Ron DeSantis and House Rep. Matt Gaetz. DeSantis, Gaetz, and Moody are Republicans.

‘I have instructed the Statewide Prosecutor to work with law enforcement and any Statewide Grand Jury that the Governor may call,’ Moody said in a written statement.

In 2018, voters approved a constitutional amendment to restore most felons’ voting rights once they’ve completed their sentences.

The exception was for murderers and sex offenders.

But when crafting the law to implement the amendment, the Republican-dominated Legislature said that rights wouldn’t be restored until all fines, court fees and restitution were paid.

The Florida Rights Restoration Coalition says it doesn’t target people based on their political affiliation.

A federal appellate court ruled on September 11 that in addition to serving their sentences, Florida felons must pay all fines, restitution and legal fees before they can regain their right to vote.

The case could have broad implications for the November elections.

Florida has 29 electoral college votes that are crucial to President Donald Trump´s hopes of staying in the White House.

The money Bloomberg raised is targeted for felons who registered to vote while the law was in question and who owe $1,500 or less.

That accounts for about 31,100 people, his staffers said.

In a state that decided the 2000 presidential election by 537 votes, that could be critical in a year when polls show Trump and former Vice President Joe Biden in a dead heat.

The Florida Rights Restitution Coalition had raised about $5million before Bloomberg made calls to raise almost $17million more, according to Bloomberg staffers.

Agriculture Commissioner Nikki Fried, Florida’s only statewide elected Democrat and a member of the Cabinet, criticized the decision to investigate Bloomberg.

‘Florida Republicans will stop at nothing to prevent people from voting, and this is another ploy to suppress the voices of those trying to regain their right to vote,’ Fried said in a statement.

‘Whether Mike Bloomberg, John Legend or Lebron James, these are are contributions made legally.’

The question of satisfying financial obligations before voting rights are restored continues to be battled in court.

On September 11, a federal appeals court reversed a lower court ruling that gave Florida felons the right to vote regardless of outstanding restitution, court fees and fines.