Once plan goes into effect, those at US southern border would only be eligible for asylum if they go to official port. 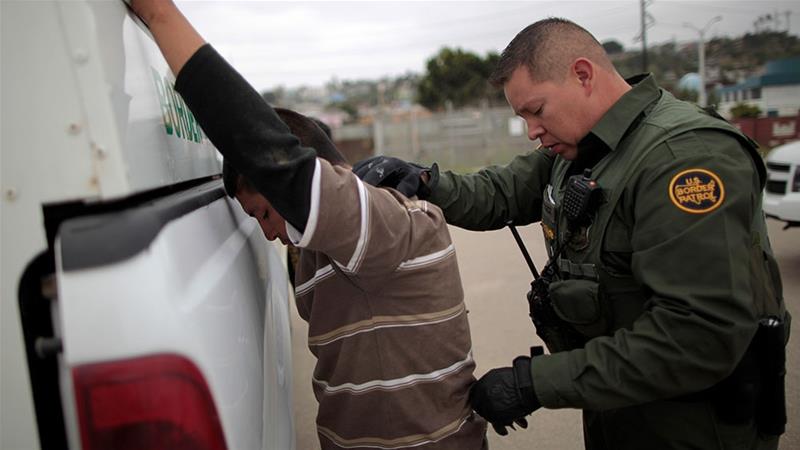 The Trump administration took a major step on Thursday to restrict asylum claims, putting forward a regulation that would make individuals ineligible for asylum if they cross the US southern border between official ports of entry.

Once the plan goes into full effect, which is expected to happen in coming days, migrants entering at the US southern border would only be eligible for asylum if they come to official ports of entry.

“What we are attempting to do is trying to funnel … asylum claims through the ports of entry where we are better resourced, have better capabilities and better manpower and staffing to actually handle those claims in an expeditious and efficient manner,” a senior administration official told reporters in a news briefing on Thursday, on condition of anonymity.

The plan is President Donald Trump’s administration’s latest move to limit the eligibility of individuals for asylum in the United States.

The regulation would largely affect migrants from Central America’s Northern Triangle – Guatemala, Honduras and El Salvador – who cross the US border with Mexico to flee violence, including political persecution, and poverty in their home countries.

“The vast majority of aliens who enter illegally today come from the Northern Triangle countries, and large portions of those aliens assert a credible fear,” the regulation’s text says. “Channeling those aliens to ports of entry would encourage these aliens to first avail themselves of offers of asylum from Mexico.”

“US law specifically allows individuals to apply for asylum whether or not they are at a port of entry,” said Omar Jadwat, director of the American Civil Liberties Union’s Immigrants’ Rights Project. “It is illegal to circumvent that by agency or presidential decree.”

The move comes less than 48 hours after the midterm election in which Republicans maintained their hold on the Senate, but lost control of the House to the Democrats.

During the election, Trump put immigration at the top of voters’ minds, seeking to sow fear over a caravan of Central American migrants and asylum seekers.

Last week, he said he would be taking steps to limit asylum claims. His administration also deployed thousands of troops to the border, and said he massive tent cities are being erected to house asylum seekers until there is a decision on their application.

The initial wave of the caravan left Honduras a month ago, and thousands more have followed and are currently trekking north.

The US president railed against the caravan in the lead up to the election, telling the refugees and migrants they would not be welcomed in the United States.

The caravan has remained undeterred, and participants have told Al Jazeera they plan on applying for asylum at an official port of entry.

After Trump’s announcement about the new proposals last week, a group of caravan participants filed a lawsuit against the administration on the behalf of minors.

The suit claims Trump “continues to abuse the law, including constitutional rights, to deter Central Americans from exercising their lawful right to seek asylum in the United States”.