Washington: US President Donald Trump has announced new sanctions and tariff hikes against Turkey to punish the country for its invasion of north-eastern Syria – an operation he waved through a little over a week ago.

Trump said the US would increase tariffs on Turkish steel imports from 25 to 50 per cent and impose sanctions against any Turkish officials involved in the military actions.

It will also stop negotiations on a new trade deal with the country. 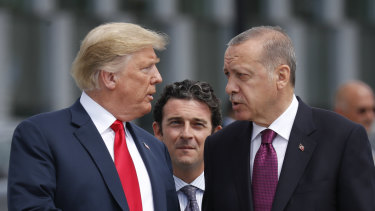 "Turkey’s military offensive is endangering civilians, and threatening peace, security, and stability in the region," Trump said in a statement on Monday local time (Tuesday AEDT).

"I have been perfectly clear with President Erdogan: Turkey’s action is precipitating a humanitarian crisis and setting conditions for possible war crimes."

Turkey's invasion of the Kurdish-dominated region in Syria came after Trump announced US troops would withdraw from the area and would not seek to prevent the Turkish incursion.

"Turkey will soon be moving forward with its long-planned operation into Northern Syria," the White House said in a statement issued last Sunday local time. 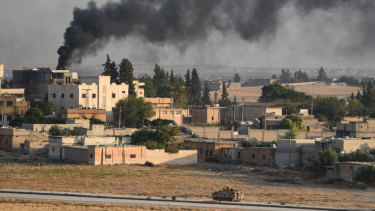 A Turkish army armoured vehicle advances in the Syrian city of Tel Abyad, as seen from the Turkish border town of Akcakale on October 13.Credit:Getty

"The United States Armed Forces will not support or be involved in the operation, and United States forces, having defeated the ISIS territorial 'Caliphate,' will no longer be in the immediate area."

US politicians, including senior Republicans, immediately warned that the move would be a colossal mistake as it would endanger the Kurds and allow ISIS to regroup.

In his statement on Monday Trump said: "The United States will aggressively use economic sanctions to target those who enable, facilitate and finance these heinous acts in Syria.

"I am fully prepared to swiftly destroy Turkey’s economy if Turkish leaders continue down this dangerous and destructive path."

Earlier in the day Republican Senate Leader Mitch McConnell, who rarely criticises Trump, said he was he was "gravely concerned" by what was unfolding in Syria.

"For years, the United States and our Syrian Kurdish partners have fought heroically to corner ISIS and destroy its physical caliphate," McConnell said.

"Abandoning this fight now and withdrawing US forces from Syria would re-create the very conditions that we have worked hard to destroy and invite the resurgence of ISIS."