Trump spoke to reporters in the Oval Office alongside Egyptian leader Abdel Fattah el-Sisi, who he referred to has his ‘friend.’

‘I think he is doing a great job,’ Trump said.

That came in response to a question about whether he thought the Egyptian ruler should be allowed to remain in power until 2034.

Egypt’s parliament voted overwhelmingly in February to approve a set of constitutional amendments including one that would extend presidential terms from four to six years.

It would also start the clock afresh for Sisi, who is scheduled to be term-limited out of office in 2022. 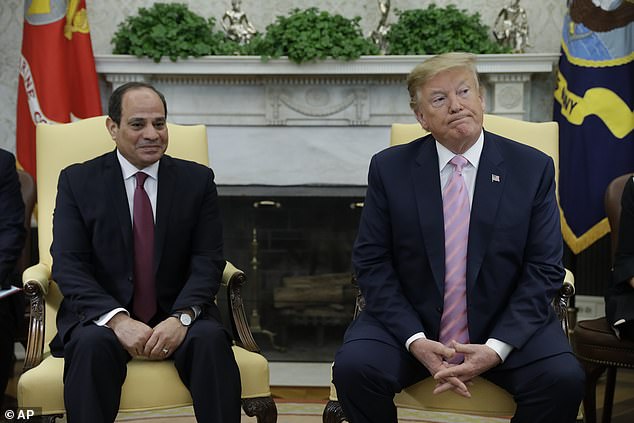 President Donald Trump met with Egyptian President Abdel Fattah el-Sisi in the Oval Office of the White House on Tuesday, saying his Cairo counterpart is his ‘friend’ and ‘doing a great job’ 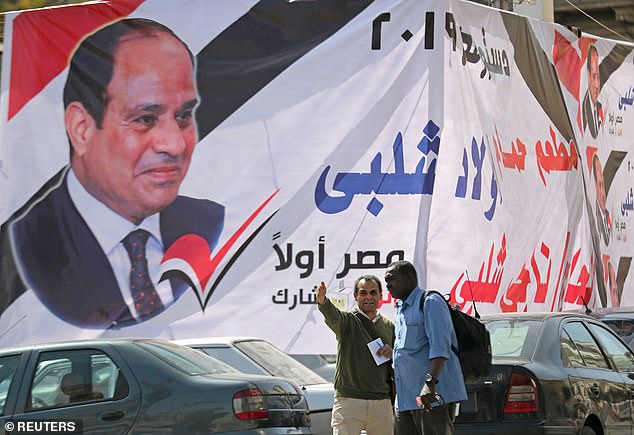 A banner of el-Sisi hangs in Tahrir Square in Cairo, promoting his bid for an extension of his legal term limits that will be voted on in an upcoming constitutional amendment referendum 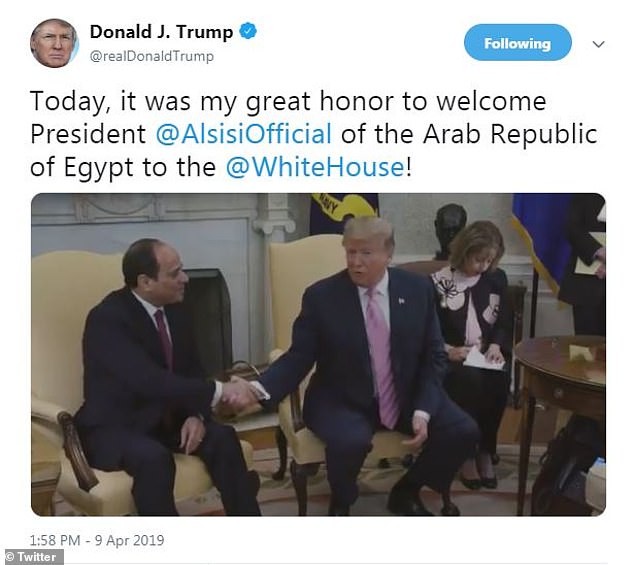 Trump tweeted that is was his ‘great honor’ to praise Sisi at the White House; the two men have met a half-dozen times, including twice at America’s presidential mansion

Under the proposal, which still has to clear a popular referendum, he would be permitted to run for two additional terms – something no future leader would be allowed to to.

The referendum will also call for the nation’s military to get broad new powers.

Sisi led the 2013 military overthrow of the elected but divisive Islamist president Mohammed Morsi. He has presided over an unprecedented crackdown on dissent, and was re-elected last year after all of his potentially serious challengers were jailed or pressured to exit the race.

Speaking in Arabic, Sisi told reporters at the White House on Tuesday that military, economic and cultural cooperation between the U.S. and Egypt are strong.

Trump added that he expected the afternoon’s bilateral meetings to focus on counter-terrorism, military issues and trade.

Tuesday’s meeting was the sixth between the two leaders, and their second at the White House.

Egypt’s capital is awash with large posters and banners encouraging people to vote in favor of the constitutional referendum.

Monst of the banners in Cairo’s central Tahrir Square, where mass protests became the symbol of the 2011 uprising and hopes of democratic change in Egypt, were apparently funded by pro-government parties, businessmen and lawmakers.

U.S. lawmakers are concerned about Egypt’s reported signing of a $2 billion deal with Russia to buy more than 20 Sukhoi SU-35 fighter jets, along with weapons for the aircraft.

Trump has warmly embraced Sisi despite concerns among members of Congress and human rights advocates about repression in Egypt.

In a letter released on Monday, key senators told Secretary of State Mike Pompeo there was strong support for the security relationship with Egypt but urged him to convey their concerns about democratic governance, political freedom, economic reforms and fundamental human rights in the country.

‘A strong and sustainable U.S.-Egypt strategic partnership is vital for both countries but it requires Egypt to make a tangible effort to make those reforms,’ read the letter, signed by the Republican chairman and the top Democrat on the Senate Foreign Relations Committee as well as 15 other senators.

In addition to human rights, Trump is expected to address natural gas development in the Eastern Mediterranean Sea and Egypt’s efforts to defuse tensions in Gaza through negotiations with Hamas.

He tweeted that welcoming Sisi was ‘my great honor,’ along with a video montage from the brief visit – accompanied by a triumphant campaign-style soundtrack.

As he sat with Sisi in the Oval Office, the president deflected attention away from his guest and on his wife instead.

‘The first lady was recently in Egypt. She was treated beautifully,’ Trump said. ‘But maybe even more importantly, what she saw with the Pyramids was – you could call it the seventh wonder or the eighth wonder of the world.’

‘So hopefully a lot of people will be going and looking at them. But she’s not easily impressed,’ he said. ‘She was very impressed.’