The US president was due to fly by helicopter to Belleau Wood cemetery about 55 miles (80km) east of the French capital this afternoon.

Mr Trump was set to join other world leaders for dinner at the Musee d’Orsay on Saturday evening before going to another American cemetery in the Paris suburbs on Sunday morning.

He is still expected to attend a ceremony on Sunday in Paris, at the tomb of the unknown soldier, at the Arc de Triomphe, to mark the anniversary of the agreement. 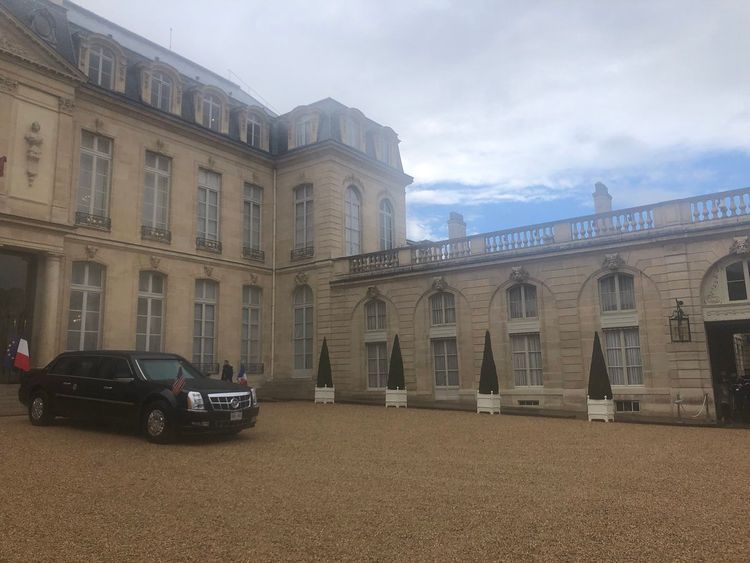 He has already declined an invitation to the Paris Peace Forum, being run by Emmanuel Macron, which opens on Sunday afternoon.

Sky’s Europe correspondent Mark Stone tweeted: “On the face of it, it does seem odd that @realDonaldTrump has cancelled a trip to US war cemetery east of Paris ‘due to bad weather’. I’m no expert on flying presidential choppers but the weather’s clearing up in Paris. To the east 70% chance of rain at cemetery this afternoon.”

As he landed earlier this morning, Mr Trump asked if anything is better to celebrate than the end of a war.

His arrival comes amid a row between France and the US over Mr Macron’s call for a European Army, which dominated their first press conference together at the Elysee Palace. 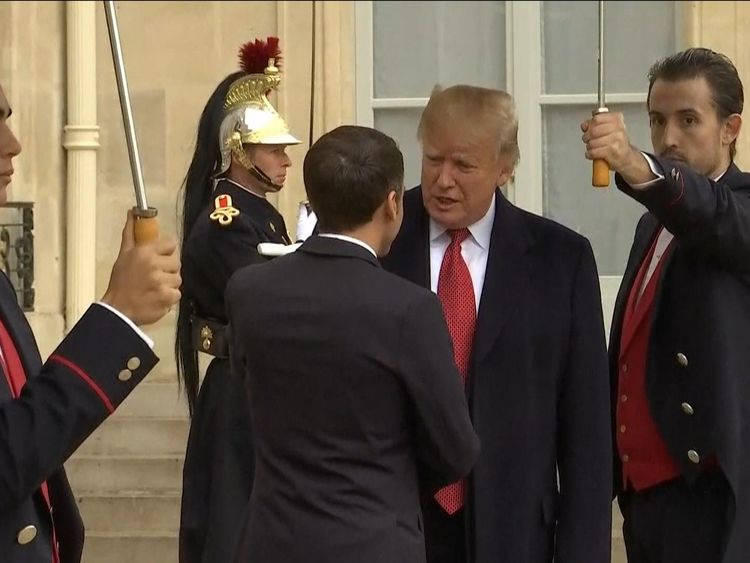 The pair are also due to discuss trade while Mr Trump is in France, with the US leader saying they will see if they can “get over the line”.

As he landed, Mr Trump tweeted: “I am in Paris getting ready to celebrate the end of World War One. Is there anything better to celebrate than the end of a war, in particular that one, which was one of the bloodiest and worst of all time?”

Despite this year’s Armistice being the centenary year, the events could be dominated by the row between Mr Trump and Mr Macron.

In his first comments after greeting the French leader, Mr Trump said: “We want a strong Europe, it’s very important to us and whichever way we can do it the best and more efficient would be something we both want.

“We want to help Europe but it has to be fair. Right now the burden sharing has been largely on the United States.”

Mr Macron has stood by his calls for European defence, and said: “It’s unfair to have European security today being assured by the US.

“That’s why I believe we need more European capacities and more defence to take this part of the burden.” 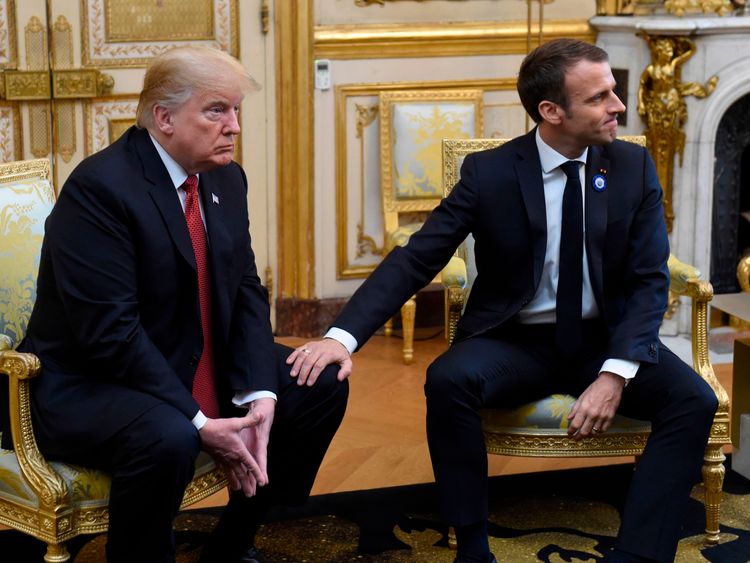 The two leaders have forged a good relationship, often calling each other a “friend”, but there was a level of tension when they met on Saturday morning.

As the press conference finished, Mr Macron smiled to cameras and placed a hand on Mr Trump’s knee.

Canadian Prime Minister Justin Trudeau is also in France, where he paid homage to veterans at a First World War memorial in the north of the country. 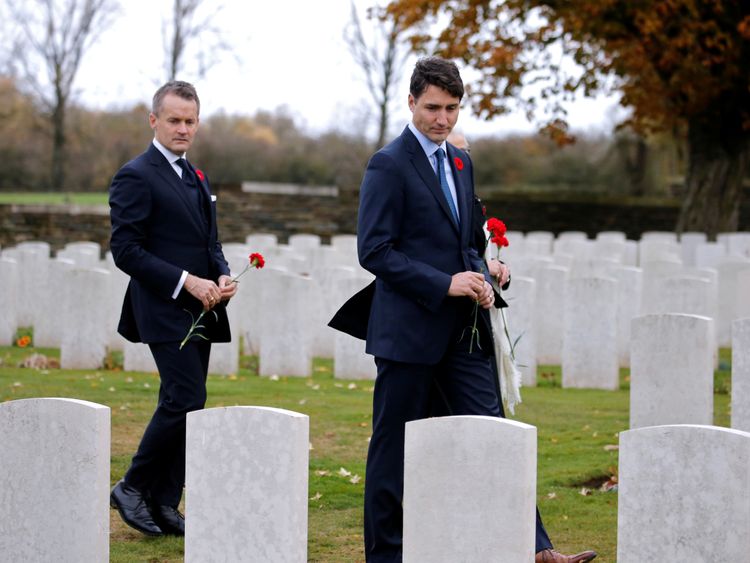 He walked among the gravestones at the Canadian Cemetery number 2, where 820 casualties are buried.

Memorial events will be held across the world to mark 100 years to the day since the guns fell silent. 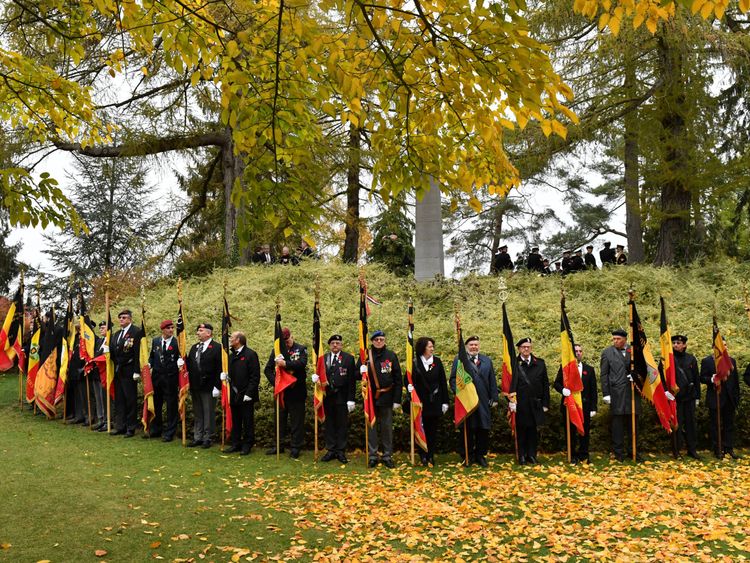 In London, Big Ben will strike even though the clock tower has been undergoing conservation works, and the bell has not been rung. 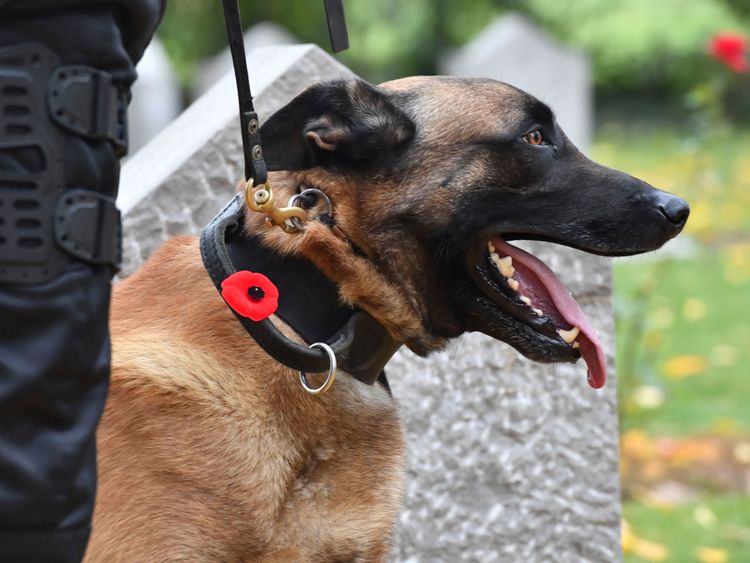 The Queen and members of the Royal Family will attend a service of commemoration at the Cenotaph in London.

She will lay flowers on the grave of the unknown soldier and Prince Charles will read passages from the Bible during the service.

A total of 60 heads of state will convene in Paris on Sunday for a programme of memorial events followed by lunch at the Elysee Palace and the opening session of the Paris Peace Forum.

Two services will take place at the Menin Gate in Ypres. 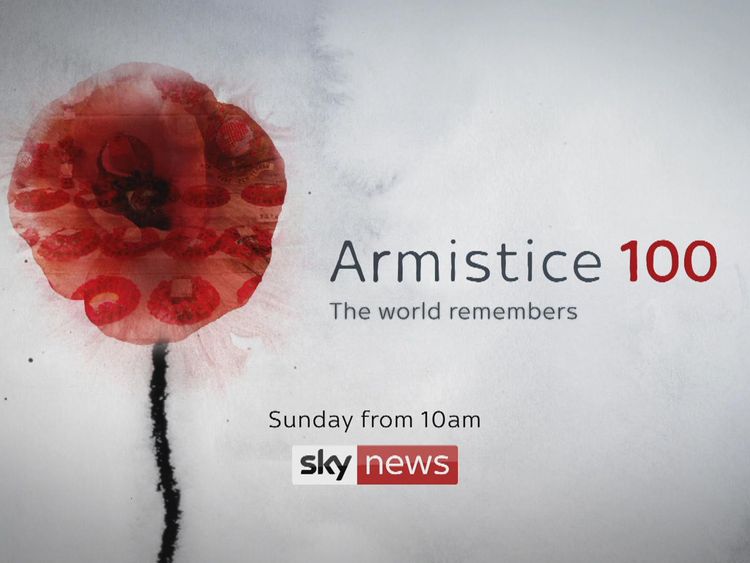