Trump attorney at Mar-a-Lago during raid says agents were ‘respectful’ but fears DOJ will push ‘bogus charges’, insists there is nothing criminal in documents and suggests FBI could have ‘planted’ evidence

An attorney for Donald Trump who was present when FBI agents were seizing documents from Mar-a-Lago claims the Department of Justice (DOJ) may pursue ‘bogus charges’ against her boss in a pair of Tuesday interviews.

Lawyer and TV host Christina Bobb made the accusation without offering any specific details during a pair of interviews on far-right, Trump-friendly networks the day after the former president’s home was raided by federal agents.

The unannounced operation was linked to records sought by the National Archives, his son, Eric Trump, told Fox News that night.

Bobb told Right Side Broadcasting Network (RSBN) that agents were ‘respectful’ but insisted no crime on the former president’s part.

‘They were respectful and as far as I can tell, put everything back where they found it except for what they took. But, yeah, I mean, they went through everything,’ she said, adding: ‘There was a lot of them.’

When asked on Real America’s Voice whether evidence could have been ‘planted,’ Bobb replied: ‘There is no security that something wasn’t planted.’

‘I’m not saying that’s what they did,’ the attorney followed-up.

Bobb also confirmed to RSBN that hardly anyone was present on the grounds save for herself and ‘at least one other’ attorney. 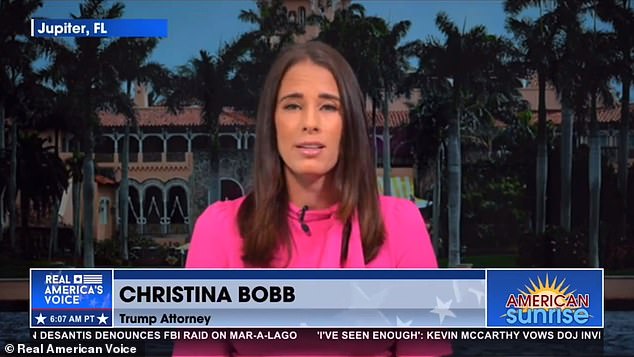 Christina Bobb, a lawyer for Trump and a host on One America News Network, admitted that some of the documents federal agents recovered could be ‘classified’ but quickly added that she believes they are not of any consequence

‘Nobody really expected this to happen because President Trump himself, as well as his legal team, have been very cooperative with everything the FBI and the Department of Justice have wanted to do’,

‘They’ve allowed the FBI and DOJ on the  premises before. you know, let them see whatever it was that they wanted to see. So the raid was really unnecessary and a bit overkill considering we had never withheld anything from them in the past.’

The former president was at Trump Tower in New York City at the time.

It was revealed in May that the DOJ was investigating whether Trump mishandled classified documents.

The National Archives asked the federal government to look into the matter after it recovered 15 boxes of files, some of which were labeled ‘top secret,’ from Mar-a-Lago earlier this year. The Archives said they were meant to be turned over when Trump left office in January 2021.

Federal investigators made a rare in-person visit to Mar-a-Lago in June where they asked to see the room where documents were being kept and spoke to staff about how they were handled, according to CNN.

It’s not certain what federal agents were looking for on Monday or what they specifically recovered – but Bobb claimed there was nothing of consequence left at Trump’s Florida retreat.

‘We went through everything and there wasn’t anything of substance in there. So if they try to claim that there was something really damning, that that will be very concerning to me,’ the lawyer and One America News host said.

‘However, I think it’s more likely than not that they will come up with a bogus charge with little to no evidence.’

She suggested there could be some files recovered labeled ‘classified secret’ but hastily added she believes they would have ‘no significant meaning.’

Both pro-Trump and establishment Republicans have united with their outrage over the raid, while Democrats have cheered it as an important step toward holding the ex-president accountable.

Trump himself released a lengthy statement on Monday night publicly revealing the raid and claiming he is a victim of political persecution.

‘These are dark times for our Nation, as my beautiful home, Mar-A-Lago in Palm Beach, Florida, is currently under siege, raided, and occupied by a large group of FBI agents,’ Trump said through his Save America PAC.

‘I stood up to America ’s bureaucratic corruption, I restored power to the people, and truly delivered for our Country, like we have never seen before. The establishment hated it. Now, as they watch my endorsed candidates win big victories, and see my dominance in all polls, they are trying to stop me, and the Republican Party, once more. The lawlessness, political persecution, and Witch Hunt must be exposed and stopped.’