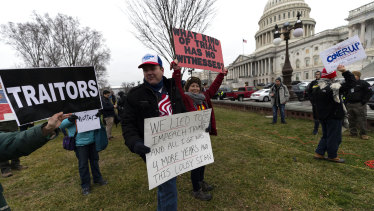 Activists gather at the Capitol after the impeachment acquittal of US President Donald Trump.Credit:AP

“If a president does something which he believes will help him get elected in the public interest, that cannot be the kind of quid pro quo that results in impeachment,” Mr Trump’s lawyers told the Senate. By that logic, the president is sheltered from allegations of criminality or misdemeanour if he believes that an act will facilitate his election and that his election is in the public interest. It implies that anything goes when it comes to getting re-elected.

The Democrats are demoralised. Despite the impeachment being doomed from the outset, they were obliged to pursue it. To have done nothing in the face of those allegations would have been equivalent to sanctioning such conduct. In this election year, these are worrying times for the Democrats. The American economy is strengthening and unemployment is falling, while the US has been increasing its power and influence on the world stage.

As the Democrats regroup, they must refocus on getting behind a strong candidate to contest the presidency in November. They have spent recent months attempting to discredit Mr Trump personally rather than providing America with a clear choice for a different future. Mr Trump may be a mendacious president who has threatened, undermined and vilified important aspects of the US democratic system and its supporting institutions, but the reality is that he now looks likely to make a clear run for a second four-year term at the November elections.