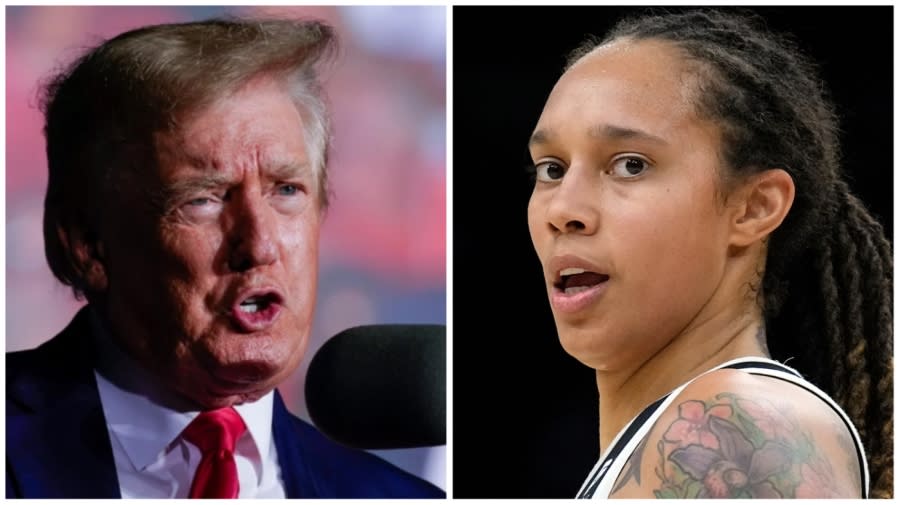 Former President Trump attacked Brittney Griner, the women’s professional basketball player who was freed on Thursday after spending nearly a year in Russian captivity as part of a prisoner swap deal with the Biden administration.

“What kind of a deal is it to swap Brittney Griner, a basketball player who openly hates our country for the man known as ‘The Merchant of Death,'” Trump wrote in a post on his conservative social media website Truth Social.

The former president suggested Paul Whelan should have been freed instead of Griner. Whelan is a former Marine with citizenship in four nations, including the U.S., who was arrested in Russia in 2018 on espionage charges convicted in 2020, receiving a 16-year prison sentence.

What a stupid and unpatriotic embarrassment for the USA!Donald Trump

“What a stupid and unpatriotic embarrassment for the USA!” Trump wrote.

Griner, who was arrested in February for bringing vape cartridges with hashish oil into the country, was released in exchange for Viktor Bout, an infamous Russian arms dealer serving a 25-year sentence for conspiring to kill Americans, leading many critics of President Biden’s administration to say Russia got the better end of the trade.

Trump has a history of attacking professional athletes who are outspoken on issues of racial justice, equality and police brutality. He made attacking former NFL quarterback Colin Kaepernick a hallmark at his campaign rallies when he first ran for president.

Griner, a center for the Phoenix Mercury, told the Arizona Republic in 2020 that she does not believe the national anthem should be played before WNBA games.

“I don’t mean that in any disrespect to our country. My dad was in Vietnam and a law officer for 30 years. I wanted to be a cop before basketball. I do have pride for my country,” Griner said.

Griner’s release Thursday was widely seen as a major win for Black women in America, with many leading gender and racial justice advocates at the forefront of seeing the WNBA star’s release and keeping the pressure on Biden’s administration to bring her home.

For the latest news, weather, sports, and streaming video, head to The Hill.