Washington: Just a month away from the November 3 presidential election, Donald Trump and wife Melania have tested positive for COVID-19, throwing an already tumultuous campaign into chaos.

The eternal phrase used in US election campaigns – "October surprise" – doesn't begin to describe such a dramatic and disturbing development. 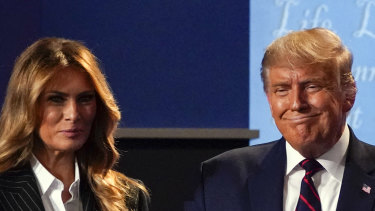 The biggest immediate concern, of course, is the health of the President and the first lady. At 74 and overweight, Trump is in a high-risk category for the new coronavirus.

If he became too unwell, Vice-President Mike Pence will act in his place.

Only a few hours before announcing his diagnosis on Twitter, Trump was giving an interview on Fox News sounding full of vigour. But it can take several days after a COVID-19 diagnosis for people to start feeling unwell.

The Trumps' positive diagnosis came after it was revealed that Hope Hicks, one of the President's closest advisers, had contracted the disease. This raises questions about how extensively the virus has spread throughout the White House and why health protocols failed to stop it from reaching the country's most powerful person. 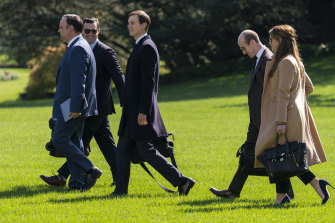 Since the earliest days of the pandemic, Trump and other members of his administration have taken a cavalier approach to the pandemic. He said it would "miraculously" disappear and compared it favourably to the seasonal flu. He shunned mask-wearing for months and ridiculed his Democratic opponent Biden for wearing one. He held packed rallies, some of them indoors, against the advice of health experts and local officials. He sidelined top scientists like Dr Anthony Fauci and hyped up unproven miracle cures. He questioned the usefulness of widespread testing on the grounds that more tests produce more cases.

Even if Trump does not develop symptoms, he is likely to remain grounded in Washington for two weeks in quarantine. This will be torture for a man who feeds off the energy of his campaign rallies.

Trump would have expected to hold dozens of campaign events over the next fortnight – including the second presidential debate, scheduled for October 15. It's unclear if the debate will go ahead, or if it would be possible to hold it on Zoom or another virtual platform.

So much is unclear – except the fact that the election has changed irrevocably.

Our weekly newsletter will deliver expert analysis of the race to the White House from our US correspondent Matthew Knott. Sign up for the Herald‘s newsletter here, The Age‘s here, Brisbane Times‘ here and WAtoday‘s here.