Cohen, who once wrote that he “took a weird kind of pleasure in harming others in the service of Donald Trump,” has spent the last few years building a cottage industry around attacking his former boss. 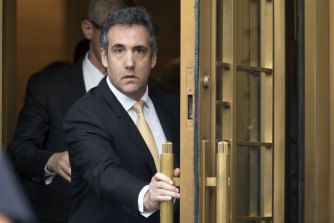 Now, freed of any court-ordered constraints, the ever-restless former attorney is aiming to raise his profile further.

He’s working on another book, a follow-up to Disloyal, which he wrote in prison and sold more than 1 million copies, including audiobooks and electronic versions. He has a podcast called Mea Culpa, which features interviews with lawyers and Trump critics, among them the adult film star whose 2016 payoff spurred the investigation that sent Cohen to jail.

The podcast has been averaging more than 300,000 downloads per week, according to recent data from Audacy. 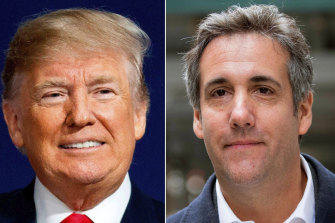 “I look forward to rebuilding my life, one day, one client at a time,” Cohen said in an interview. “This time I’m going to be more selective about who I work with.”

He says he’s fielding offers for speaking engagements and public appearances, and he and his agent have been in discussions with media companies about a documentary, along with a TV or radio show focused on the political climate in the US.

Last month, he was spotted meeting for a second time with Kanye West. He declined to say what the meeting was about.

For the past year, Cohen has also been advising business figures, whom he wouldn’t name, about how they could improve their public image. Asked if that means he’s returning to his role as a “fixer,” Cohen responded: “You could say that.”

“Michael is going to have a lot of avenues to pursue,” said Donny Deutsch, a television personality and branding professional. “The prison record will always be part of his brand and will limit him in the corporate world, but as an entrepreneur, Michael Cohen Inc. has great potential.”

A spokeswoman for Trump had no immediate comment about Cohen.

The last time he offered his services as a consultant, Cohen was on top of the world. His boss of almost a decade had just won the presidential election. Cohen was in demand as an adviser who could help global companies like Novartis AG and AT&T Inc. understand the new president. In 2017, he raked in close to $US5 million in consulting fees.

Cohen first entered Trump’s orbit in 2006, at a time when the future president had risen to new heights of stardom through the reality TV series The Apprentice.

Cohen helped Trump resolve a couple of thorny business problems. Within a year, Trump hired Cohen away from the law firm where he was practicing and brought him in-house, as a full-time fixer.

Among his fixes was paying $US130,000 in 2016 to Stormy Daniels, the adult film star who claimed to have had sex with Trump a decade earlier. Federal prosecutors launched an investigation into the payments, raiding Cohen’s home and office and seizing his digital devices and records.

About four months after the raid, Cohen’s lawyer said prosecutors were going to file an 85-page indictment against him and his wife unless he agreed to plead guilty within three days.

Cohen pleaded guilty to all charges and was sentenced to prison. He also cooperated with special counsel Robert Mueller’s investigation of Russian interference in the 2016 election, prompting Trump label him a “rat”.

Excommunicated from Trump’s world, broke, hated and imprisoned, Cohen started writing his book. Disloyal was published in September 2020 and was an instant bestseller. A month later he began his podcast.

Each episode of the podcast opens with Cohen riffing for 10 to 15 minutes on the news topic of the day, followed by a one-hour interview with a guest, usually someone with ties to Trump or an interest in him. The show closes with a five-minute session in which Cohen admits to something bad that he has done in the past.

“It’s a great way for a Jew to offer confession, without having to go to church,” he said.

Along with regrets, Cohen also has complaints: He regularly rails about his alleged mistreatment at the hands of his prosecutors and the judge in his case, and asks why he was charged for campaign finance violations but Trump — identified as “Individual-1″ in court filings — was not.

At the same time, Cohen savours the fact that the Manhattan district attorney launched his criminal investigation of Trump and the Trump Organisation based in part on evidence from his federal case. He has been interviewed multiple times by lawyers from the DA’s office, as well as from the office of the New York attorney general, who is conducting a parallel civil inquiry.

“Donald Trump deserves to be held accountable for all of his dirty deeds and criminal activities,” said Cohen. “Nothing more, nothing less.”

In May of 2020, Cohen became one of one of many federal inmates — including former Trump campaign chair Paul Manafort — released to home confinement because of the pandemic. The Bureau of Prisons briefly re-incarcerated him in July amid an apparent battle over his media presence, but since then he’s been living with his wife in their Manhattan apartment. It’s an arrangement infinitely better than bunking in the Otisville Correctional Facility in upstate New York with other felons, but still not total freedom.

Under terms of his release, he was allowed only two hours outside of his Park Avenue apartment per day. He wore an ankle monitor for the first few months after leaving prison. After it was removed, he would get calls in the middle of the night several times a week, checking to make sure he was in his apartment. He would then have to take a photo of himself on the spot and send it to his minders as proof of his whereabouts.

Even during his limited time outside his apartment, he still met the wrath of Trump supporters, including one incident where a woman cursed him out in Central Park. Cohen says he gets mountains of hate-mail from Trump fans.

“He belongs in the cell next to his good friend Michael Avenatti,” said Miller, a reference to the celebrity lawyer who represented Stormy Daniels and was sentenced to 2 1/2 years in prison for attempting to extort Nike.

Since first tasting fame at Trump’s side, Cohen has become adept at grabbing the media spotlight, and he closely follows his own news coverage. The strangest thing that’s happened to him took place in March, when he was surfing the internet and came across a “breaking news” flash reporting his untimely death, apparently by suicide.

The hoax startled him, but in one sense it was true: the old Michael Cohen, the fixer and fabricator who idolised Donald Trump and did whatever the boss wanted him to do, no matter how dirty, is dead and buried. The new one is ready for what’s next.