Outback Wrangler star Matt Wright has been charged by Northern Territory police over a helicopter crash that killed his mate this year.

An arrest warrant was issued on Monday by Northern Territory police for Wright, 43, to present to Darwin officers as part of their investigation into the death of Chris “Willow” Wilson.

Wilson died during a failed crocodile-egg-collecting mission when the helicopter he was in crashed in West Arnhem Land in February.

On Tuesday afternoon, Wright was charged with attempting to pervert the course of justice, destruction of evidence, fabricating evidence, two counts of unlawful entry, interfering with witnesses and making a false declaration. Two other men have already been charged over the crash.

This masthead understands Wright plans to fight the charges.

He was seen at Sydney Airport on Tuesday with wife Kaia and their newborn daughter before they boarded a flight to Darwin. 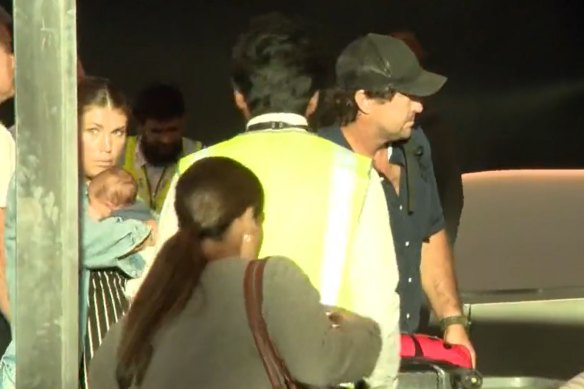 The family arrived in Darwin about noon, where Wright’s minders jostled with waiting media, pushing past cameras to a Range Rover. A television cameraman was knocked to the ground during Wright’s exit from the airport.

Wright then made his way to a police station.

Wright did not respond to questions from reporters at Sydney and Darwin airports, but his production team said on Monday he “strenuously denies any wrongdoing”.

Outback Wrangler centred on Wright, a helicopter pilot and crocodile wrangler, and friends Wilson and Jono Brown, who relocated dozens of crocodiles in the Australian Outback.

Wilson’s body was found 40 metres from the main helicopter wreckage.

The father of two was attached to a line using a harness so he could harvest eggs from crocodile nests. The crews of two other helicopters found Wilson after he and his chopper’s crew failed to respond to radio calls.

The pilot, Sebastian Robinson, was seriously injured and airlifted to Maningrida.

An investigation into the crash indicated Wilson’s helicopter had struck and cut through a tree trunk multiple times.