Two people have been killed by a falling tree as they drove in Cockatoo, south-east of Melbourne, Victoria Police believe.

The pair were driving along Woori Yallock Road about 10.30am, Friday when a tree is believed to have fallen on their car. 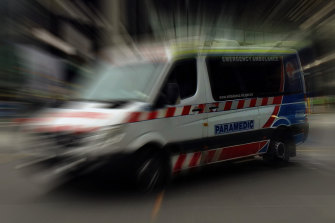 Stock photo of an ambulance.Credit:Paul Rovere

“Sadly, the two vehicle occupants died at the scene,” a police spokesperson said.

Ambulance Victoria said paramedics were called to the scene about 10.35am on Friday.

Woori Yallock Road is closed in both directions between Avon Road and Rainy Hill Road as a result.

Police will prepare a report for the coroner.