Two people smugglers led the 1,500-strong protest in Parliament Square at which an Albanian flag was draped over Winston Churchill’s statue after Suella Braverman said Britain faced an ‘invasion’ of illegal migrants

The two organisers of a protest at which Albania’s national flag was draped over a monument to Sir Winston Churchill are convicted people traffickers, The Mail on Sunday can reveal.

They also led Albanian independence day celebrations that saw a convoy of luxury cars bring central London to a standstill and are plotting further protests this month.

Last month Enkeleid Omi, 49, told reporters: ‘We thought it was useful for our community to show we are not what we are called. We are not criminals. We are not invaders.’ 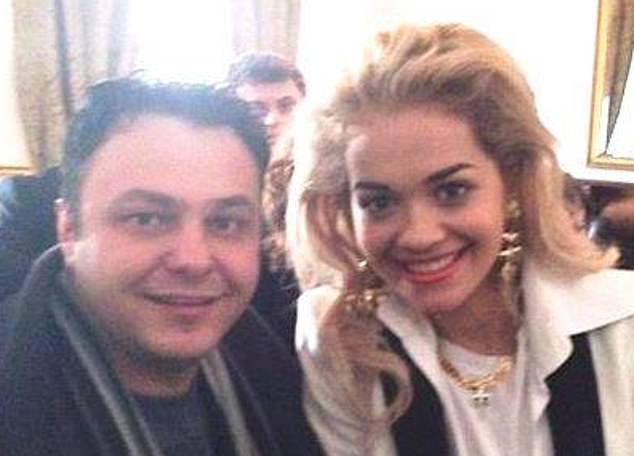 The Omi brothers pleaded guilty in 2015 of attempting to smuggle an Albanian woman into the UK, and that they themselves had arrived in the UK illegally. Taulant Omi (left) has regularly attended drinks receptions at the Albanian embassy in London and was even pictured with popstar Rita Ora at an event on 4 February 2014

But this newspaper can reveal that the Omi brothers pleaded guilty in 2015 of attempting to smuggle an Albanian woman into the UK, and that they themselves had arrived in the UK illegally.

Albanian nationalist Taulant, 46, also claimed he was from war-torn Kosovo in order to claim asylum in the UK.

His application was refused but he won an appeal in 2006 and later acquired British citizenship.

The Omi brothers whipped up protests after Ms Braverman promised to crack down.

More than 12,000 Albanians have crossed the English Channel this year. Many are seeking asylum despite the fact Albania is a safe, war-free country.

Their march sparked fury after protesters draped Albania’s flag over the statue of Churchill in Parliament Square. Taulant gave an impassioned speech.

He posted on social media ahead of the protest that demonstrators would ‘get together and peacefully show them that we are not criminals’.

But the brothers and another accomplice were caught by Border Force officers attempting to bring people into the UK illegally in May 2013.

They were found guilty at Canterbury Crown Court in September 2015 and were both given 12-month prison sentences, suspended for 18 months, and ordered to carry out 200 hours of community service. 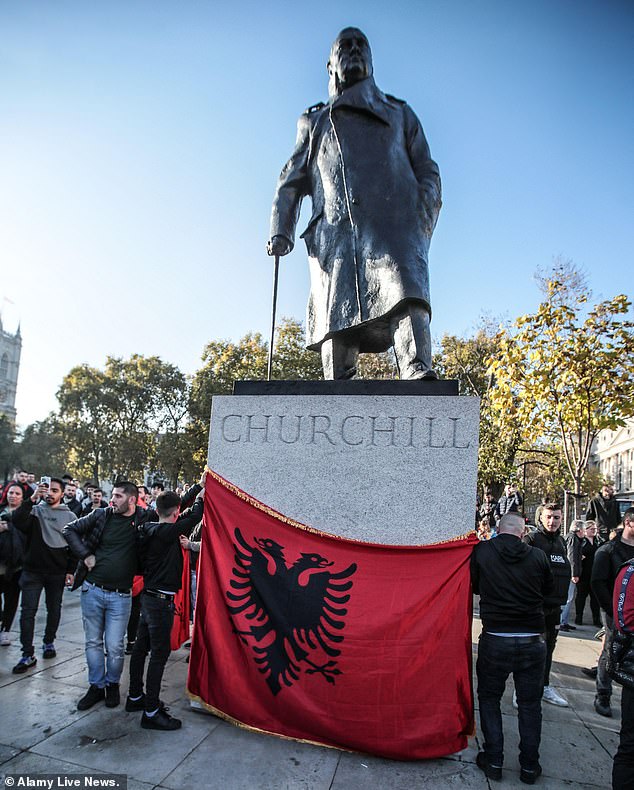 The 1,500-strong march sparked fury after protesters draped Albania’s flag over the statue of Churchill in Parliament Square

Last night Tory MP Sir John Hayes said: ‘It is a bitter irony that those who disgrace themselves by demeaning our great war hero Churchill while claiming to be innocents are in fact villainous crooks. We should be deporting all foreign criminals and those who breach our borders with impunity.’

The Omi brothers, who were born in Shkoder in northern Albania, now live in Bedford.

They are influential figures in the Albanian community in the UK. Taulant, a builder, was pictured with pop star Rita Ora at an event in February 2014.

Last night Taulant initially denied he was prosecuted in 2015, suggesting that Taulant Omi was his nickname and his only relationship with Enkeleid was as ‘another organiser’.

But after being presented with further evidence he said: ‘Our protest is against racism towards the Albanian community which started with the statement of Suella Braverman. No matter what the past of certain persons, no one has the right to show and support racism towards a whole community.’

Enkeleid did not respond. A Home Office spokesman said: ‘We value our Albanian community.’