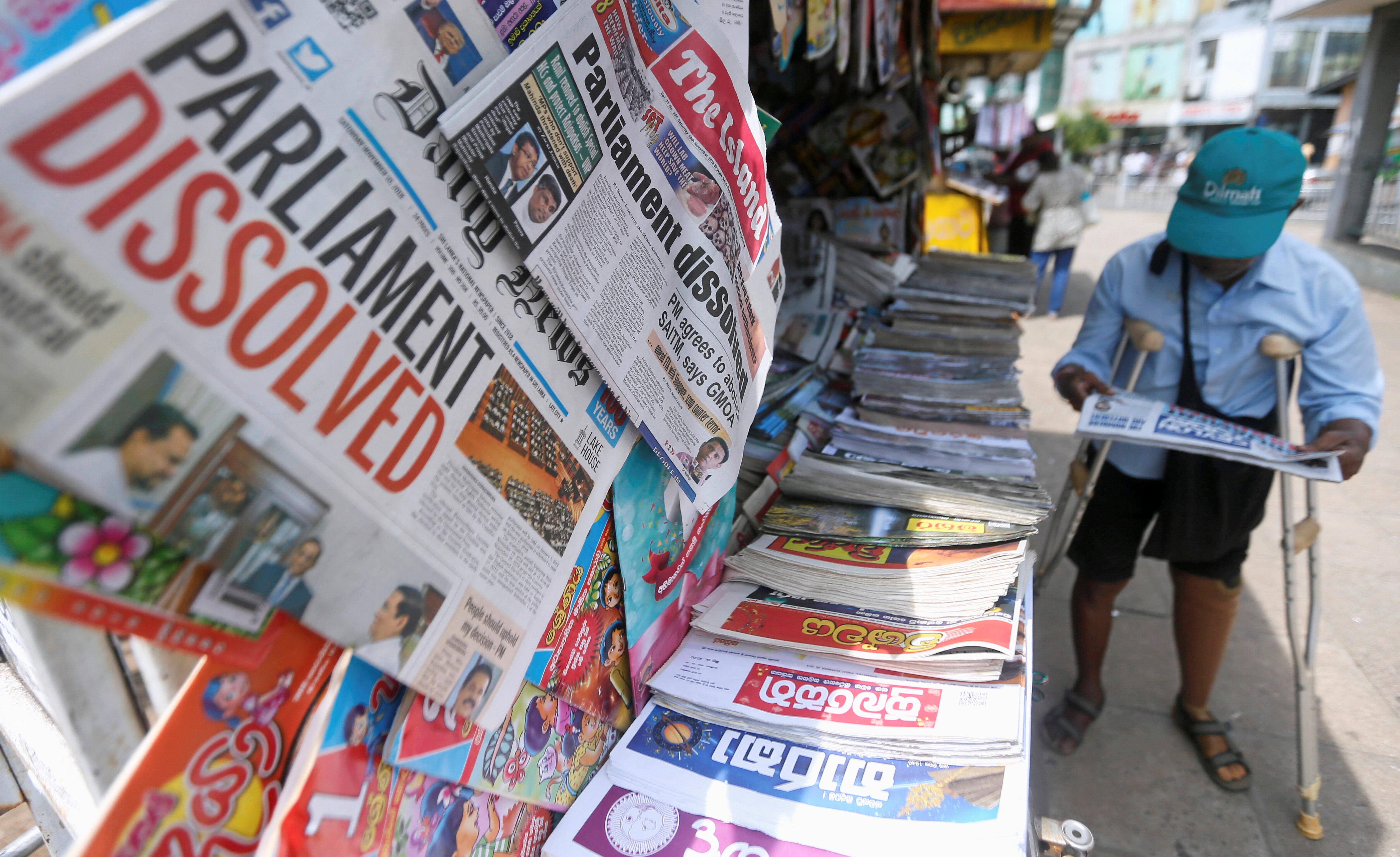 Sirisena dissolved parliament on Friday night, only five days before it was due to reconvene and he was in danger of losing a vote of no confidence. He has also called a general election for Jan. 5.

The president triggered an intense power struggle when he sacked prime minister Ranil Wickremesinghe late last month and appointed the island’s former leader, Mahinda Rajapaksa, a pro-China strongman ousted by Sirisena in 2015, in his place.

Sirisena’s rivals are set to challenge his decision, which they describe as illegal and unconstitutional, in the Supreme Court on Monday.

The U.S. Bureau of South and Central Asian Affairs said in a tweet that the United States was “deeply concerned by news the Sri Lanka Parliament will be dissolved, further deepening the political crisis”. It said democracy needed to be respected to ensure stability and prosperity.

Mark Field, the British minister of State for Asia and the Pacific, tweeted his concern about the dissolution of parliament days before it was due to be reconvened.

“As a friend of Sri Lanka, the UK calls on all parties to uphold the constitution and respect democratic institutions and processes,” Field said.

Canada’s Foreign Policy twitter feed said that it was “deeply concerned” about the decision and referred to the risks to reconciliation work after the nation’s civil war.

“This further political uncertainty is corrosive to Sri Lanka’s democratic future and its commitments on reconciliation and accountability,” it said.

Australian Minister for Foreign Affairs Marise Payne expressed both concern and disappointment in a statement, saying the move “undermines Sri Lanka’s long democratic tradition and poses a risk to its stability and prosperity”.

Sirisena has said he fired Wickremesinghe because the prime minister was trying to implement “a new, extreme liberal political concept by giving more priority for foreign policies and neglecting the local people’s sentiment”.

India and the West have raised concerns over Rajapaksa’s close ties with China. Beijing loaned Sri Lanka billions of dollars for infrastructure projects when Rajapaksa was president between 2005-2015, putting the country deep into debt.

Wickremesinghe refused to vacate the official prime minister’s residence saying he was the prime minister and had a parliamentary majority.

Before he signed the papers dissolving parliament and calling the election, Sirisena appointed allies of his and of Rajapaksa to cabinet positions.

Independent legal experts have told Reuters that parliament could be dissolved only in early 2020, which would be four-and-half-years from the first sitting of the current parliament. The only other legal way would be through a referendum, or with the consent of two thirds of lawmakers.

Given those views, it was not immediately clear how Sirisena is on legal safe ground by dissolving parliament, though his legal experts have said there are provisions for him to do so.