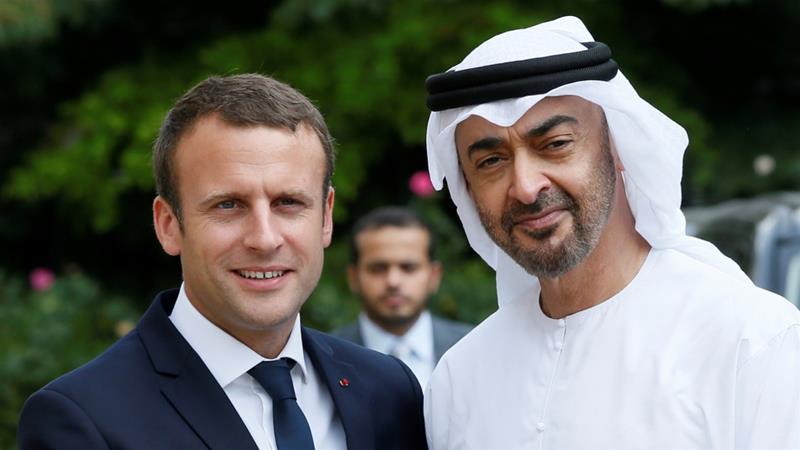 A French rights group has sued Abu Dhabi Crown Prince Mohammed bin Zayed al-Nahyan for his alleged involvement in the war in Yemen.

Alliance for the Defence of Rights and Freedoms (AIDL) accused Al-Nahyan of war crimes, complicity in torture and inhumane treatment in Yemen.

“It’s in this capacity that he has ordered bombings on Yemeni territory,” the complaint filed by French lawyer Joseph Breham said on Wednesday, according to Reuters news agency.

The lawsuit was filed in a Paris court during Al-Nahyan’s visit to France.

The complaint against Abu Dhabi’s crown prince cites a report by United Nations experts that said coalition attacks may have constituted war crimes and that torture was carried out in two centres controlled by Emirati forces.

The United Arab Emirates (UAE) is one of the coalition countries heavily involved in the war in Yemen, where it regularly takes part in bombing raids.

One of the cases referred to in the lawsuit is the bombing of a building in the Yemeni city of Sanaa in 2016 when a wake was taking place for the father of the Houthi administration’s interior minister.

The complaint is similar to one filed in April against Saudi Crown Prince Mohammed bin Salman during his visit to France.

French prosecutors are currently looking at that lawsuit in a legal process that is expected to last a year.

France is a close ally of both the UAE and Saudi Arabia, which heads a coalition fighting the Iran-aligned Houthi rebels who control most of northern Yemen and the capital Sanaa.

Over the last couple of weeks, however, pressure has grown on President Emmanuel Macron over French arms sales to the two Gulf countries.

France also has a military base in Abu Dhabi, which it opened in 2009.

Western countries have provided arms and intelligence to the Arab states in the alliance, but have shown increasing reservations about the war since the murder of Saudi journalist Jamal Khashoggi at the kingdom’s consulate in Istanbul last month.

In recent weeks, several Western countries have called for a ceasefire to end the nearly four-year-old war that has killed more than 10,000 people, and caused the world’s most urgent humanitarian crisis.

UN agencies say up to 14 million Yemenis are at risk of starvation if the port of Hodeidah is closed by fighting or damage.