London: A gunman has shot and killed five people, including a little girl, in a rampage in the city of Plymouth in southwest England, in an incident described by Britain’s Home Secretary as “shocking”.

Police called to the scene at a house in the Keyham area of Plymouth just after 6pm Thursday night (AEST) found two females and two males dead at the scene. According to a police spokesman, a man believed to be the gunman was also dead on the scene – although they did not say if he killed himself or had been shot by police. All are believed to have died from gunshot wounds.

“Another female treated at the scene for gunshot wounds, died a short time later in hospital,” the spokesman said. He echoed commends by local MP Johnny mercer that the incident was not terrorism-related. 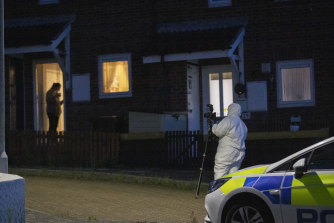 Witnesses said the gunman kicked in the door of the house before shooting the residents. Credit:Getty

Local media outlet Plymouth Live is reporting that one of the victims is believed to be a girl under 10.

After videos started circulating on social media, showing a body under a blood-stained sheet on the pavement, he asked the public not to share the footage “and to respect those families who have lost loved ones this evening”.

Sharron Turner, 57, who lives behind the scene of the shooting, told The Times that a gunman had “kicked in” the front door of a semi-detached house before shooting a young mother and her daughter, who was aged about five. Turner said she had been told that the man, who was dressed in black and grey, was armed with a semi-automatic weapon.

After the attack the gunman escaped through a park behind the house and shot two dog walkers, The Times reported.

Turner told the BBC: “Firstly, there was shouting, followed by gunshots. Three, possibly four to begin with.

“This was when the shooter kicked in the door of a house and randomly started shooting … he ran from the house shooting as he ran and proceeded to shoot at a few people in Linear Park up from the drive.”

“The incident in Plymouth is shocking and my thoughts are with those affected,” Home Secretary Priti Patel said on Twitter. 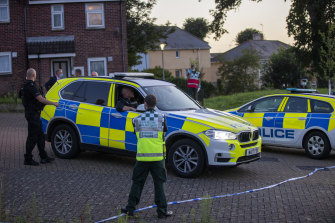 Police have indicated there are people injured as well as multiple people dead. Credit:Getty

Robert Pinkerton, 54, told Plymouth Live that he was on Henderson Place when he heard a loud bang. He turned a corner and bumped into a man, and “swerved” when he saw the gun.

He said he saw an injured woman in the doorway of a hairdressers and witnessed a man trying to give her medical attention.

The United Kingdom has one of the lowest gun homicide rates in the world, and mass shootings are rare.

Protesters are now attempting to block roads at the Port of Dover ferry terminal after being banned from causing chaos on the M25. Around 40…