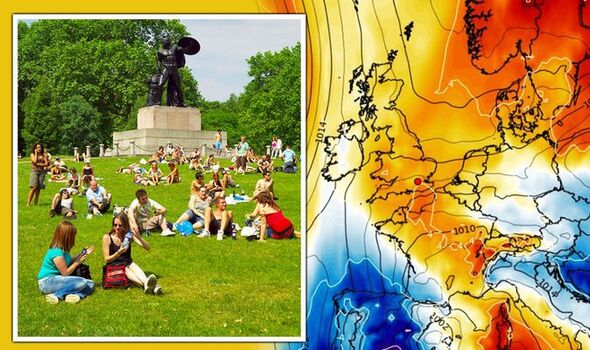 A frosty U-turn in the weather will bring the glorious sunshine and 23C temperatures recorded over Easter to a shivering halt. Thermometers will nosedive through the rest of this week amid forecasts icy winds, gloomy skies and even the odd snow flurry will grip the UK into May. Britons should make the most of the last few hours of the Easter mini-heatwave before frosty mornings and jumpers make a return.

Jim Dale, meteorologist for British Weather Services, said: “The rest of the month will be on the cool side with the odd frost in exposed regions.

“I now see no return to anything exciting in terms of warmer temperatures until May or even later.

“Unfortunately, we are going to have to wait for another spell of warmth like we saw over Easter.”

Heat ploughed into the atmosphere after the Easter mini-heatwave will later this week erupt into thundery downpours.

However, high pressure stretching over Scandinavia will keep rain at bay while drawing cold winds in from the east, Mr Dale said.

He added: “There may be some showers around with an isolated thunderstorm, and this will be driven by the heat from the weekend making the atmosphere unstable.

“Other than that, it will be dry, and with high pressure over Scandinavia which then elongates over the UK, a cooler airflow will come in from the east.

“This will make it cooler through the rest of April.”

Overnight lows will dip to freezing in Scotland while chilly winds will make it feel even colder as the highlands get a dusting of snow.

Long-range weather forecasters warn not to raise hopes for the start of May with further cool, ‘gloomy’ weather on the cards.

James Madden, forecaster for Exacta Weather, said: “May is slightly tricky to forecast at the moment, but on current indications things appear to stay changeable.

“The current outlook, certainly into the start of the month, is for more gloomy, cloudy weather with showers likely to set in for many.

“While there may be the odd burst of warm weather for a day or two, the outlook at the moment is for an unsettled and chilly start to the month.”

Britain will turn chilly from today as the Scandinavia high-pressure system drags icy gusts along the east coast.

Showers will dampen spirits in parts of the country although many can look forward to one last blast of sunshine.

Met Office meteorologist Steven Keates said: “As we move through Wednesday we will see less in the way of cloud and more in the way of sunshine.

“A few showers are possible, but all in all, Wednesday does not look like a bad day, and for most of us it will be warmer too with temperatures widely in the mid- to upper-teens with perhaps a 19C or 20C cropping up somewhere across southern Britain.”

A huge storm system about to unleash a deluge across France will just miss Britain thanks to high pressure over northern Europe.

Mr Keates said: “There is a large area of high pressure over Scandinavia which will deflect a region of low-pressure across Biscay.

“For the rest of the week this brisk easterly winds will come off a chilly North Sea and will certainly peg the temperatures back.”

John Hammond, meteorologist for weathertrending, said: “The upshot for us is a cooler and damper end to the month than many of us would have hoped for.

“The good news is that nothing can stop the strengthening of the sunshine at this time of year, and it may be that north-western parts of the UK continue to see the best of the dry and sunny weather.”