Monday will bring Wales and Northern Ireland a bright and sunny start, while the rest of the UK will be relatively cloudy with sunny spells, generally. Things are looking a bit more damp in the east, though, with some heavy showers and chilly wind.

The north will get chilly as well towards Monday night, while in the south-west there will be some local heavy wind and maybe even some thunder during the night.

But for the north, Tuesday is looking largely sunny and dry.

Wednesday and Friday will see temperatures climb, with Wednesday being particularly sunny around London.

On Friday, the city could experience a high of around 22C, according to WX Charts – the same as Nice in south-east France. 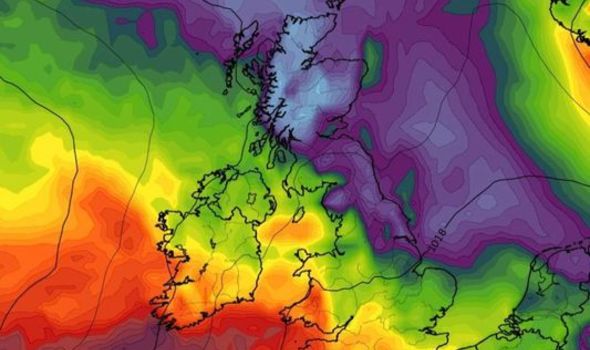 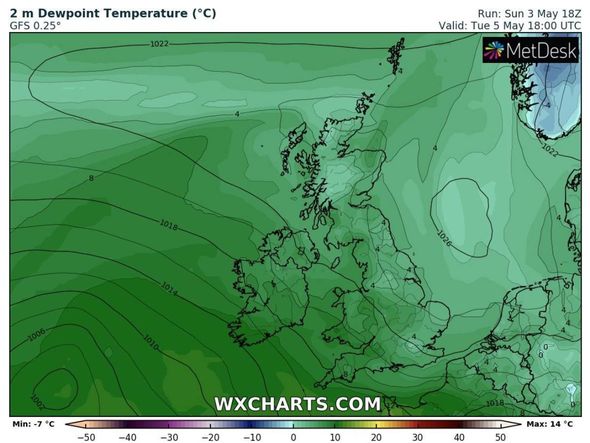 It’s set to be hottest around 4pm, though the air will still be warm into the late evening – around 16C.

The Met Office said on its website: “A bright and sunny start for Wales and Northern Ireland otherwise fairly cloudy with some sunny spells for most. Some showers over eastern England, with some heavy ones this afternoon.

“Tonight will be chilly in the north with a local frost. Cloudier and windier in the far southwest with local gales as well as heavy rain and perhaps thunder later in the night.

“Tuesday is sunny and dry for most northern parts. Heavy rain, strong winds and perhaps some thunder to start in the southwest, easing later in the morning. 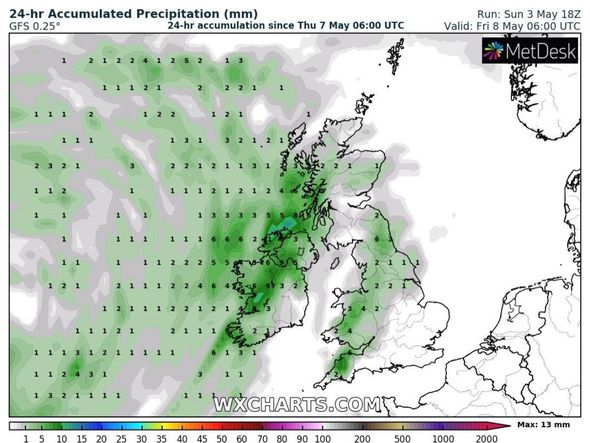 “Outlook for Wednesday to Friday includes a few showers continuing in the west Wednesday and Thursday, perhaps developing more widely on Friday. Otherwise mostly dry and warm with sunny spells.”

A spokesman for Netweather added high pressure will bring sunny spells towards the end of the week.

They said: “High pressure will build in from the north on Monday, bringing a largely dry day with sunny spells, though a few showers are likely across northern and eastern England, especially in the morning.

“Tuesday will likely see a frontal system with outbreaks of heavy rain try to push in across the south against high pressure establishing across the north. 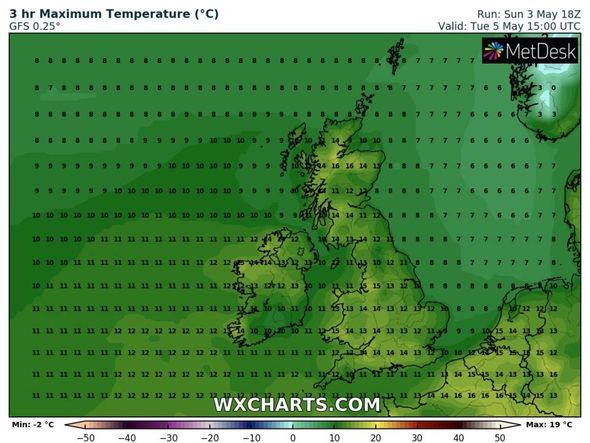 “Cloud and rain (will) ease back to the near continent by Wednesday, with high pressure close to or over the UK dominating the weather for the rest of the week, so Wednesday and Thursday mostly dry and fine with sunny spells, warmer too with light winds.

“Most looking dry on Friday too, but we may see showers arrive in the west as high pressure begins to retreat, but some uncertainty on this.”

Pollen counts will generally be low throughout the week until Thursday, particularly in the north – though a medium count is reported for much of the south on Wednesday as temperatures climb.

So for some parts of the UK, this week will see a return to April, which was the sunniest April on record for the UK. 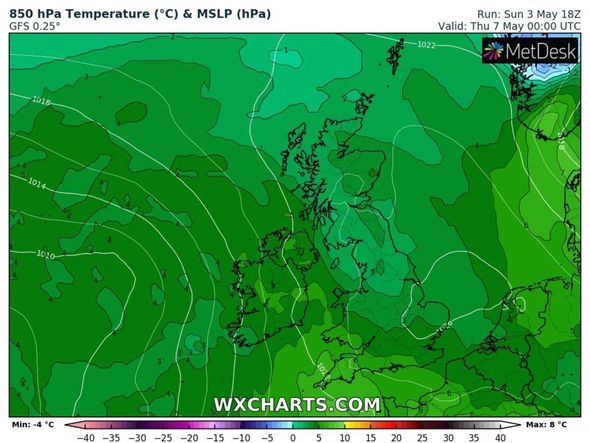 And this wasn’t specific to one region; the Met Office has said that all countries in the UK made it in the top five sunniest records in a series from 1929.

England, Scotland and Northern Ireland had their sunniest April.

This beat the previous record set in 2015 for England and Northern Ireland, and 1942 for Scotland.

Wales recorded its third sunniest April behind 2007 and 2015. 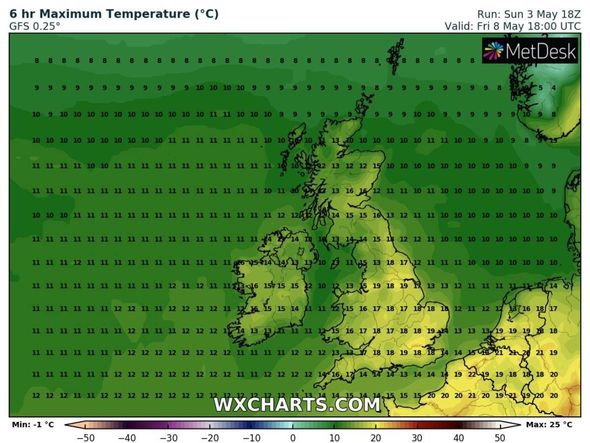 Rutland in eastern England got the most of this – it received 172 percent of April sunshine when compared with its long-term average.

And the Isle of Wight received a generous 279 hours of sunshine overall.

It was a dry month too; In terms of rainfall, the UK received just 40 percent of its April average.